An Interview with Morgan Hunt, author of Bad Moon Rising 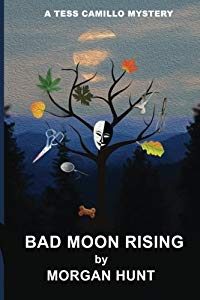 Ashland writer Morgan Hunt has written mystery novels, poetry, screenplays, short stories, and magazine articles, including Writer’s Digest. Her poems have been published in the California Quarterly, San Diego Mensan, and she’s considered one of the Oregon Poetic Voices. Hunt’s short story, “The Answer Box,” placed as a Finalist in the 2014 Saturday Evening Post Great American Fiction contest and in 2016 she published We the Peeps: A Political Caper and Wish Fulfillment.

Morgan Hunt grew up on the Jersey shore. She is a Navy veteran and a licensed ultralight pilot. She has lived with an aggressive form of breast cancer for more than 15 years.

Her Tess Camillo mystery series (Sticky Fingers, Fool on the Hill, Blinded by the Light) won a Best Books Award (USA Book News) and a National Indie Excellence Award. We talked about book four in that series: Bad Moon Rising.

Ed Battistella: Congratulations on Bad Moon Rising, the fourth in the Tess Camillo series. Tell us a little bit about Tess’s current adventure, which is set in Ashland. It features OSF, SOU and even some cameos from locals.

Morgan Hunt: I decided to set this Tess Camillo mystery in Ashland and to make it an engaging tale. I also wanted to convey to readers my personal sense of gratitude for the Ashland community. I knew theater would be involved (hey, it’s Ashland!), but I also wanted to write about ordinary things — lesser known eateries, a hair salon, cannabis farms, pub trivia, hiking trails, etc. I wanted to give readers a sense of Ashland they couldn’t get from a Wikipedia article.

EB: How did you get interested in the Voynich manuscript?

MH:It was one of those accidentally-on-purpose writer things, Ed. On a “What should my next writing project be?” day, I Googled various provocative terms and phrases to see what would turn up. When I searched for “most mysterious,” Google listed the Voynich Manuscript as the “most mysterious” ancient manuscript. Further research showed me that many scholars had become obsessed, almost addicted, to its study. That gave me an emotional path into the story. An aside: In September 2017, when I’d written two-thirds of Bad Moon Rising, a researcher and TV personality, Nicholas Gibbs, announced that he had translated the Voynich. Headlines popped up all over about his view that Voynich script was a form of Latin shorthand. I held my breath and kept writing. By the time I had edited the final manuscript, Gibbs’ theory had been debunked.

EB: Tess is from New Jersey—like you (and me!). How does she fit into Ashland? She seems rather bemused at times.

MH: Bemused; hmm; yes, I love that word. I am definitely bemused at certain aspects of, shall we say, Ashlandia? I pull about 65-70% of Tess from my own life. And like most writers, I use hyperbole and other devices to create humor, conflict, etc. While there are certain social sectors of Ashland that I may not be wildly comfortable with due to my east coast working class background, most of the Jersey references are there for fish-out-of-water humor. Great question, which makes sense since you’re a Jersey dude!

EB: How did you come up with some of the other characters. Are they based on real people? I’m especially curious about Jefferson Graham and Echo Sapien? 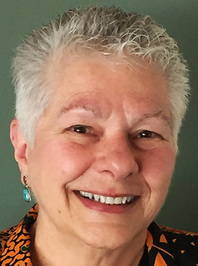 MH: Neither Jefferson Graham nor Echo Sapien is based on a real person. Both are amalgams of my imagination, and a certain trait I may have encountered here and there. Jefferson Graham’s secret craving came about to foreshadow the theme of obsession. Most of us are obsessed with something – food, alcohol, drugs, relationships, religious fervor, politics. Inevitably that affects us. As for Echo, I do know a bit about the NSA because I was married to a Navy cryptologist who later worked as an NSA analyst. When we were married, I met enough of his social circle to absorb the type, I think. As a writer, one of the most delightful challenges of Bad Moon Rising was to see if, in the middle of a book, I could pivot from one sidekick-helper figure to another. And back again. I’ll leave it to readers as to whether I succeeded.

EB: I loved the device of the bargain-basement hearing aid. Did that really happen to someone?

MH: By the time I needed hearing aids, I’d heard enough cautionary tales to avoid that pitfall, but it’s happened to many. I had fun working with the device. Reading “Monkey Vicodin” still makes me smile.

EB: Tell us about the cover, which neatly previews some plot points. Who designed that?

MH: I designed front cover, Ed. Thank you for noticing the details. I went through at least five or six different designs until I landed on one that reflected the sometimes-whimsical, sometimes-macabre, but always-Pacific Northwest-flavored story.

EB: I enjoyed the pace of the book. Any tips for other writing working on pacing?

MH: Honestly, I don’t have any tips to offer, but pacing is an aspect of my writing I’ve been working to improve. I appreciate the encouragement.

EB: Thanks for talking with us. Good luck with Bad Moon Rising!

MH: Thanks for the opportunity to be part of Literary Ashland!