An Interview with Vinnie Kinsella 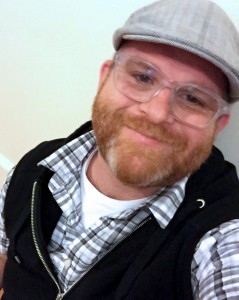 Portland-based Vinnie Kinsella is an author and publications consultant with a long history of making books. It all began for him in the second grade, when he worked with his fellow students to write and illustrate a story about the adventures of an ice-cream-loving giraffe. Since then he has worked as a writer, editor, book designer, publisher, workshop presenter, and college instructor. He currently uses his broad knowledge of the publishing industry to assist and educate self-published authors and small presses. He is the author of A Little Bit of Advice for Self-Publishers.

His latest book, Fashionably Late: Gay, Bi, and Trans Men Who Came Out Later in Life, is an anthology offering an insightful look into the triumphs and struggles of coming out as gay, bi, or trans after years of living with a straight or cisgender identity.

VK: Thanks for having me! Fashionably Late is a nonfiction anthology that examines the lives of gay, bisexual, and transgender men who came out well into adulthood. It offers an honest look at both the triumphs and struggles men face when they choose to come out after decades of hiding their true sexual and gender identities. The stories in this collection explore a wide range of topics, including dating members of the same sex for the first time, conversion therapy, divorce, coming out to aging parents, and transitioning from female to male during middle age.

EB: What prompted you to take on this project?

VK: This book is rooted in my experience as a gay man who came out at thirty-four. At the time, I thought I was an anomaly, as most of my peers came out in their late teens or early twenties. After starting a social-support group for others like me, I discovered that I wasn’t as much of an anomaly as I thought I was. Since starting the group, I’ve met hundreds of men who came out well into adulthood, some even as late as their seventies. I was always on the lookout for resources for these men. As someone who takes comfort in books, I found it frustrating how few there were that spoke to the experiences of men like me and the ones in my group. I wanted to create a book that offers these men a chorus of voices to let them know they aren’t alone and to offer them affirmation. Essentially, I decided to create the book I wanted to read when I came out.

EB: What did you learn in the course of compiling and editing the material? What stood out for you?

VK: What stood out to me was how universal the emotional journey of coming out is. No matter what the circumstances are that lead a man to come out, and no matter what he is coming out as, it always boils down to him rejecting a narrative that says his otherness is something to be ashamed of. What I found fascinating in each story was learning what it was that brought the author to that point. No two men get to that point the same way, and an anthology underscores that reality more than a solo memoir does. It shows that there is no right way to come out—there’s just your way.

Another thing this anthology did for me was challenge my own concept of what in means to be out of the closet. Like most people, I saw it as an event. I had this idea that once I came out to everyone on my list of people I wanted to come out to, I was officially out. But it’s not that cut and dry. You can be out to family but not to coworkers, or out to friends and not to family. I also didn’t consider that you can come out of one type of closet and enter into another type of closet. This is addressed in some of the trans stories, where a trans man who is seen and treated as male now questions whether or not to disclose he was raised female. Through examining the concept of coming out from so many angles, I have concluded that coming out is a lifestyle, not an event. Every new person I meet, every new social group I become a part of, I am given the choice to come out or to keep my identity as a gay man hidden.

EB: How did you select the contributors? 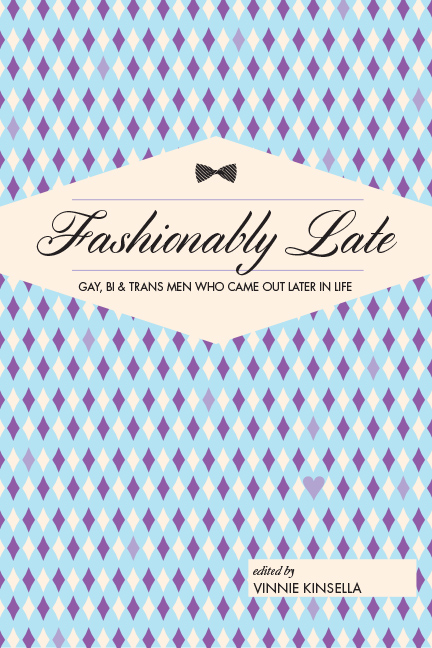 VK: I did two rounds of submission calls. The first round was broad and resulted in a good base for the anthology. For the second round, I specified what topics I was looking for. There were topics I knew needed to be covered in the anthology that didn’t get covered in the first round, such as stories about men who found a way to remain friends with their wives after coming out. In addition to the two submission rounds, I also solicited a few stories directly from the authors.

EB: Fashionably Late is about men’s coming out stories? Do you have a sequel planned on women’s stories?

VK: Yes! It has been my intention from the start to approach this as a series. However, I won’t start work on a women’s edition until I find the right editor to work with, and that editor must be a woman. To do the book justice, I feel it’s important for me to take a behind-the-scenes role as series editor and let a woman step in as the volume’s editor.

EB: As an editor and book designer yourself, how did you like the process of putting the book together. Were that any issue that stood out for you?

VK: I always enjoy the process of making a book. If I didn’t, I would be in a lot of trouble career-wise! The editing and design processes didn’t differ all that much for me as when I work on someone else’s book. Since I try to approach each book I work on with the same care as I would my own, I didn’t really do anything different from what I normally do. That said, this was the most emotionally challenging book I’ve ever had to edit because I was so close to the content. There were several times I had to take a break from editing because an author’s experience resonated so deeply with my own that I had to just stop and process my feelings before I could move on. There was a bit of therapy through editing going on.

The part of the process that challenged me most was working to promote the book. I’m used to just handing a finished book off to the author or publisher and letting them do their own promotional work. Having to spend so much time coming up with strategies to promote the book and then doing the actual work of making the book visible pushed me out of my comfort zone. Like most authors, I would prefer to skip the promotional work and just hope the book will magically find its way to readers. But I know from years of working in the industry that it never happens that way. When it got to be too much for me, I would just step back and say, “Somewhere out there is a man who needs this book. He can’t find it if he’s never heard of it. I have to do all I can to make sure he hears about it.” When I could flip the switch from thinking of promotion as something that is self-centered (“Hey, look at me and my book!”) to something that is audience-centered (“Hey, here’s the book you are looking for!”), that put me in the right headspace to keep doing the work I needed to do.

EB: Were all of the contributors writers?

VK: Most of them were. And if you look at their bios, they have pretty impressive credentials. There was only one contributor who doesn’t call himself a writer, but he’s still a great storyteller. His was one of the stories I solicited. I heard him share it at two separate LGBTQ storytelling events, and I wanted it. I worked with him to take what he had written as a spoken story and tweak it for print.

EB: What was your role as an editor?

VK: My role as the editor was to first shape the anthology itself. I had to review every submission and decide which ones fit and which ones didn’t. After that, I went through each accepted story and performed a standard line edit, cleaning up any issues with the language and flagging areas where some added clarity from the author would be helpful. This was mostly asking authors to add a line or two that would define for readers a lesser-known term he used or to clarify his connection to another character in the story. After that, I passed the collection on to the proofreaders.

One editorial decision I made that was a bit different was to intentionally work with proofreaders who didn’t share any of the authors’ gender or sexual identities. I worked with straight, cisgender women whom I knew to be LGBTQ allies. In particular, I asked the lead proofreader to act as a stand-in for the book’s secondary audience: straight and cisgender friends and family of men coming out later in life. I gave her freedom to ask any questions she might have about the content as she worked. This is a bit abnormal, as proofreaders generally don’t focus on content. But I figured if she didn’t know what the content was saying, than it was a safe bet that others in my secondary audience wouldn’t either. Fortunately, she didn’t have many questions, but it was helpful to find out where things could be clarified a bit more for the sake of readers seeking to better understand a group of people they aren’t a part of. It was important for me from the onset that this book also serve as an educational tool for people wanting to be allies to their loved ones, so I took care to keep that audience in mind during the editing process.

EB: I know you recently had a launch. What has been the reaction to the book?

VK: The response has been amazing! I’ve already begun to receive emails and Facebook messages from recently out older men who discovered the book and wanted to share with me the impact it has had on them. I’ve also been thanked by straight readers who found it helpful for building empathy for these men. And as weird as it sounds to consider this as praise, I’ve had people tell me they had to stop reading the book in public because the content was moving them to tears. I understand that those tears are coming from a place of finding their own struggles reflected on the page, but it’s still a bit odd to have someone say, “This book made me cry,” and know it’s a complement. However, the feedback that has meant the most to me has been people saying that the book offers hope. That’s what I wanted it to do from the start.

EB: Thanks for talking with us. Good luck with Fashionably Late.

VK: Thanks for having me! I hope your readers who choose the pick up the book enjoy it!