An Interview with Louis Sahagun, author of Master of the Mysteries 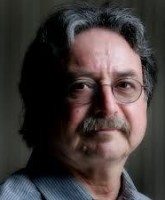 Louis Sahagun is a senior staff writer at the Los Angeles Times writing on issues ranging from religion, culture and the environment to crime, politics and water. He was on the team of Los Angeles Times writers that earned the Pulitzer Prize in public service for a series on Latinos in Southern California and the team that was a finalist in 2015 for the Pulitzer Prize in breaking news. He is a CCNMA: Latino Journalists of California board member and the author of Master of the Mysteries: the Life of Manly Palmer Hall, which was recently issued in an expanded revised edition by Feral House Press.

You can hear Louis Sahagun speak in Ashland at Friday Wine and Words at Weisinger’s Winery, September 23, at 6 pm.

EB: I enjoyed your revised edition of Master of the Mysteries. I had only heard a little about Manly P. Hall before. Can you tell our readers a bit about him?

LS: Manly Palmer Hall – a huge avocado of a man, six feet four inches tall and wide in the center with piercing blue eyes and chiseled features – helped give birth to a vibrant subculture in California comprised of mystically-inclined artists, authors, entertainment industry and civic leaders who continue to have a profound influence on movies, television, music, books and art.

The 20th century’s most prolific writer on ancient philosophies, magic and mysticism, Hall authored hundreds of books and delivered more than 8,000 lectures—many of them from a throne-like chair at his Mayan-style headquarters in the Hollywood Hills. His works introduced people to obscure spiritual texts and symbols of the remote past at a time when Los Angeles was unfolding into a metropolis.

The arc of his life is a story worthy of Raymond Chandler. Hall, who never knew his father, was abandoned by his mother and never finished sixth grade, was 18 when he arrived in Los Angeles in 1919. A decade later, he was dazzling the rich and famous and counseling heads of church and state. Adherents referred to him as “Maestro” and “adept,” and whispered of his supernatural powers and membership in secret societies.

His death under bizarre and suspicious circumstances in 1990 triggered a Los Angeles Police Department homicide investigation. Investigators believe he was murdered by his apprentice and the case remains an open-ended Hollywood murder mystery.

The endurance of Hall’s works sets him apart from the thousands of other mystics and gurus who brought spiritualism to Los Angeles at the turn of the last century. His writings continue to sell steadily around the world.

LS: It all started with a phone call I took late on Sept. 2, 1990, while working night reporting duty at the Los Angeles Times. “Manly P. Hall, the greatest philosopher of our time, has died,” a tipster told me. “You better get an obituary ready.” I was immediately skeptical, of course, because the newsroom gets lots of phone calls like that late at night on weekends.

A few minutes later, I was in the paper’s morgue, sorting through hundreds of news clippings about the man dating back to the 1920s.

I was on a tight deadline and the paper had room for a 10-graph obituary. It began: “Manly Palmer Hall, an eclectic philosopher and founder of the Philosophical Research Society, has died at 89, the society reported Sunday. The peripatetic philosopher, who authored more than 200 books and gave more than 8,000 lectures—many of them from a throne-like chair at the society’s Los Angeles headquarters—died in his sleep Wednesday of natural causes, a spokesman said.”

I decided to write the book a few years later, after learning that suspicious circumstances surrounding Hall’s death had prompted a homicide investigation, and that the chief suspect was Daniel Fritz, the tipster who called The Times on Sept. 2, 1990.

EB: What was his book The Secret Teachings of All Ages?

LS: Hall was only 27 when he published his introduction to ancient symbols and secret traditions, An Encyclopedic Outline of Masonic, Hermetic, Qabbalistic and Rosicrucian Symbolical Philosophy, also known as The Secret Teachings of All Ages and “the Big Book.”

Overnight, this immense book, which is filled with dream-like illustrations and uses Roman numerals instead of standard page numbers, ushered in a new era of appreciation for ancient religions and symbols and rocketed Hall into the national spotlight. Ninety years later, with more than a million copies sold, The Secret Teachings of All Ages, remains one of the most popular introductions to esoteric traditions.

EB: He wrote that in his twenties. How did he come about all the occult knowledge to do that?

LS: The occult knowledge in his so-called Big Book was gleaned from books he owned, borrowed, or had checked out from the Los Angeles Public Library. Beyond that, Hall, a self-taught writer with a photographic memory, was driven by a burning desire to explore lost and hidden traditions.

EB: Hall was a confidante of many Hollywood celebrities. Can you tell us a bit about some of them? 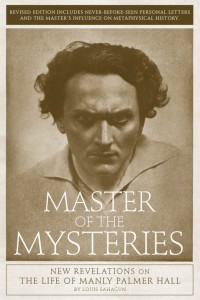 LS: Many actors and entertainment industry leaders were drawn to psychics and metaphysicians. In the late 1920s, for example, designer Natacha Rambova, an expert on metaphysical teachings and a friend of Hall’s, attended séances to communicate with the spirit of her late husband, the silent screen lover Valentino.

In 1938, Hall scripted an occult murder mystery for Warner Brothers titled When Were You Born? It starred his friend, actress and ardent astrologer Anna May Wong.

For horror film star Karloff, Hall developed a screenplay called Witch’s Sabbath, the tale of a robber baron in medieval times who sells his soul to the devil. For friend Lugosi, who was already bankrupt and 50 years old when his masterpiece Dracula was released in 1931, he researched and prepared movie proposals.

In 1940, Hall and Lugosi teamed up for a publicity gimmick to promote Lugosi’s fourth film with Karloff, Black Friday: A promotional film trailer purported to show Hall, with a nurse at his side, hypnotizing Lugosi for his small role in the movie.

On April 21, 1955, Hall accompanied Lugosi, then 72, to Los Angeles General Hospital, to kick his morphine habit. Lugosi told reporters that he had been addicted to the drug since he was wounded in World War I.

Lugosi entered Metropolitan State Hospital in Norwalk, Calif. Three months later, he was released and married his fifth and last bride, Hope Linninger, in the living room of Hall’s home.

A little more than a year later, Lugosi was found dead in the bedroom of his Hollywood home, clinging to a script of what he had hoped would be his next movie, The Final Curtain.

EB: Hall’s death was mysterious also. How so?

LS: On Aug. 23, 1990, Hall, who was 89 at the time and showing signs of senility, signed documents that turned over his assets to his chief assistant Daniel Fritz, wedging out his second wife, Marie, and stepchildren who were to inherit everything, according to the last will and testament he had signed nearly two decades earlier.

At that time, Hall was receiving almost daily enema treatments from Fritz, a self-styled expert in alternative medicine. Fritz claimed he learned that particular enema technique from “ancient Essene documents” he’d discovered in the Vatican archives. He had borrowed tens of thousands of dollars from Hall to market an “Essene” enema gadget he called “Water Angel.”

Six days later, on Aug. 29, 1990, Fritz telephoned a local mortuary to report that his boss had died in bed at his home of natural causes.

The corpse collectors and the Halls’ family physician were horrified by what they saw in Hall’s bedroom. Hall’s body lay on a bed without a single wrinkle; thousands of ants streamed from his ears, nose and mouth. Fritz and his helpers were hauling Hall’s clothes and valuables from the home to his car.

The physician, growing increasingly suspicious, rescinded the death certificate he had signed a few hours earlier.

In 2001, Fritz was diagnosed with adrenal cancer. He refused standard chemotherapy and tried to cure himself by ingesting enormous quantities of compounds that federal researchers say actually cause cancer.

LS: Hall introduced thousands of readers to sages and seers from Francis Bacon to Gandhi. Long before the Gnostic Gospels were translated into 21st-century bestsellers, Hall was promoting Gnostic beliefs as windows on the origins of Christianity. Before mainstream publications were touting doctors who incorporated a warm and friendly manner into their practice, Hall was urging physicians to also pay closer attention to their patients’ mental and spiritual well-being and offer a handclasp and a smile.

Before the advent of blockbuster movies with mythical settings such as Star Wars, Lord of the Rings and Harry Potter, Hall co-scripted the first major picture with an astrological plotline and actively encouraged entertainment industry leaders to grow new markets by producing more movies and radio programs based on the spiritual visions and allegories of early civilizations in which, as he put it, “sorrow, suffering and loneliness are builders of character.”

These were not inconsiderable accomplishments for a high school dropout from a broken home in rural Canada.

EB: Your book is wonderfully illustrated with reproductions of Hall’s book covers, photos, programs for talks and lectures and more. How did you get access to all this material?

LS: This book is the product of 10 years of research. I relied heavily on his essays, books, memoirs and unpublished letters, as well as court records, testimonies and interviews with his widow, step-children, friends and associates around the world, homicide investigators and coroner’s officials.

I was given permission to reprint material from the archives at the Philosophical Research Society, which Hall founded in 1934. The striking portraits of Hall and his first wife, Fay, are from the William Mortensen Archives at the University of Arizona. Many other photos and images were provided by friends, business associates and relatives of Hall’s.

LS: I am a senior staff writer at the Los Angeles Times, specializing in coverage of environmental issues. I teach a course in environmental journalism. I am planning a new book: a modern history of the water wars between Owens Valley and the City of Los Angeles.

LS: Thank for your interest. All best.