An Interview with Jason Gurley, author of Eleanor 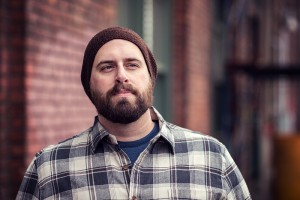 Portland author Jason Gurley is the author of the novels Greatfall, The Man Who Ended the World, The Settlers, The Colonists, and the short story collection Deep Breath Hold Tight. His novel Eleanor was acquired by Crown Publishing in the U.S., HarperCollins in the U.K., and will be translated into Turkish, German, and Portuguese.
Gurley’s short fiction has appeared in Lightspeed Magazine and the anthologies, among them Loosed Upon the World and Help Fund My Robot Army!!!

On September 7, he will be reading at Bloomsbury Books in Ashland at 7 pm.

You can learn more about this work at www.jasongurley.com.

JG: I come from Alaska, and from Texas; I’ve spent half my life or more divided between those two very different homes. I started writing as a kid, but got serious about it in high school, when a very special writing teacher lit a fire under me. These days I spend just about all of my time in Portland, Oregon, with my family. By day I design software interfaces, and in the evenings or on weekends, I write stories.

EB: How did the idea for Eleanor come about?

JG: In retrospect, it’s far easier to understand what Eleanor was and where it came from, but at the time, it was quite mysterious to me. I was in my early twenties and returning from a holiday road trip to the Oregon coast, and in the wee early hours — when you’re driving in the pre-dawn hours, your mind wanders, you know — a very particular sentence came to me: For all of her life, Eleanor had been falling. That struck me as a nice line, and I knew nothing about this Eleanor character, so as I drove, I toyed with the line, building on it. And by the time I reached home — Reno, at the time — I had the rough shape of the story.
Looking back, however, it’s clear that Eleanor emerged from the things I was most struggling with in my life at that time. And while the novel that you’ve read is nothing like the novel it was then, there’s still a great deal of myself and my own fears and questions in this book.

EB: Is a psychological story but also about alternate realities but also a family story that features a fouteen-year old protagonist. Who is your ideal reader or audience?

JG: Oh, I think it’s me. I try my best not to think too much about a particular reader as I’m writing; I find that, for me, imagining the preferences or desires or tastes of the eventual audience will steer me away from writing something honest. I tend to write the weird little stories that capture my own imagination, and if there are people in the world who are interested in that, too, then it all shakes out just fine. I’m a rather emotional writer, too; if a scene wrecks me, I’m doing something right. And Eleanor wrecked me, many times over.

EB: Was it difficulty to write from the point of view of a fourteen-year-old girl?

JG: You know, I’ve been asked many times why I chose to write from that particular point of view, but I’m not sure if anyone’s asked me if it was difficult to do so. That’s an interesting wrinkle. I suppose I’d say yes, because I’ve never been a fourteen-year-old girl, and I’m sure I missed quite a bit of the nuance that makes a young girl’s voice unique. But Eleanor’s also deeply curious, very quiet; she listens rather than speaks; she longs for a past that never quite belonged to her. I have many things in common with this character, and I hope those things come through with an honesty that brings her even more to life for a reader.

EB: I liked the way that the fantastical elements combined with the story of Eleanor’s family’s grief. Do you think that fantasy or just stories help us cope with the world?

JG: Absolutely. Perhaps more so in our youth, although the novel certainly throws that hypothesis out the window. Writing stories has always helped me in that regard, though I’m not always aware of it at the time. The women in this novel are at the mercy of consequences, with so little control over the events that set these repercussions in motion. I found it interesting to explore how their interior lives might blur the lines of reality and fantasy, to see if grief was something that might break down the boundaries between what’s real and what isn’t. But the other realities that surface in this book aren’t the same for everyone; some take comfort in it, while others are far more exposed and vulnerable.

EB: You wrote Eleanor over a long period with several breaks from it. Do you find it’s helpful to put a project aside and then come back to it fresh? Did it cause you to rethink the characters or plot? 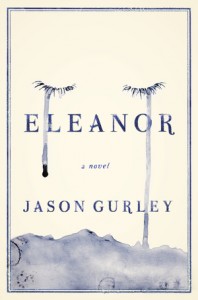 JG: As I get older I find myself doing this more and more. I’ve been working on a new project since late 2014, and it seems to reveal itself to me in enormous waves. Now and then I have to put it aside and let myself think about it for a while, and inevitably, I’ll discover some little maneuver, some new facet that catches the light in a different way, and it will cause me to reconsider much of the book. That doesn’t mean it isn’t frustrating; it can be. But it does seem to be part of my ill-defined process these days.

With Eleanor the periods away from the novel were both short and long, both intentional and un-. The novel took nearly fifteen years, but of course that wasn’t fifteen uninterrupted years of writing. There were false starts, entire drafts thrown away, diversions and detours. Those were as important as the writing time, in the end; in those gaps, I grew up, had more experiences, met and married my wife, became a father. All of those things informed the novel that Eleanor became, and I think it’s a far better book as a result.

Of course, I’d like to write my next book a little more quickly.

EB: You’ve released some of your previous books yourself and this time are trying Crown Publishing. How would you compare the two experiences?

JG: Both experiences have been so rewarding, in both different and similar ways. I self-published a novel, The Man Who Ended the World, in early 2013, and it was a revelation for me. At that point in my life, I’d been writing novels for about sixteen years — and aside from my family and a few friends, none of them had ever been read. That first step into self-publishing led me to readers, and that was utterly intoxicating and terrifying and wonderful. Some of those readers have stuck with me, which I’m grateful for.

Working with my editors at Crown, and watching a novel born into the world with the assistance of so many other people, has been a wild experience as well. There are things that, as a self-published author, I couldn’t easily achieve on my own — and yet my publisher accomplishes them with ease. I still get a charge when I walk into an unfamiliar bookstore and see my own novel on the shelf, usually a stone’s throw from David Guterson or Lev Grossman.

EB: Given the way, this book evolved, what do you think about the future of the publishing business and the ability of authors to work in different modes of publishing? Are things getting more flexible for authors?

JG: Oh, that certainly seems to be the case. There are more roads for authors to take than ever before, and I think that’s a good thing for authors, and mostly a good thing for readers. The volume of books that appear in the world each day has certainly increased; it’s both harder and easier to find something to read these days. Harder in the sense that there’s much more to sort through; easier in that there are far more people writing in narrow niches now than ever before, so readers with very particular tastes may find that they’re no longer limited to the one or two authors of whom they’d previously been aware. It’s certainly an interesting time for people who love books.

EB: What do you do when you are not writing books?

JG: I spend as much time as I can with my family. Recently, the majority of that time has been spent packing and unpacking, or making little changes to our new home. My happiest times are spent reading with my four-year-old daughter, or having tickle fights. And if I’m not doing that, I can usually be found in one of my few holy places: in a bookstore, at a ballgame, in a movie theater, or at a good diner, reading a book.

EB: Any future projects you’d like to let folks know about?

JG: At the moment I’m working on a young adult novel, which is an exciting new adventure. I’ve got an idea for a collection of short stories, or perhaps a very weird novel, that I’ll indulge eventually. At any given moment I have one project on my plate, and about fifty attempting to distract me from writing it. If I can focus on one, I’m good.

EB: Thanks for talking with us. I really enjoyed Eleanor.

JG: It’s been my pleasure, Ed — thanks for having me, and for giving my book a chance!

1 Response to An Interview with Jason Gurley, author of Eleanor