An interview with Molly Best Tinsley, author of BEHIND THE WATERFALL 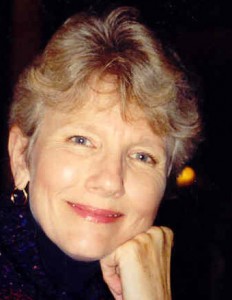 Award winning aurthor, Molly Best Tinsley taught on the civilian faculty at the United States Naval Academy for twenty years and is that institution’s first professor emerita. She is the author of My Life with Darwin (Houghton Mifflin) and Throwing Knives (Ohio State University Press), Broken Angels, Entering the Blue Stone. She has also co-authored the textbook The Creative Process (St. Martin’s) and the spy thriller Satan’s Chamber. Her work has earned two fellowships from the National Endowment for the Arts, the Sandstone Prize, and the Oregon Book Award.

Molly Best Tinsley lives in Oregon, where she divides her time between Ashland and Portland. We sat down to talk about her most recent book, the young adult novel, Behind the Waterfall.

EB: Tell us a little about Behind the Waterfall.

MT: Behind the waterfall that cascades down one side of Table Rock Mountain lies the threshold to the invisible realm of Thrae. Governed by Wedron (the Lord of Wonder), Thrae is Earth turned inside out. As a young woman, Agnes Eagleman inadvertently visited this realm before the novel begins, and as a consequence, she and her children, the twins Chetan and Nashota and their half-sister Shyla, have been on the move for over a decade. The story opens on the day the family has returned to the area, and as it unfolds, the kids learn what they have been running from. With the discovery comes a mission that drastically changes their lives.

EB: How did you get the idea for Behind the Waterfall?

MT: Behind the Waterfall began with a question/complaint from my eleven-year-old twin grandsons: Why aren’t there more books about twins? “I don’t know,” I told them, “but maybe we should write one.” Despite their reservations–they had lacrosse practice and trombone lessons and tons of homework–we began brainstorming right away and soon we had a rough idea of a story featuring twin brothers. But since we live on opposite sides of the country, progress was slow. There were big bursts of activity before, during, and after a visit, and then the manuscript simmered on a back burner until the next get-together.
Once we had maybe a third of the first draft, I took it along on a visit to their seven-year-old cousin, a girl, and read it to her. She had only one improvement to suggest: “These guys need a younger sister.” So I went back to the beginning and wrote Shyla into the narrative.

EB: Do your consultants want to follow in your footsteps and become writers?

MT: The real-life twins are now older than the fictional twins at the beginning of the story. Their chief preoccupations are things like taking college boards, passing their driver’s tests, and hanging out with friends. The model for their younger sister Shyla, now in middle school–is more into performance–music and acting.

EB: Was it difficult for you to write in a teen voice or for teens?

MT: Actually, my inner adolescent is very much alive, shuttling between hopeful wonder and cynicism. Teens are in the business of questioning the assumptions that grown-ups take for granted, and I think in general the teen voice borrows from the kid who blurted that the Emperor had no clothes. Shyla’s voice in Behind the Waterfall may not be on the cutting edge of the latest slang, but I think it conjures a precocious, astute observer of human nature.

EB: Are there particular matters of style or genre that work better in writing for young adults than for adults? 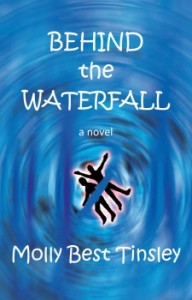 MT: Departures from realism are widely popular with teen readers. In fact, all the books my real-life collaborators mentioned as favorites had fantasy components, and that seemed to be the path we would follow. The real-life twins started us out with an idea: when the fictional twins turn fifteen, each discovers he has a special power. Soon after, the fictional twins learn of their mission, which will require them to use these powers.

I was soon an enthusiastic participant in the fantasy, conjuring a realm parallel to the earth of the five senses, or perhaps contained within it. Mix-ups between the realms generated comedy, and as is so often the case with fantasy and science fiction, the building of an alternate world becomes an opportunity to comment on the real one.

EB: What sorts of things did you read as a teen?

MT: In 7th grade, I devoured a series of baseball novels, modeled on the Brooklyn Dodgers. Yes, it was that long ago! Then I graduated to mysteries, Agatha Christie, Erle Stanley Gardner. Around the same time, my mother began insisting I read “the classics”–she plucked Wuthering Heights off the library shelf when I was 13. At some point when I was in high school, we acquired a set of the Harvard Classics bound in fake leather. I began plowing through those–diligently reading every word of some of those nineteenth century tomes and probably retaining only a tiny per cent.

EB: Will we see more of the Eaglemans?

MT: The three siblings are ready for their next adventure: I’m waiting for readers to make suggestions as to what form it might take.