An Interview with Mari Gayatri Stein, author of Out of the Blue Valise 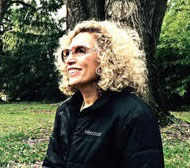 Mari Gayatri Stein is the author of eleven books and the illustrator of many others. She has contributed regular articles to such publications as Inquiring Mind, The Medford Mail Tribune, Tea Magazine, and The Healing Garden Journal. Stein has been an actor and traded her Hollywood hometown for an organic farm in Oregon where she lives with her husband and a pair of rescue dogs. In addition to her work as an artist and writer, she teaches meditation and yoga and works with women in recovery.

You can find more of her work at Gypsy Dog Press and soon at mariswebsite.com.

EB: Out of the Blue Valise is something of a departure for you as a writer. How did the book come about?

MGS: It began with a birthday gift: an adorable stuffed hippo who föted (Hippoease for flatulence). Po had a powerful personality. She became my constant companion. Po loved driving through the countryside with the top down, eating chocolate—she pronounced it shokolad, and couldn’t get her fill of British mysteries. In the winter, Po, my husband Robert, Mumbles and Snowflake (our rescue dogs) and I migrated to Malibu to escape the Oregon chill. After several days of meditating on the oh-so-blue breaking waves below the bluffs, Po and I began writing a story about a hippopotamus in search of authenticity, love and cheap thrills. Our pilgrimage commenced. We were on a magical mission. The scribbles became chapters, proliferated into The Po Pages and eventually morphed into Out of the Blue Valise. The compelling factor that changed Po from a frivolous bedtime story to a novel with serious intent (still retaining its whimsical nature) was cancer. Out of the Blue Valise became a book within a book and gathered gravitas.

EB: You got a veritable wonderland of curious animal characters—a shape changing hippo, a multilingual zebra, a frog. Why did you choose to focus the story around endangered animals?

MGS: We are all endangered species. Our very globe is imperiled. Human beings are complicated, self-involved and absent most of the time. Animals are innocents and utterly present. These pure souls are our saviors. They expand our hearts as spontaneously as a smile erupts on our faces when we see them, touch them, breath them in, admire and sit in awe of them. It is down to us to save them from extinction. Genocide and specicide are the nemesis of all that is sacred and spiritual. The endangered animals have the ability to break open our hearts, and by so doing they ignite our compassion and rescue us from ourselves.

EB: This is very much a healing fantasy. What is the role of fantasy in our lives, do you think? Escape, healing, something else?

MGS: Thank you. That was the intention—to delight, inspire, heal and provide sanctuary within the pages of Blue Valise. Humans have forgotten how to be happy. Fantasy and whimsy are inherent in our childlike nature and bring out the best in us. They are the antidote to earnestness and discontent. Life without humor is tyranny. Humor allows me to keep my boots on the ground and at the same time surrender to the joy of the moment. That is the magic of Po and her crew. Fantasy is the chocolate icing on her chocolate cake.

The writing of Blue Valise gave me refuge while dealing with cancer twice in two years; a safe place to dwell where meaning and purpose existed. Po’s world made me happy and lent equanimity to endless days filled with life and death scenarios. It buffered me against self-obsession, implosion, worry, doubt and fear.

Our fantasies, imagination and stories keep our hearts tender. They do offer escape, and they heal us. What is real or unreal? In the core of the Blue Valise lies the answer to this conundrum.

EB: Can you explain the idea of the blue valise to our readers? 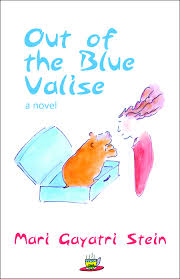 MGS: The blue valise is packed for the ultimate journey within and without. When Petal lifts the lid and Po leaps into her arms, all things become possible. The valise reveals a bevy of characters and global adventures. Estranged twin British aristocrats will reconcile their differences by collaborating in the rescue of an endangered hippo held hostage in Africa. A lonely and victimized zebra with red stripes will be sneaked out of a Paris zoo by Petal’s bosom friend Dr. Jake. Characters will hippomorphosize—change size with a secret password, and finally defeat a supersized villain out for blood. And more.

Everything exists within the blue valise. All at once, Petal faces her demons and dreams and there is no turning back.

EB: You are also an illustrator, so I’m curious about the ways in which the visual dimension might inform your writing.

MGS: The pictures provide the subtext. In the same way that a friend’s expression and body language reveal more about her than the words issuing from her lips, my illustrations divulge a character’s true identity. They offer intimacy and insight into our hearts and souls—our humanity. No apology. No prevarication. No debate. Nice or nasty, drawings are the unspoken balloons above our heads. Imagine if today, every time you engaged with someone, you told the absolute truth. (Wouldn’t that be a treat?) That is the luxury of my illustrations. They dare say and do what I dare not.

EB: This is your debut novel. How was it different from your earlier books? Was it harder to write? Easier?

MGS: Different, much harder, and at the same time effortless as the inevitable can be, like gulping water when you are parched. I loved writing Blue Valise. This arduous discipline took me over. In previous books, the art starred and words filled the supporting roles. In Blue Valise, words reign. I wrote every day for three and a half years, no matter what—through two bouts of surgery and radiation in addition to the demands and rituals of family and daily life maintenance. My Higher Hippo ruled the creative monarchy. Po dubbed me invincible. Suddenly, I could breathe underwater. I could fall through the atmosphere unscathed. The book was my lifeline, and I was determined to outlive its publication.

EB: I really enjoyed some of the wordplay. I hope I can find a chance to use “hippomorphosize.” It seem like you had a lot of fun writing this.

MGS: Drop it into a sentence at your next cocktail party. It’s a very handy word and rolls off the tongue.

I had a ball. I am bored between books—in limbo. But no worries, a massive novel calls my name—a pile of patient folders stacked in a red Chinese box tucked away on the bookshelf in my office whisper daily. Stay turned. This one should keep me alive for the next five years. Words are my favorite playmates. I love my thesaurus—yes, a real book with frayed corners and glued-together pages.

The first draft is the hardest part for me and always daunting, but I have learned to sit still and face the blank slice of paper like a warrior. Once I start editing and playing with the text, I am in heaven.

MGS: Post-Po production and catch-up. I am writing blogs for my new website: mariswebsite.com. They include a recent adventure at the Portland zoo where I fed and petted a rhino and hippo, a story about spirituality and recovery from addiction, the diary of my new found friend, Penelope, our resident peahen who adopted us as her flock, and sequels to earlier blogs about cancer and hip surgery. After that, I will launch my new novel. The title remains top secret.

MGS: Thanks for asking. Po and I had a great time. Join us for tea in the bamboo garden. Po will uncover your mantra. We shall hippomorphosize and dance through the fields.

One Response to An Interview with Mari Gayatri Stein, author of Out of the Blue Valise