An Interview with Josh Gross, author of THE FUNERAL PAPERS 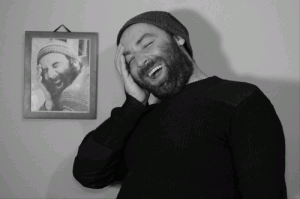 Josh Gross, a southern Oregon native and Portland State alumnus, is a journalist, playwright and author of four books. His most recent book, a memoir called The Funeral Papers, is the story of Gross and his estranged father who died two years ago.

EB: Tell us a little about The Funeral Papers?

JG: My father and I didn’t really speak for the 15 years before he died. A major contributing factor to that was that I saw his self-identity as a writer as an excuse he used to not get a job or be a good parent. It might have been different if he’d ever produced anything. But it was a classic “those who talk don’t do, and those who do don’t talk,” situation. He talked about being a writer all the time, but never seemed to put pen to paper. So imagine my surprise when at his funeral I was given a manilla envelope of his collected works. It sort of threw everything I thought I knew about him, about us, into a tailspin. The Funeral Papers is a curated collection of his writing, my reactions to it, and postcards of our relationship and his passing that investigate how and why it all went sideways to see if there was another man beyond the one I thought I knew, and if forgiveness is even possible.

EB: What made you decide to write this memoir?

JG: It started as a journal entry about how weird his funeral was—and I say that as someone that has been to a funeral that turned into a dance party. It pretty much turned into an open mic, with accordion players, and stories about his time in the special forces with Elvis, and bizarre advice on grieving from his new age friends. It was as funny as it was intense. But while I was writing that I realized a couple things. 1. Since I was going to have to dig into his collected works anyhow, this would be a good means to cope with that process. 2. Since my failings as a child are myriad, and since he didn’t get any recognition in life, this might be a way to do something for him posthumously. 3. Cynically: the overly-honest, incredibly raw family memoir tends to sell well, and it was already half-written for me.

EB: You refer to this as a co-memoir. What do you think your father would say?

JG: Jeez. If I knew that, I probably wouldn’t have had to write this book. Hayo!

EB: Do you and your father share any literary influences?

JG: Not that I can tell. He gave me a lot of books, but it usually went badly because he was obsessed with grooming me to be a religious leader—but in really surreal ways. For example: he once got it in his head that I should read Lord of the Flies. Which sort of makes sense, since it’s generally required reading for high schoolers. Thing is, I was like, six at the time. So when I refused, he read it to me against my will. And when I was too horrified and uncomfortable to continue and started crying, he took me to the movie. In high school, he somehow acquired a really nice vintage Italian-imported bass guitar made by JG guitars (meaning my initials were built into the headstock in abalone, which was pretty sweet), and said I could have it for free, if I’d just read a book he wanted me to read. The book was called Autobiography of an Awakening, and though it was only 152 pages long, it took me three months to finish because it was so condescending and boring I literally fell asleep every four pages or so. At the end, I had to take a quiz. It remains, the worst book I’ve ever read. I would actually pay the cover price just to save someone else from it. Short version: Arnie really liked poetry and spirituality and I liked stories about robots—which in many ways is a succinct metaphor for our inability to connect.

EB: What do you want readers to take away from the book?

JG: A desire for readers to try to see and understand their parents as people independent of them. 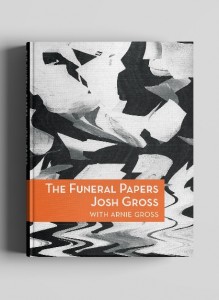 EB: A major component of Arnie’s personal history in the book is his involvement in the Sausalito Houseboat Community, both as a resident and columnist for the local paper. When you talk about the Sausalito houseboat wars (the decade-long legal and occasionally physical fight between the county and residents of the houseboat community over the legal status of their homes, a major event in Bay Area history), you describe Arnie as “one of the people who didn’t know he was in a fight.” Can you elaborate?

JG: I mean that the way he spoke and wrote about it treated it as a tall tale, as a caper, rather than as a choice between two paths, and that he could affect what which path was taken through his actions. He was quick to talk about the police raids, and the pranks, but never about organizing against the county in court or fighting back. Basically, it’s pretty clear in his first-person account of the Houseboat Wars (which I’ve included as an appendix in the book) that though he lived there for more than a decade, he viewed the conflict as an outsider, or as something that was happening around him, rather than something that he was a part of, and could influence. And because of that, he was never part of the victory. I think that in this age of gentrification, that’s an especially important element of the book to grasp.

EB: How did your family and your father’s friends react to the project?

JG: I don’t think any my father’s friends know about it yet, so I can’t say. But with this sort of nonfiction, you can’t worry too much about what other people might think because it can lead to self-censorship.

That said, if I were to speculate, I’m not sure they’d like it. For one: they didn’t experience Arnie the same way I did, so we have very different perspectives, and mine, is at times, quite caustic. For two: There are major cultural and generational conflicts that formed much of Arnie and I’s inability to connect, and they are as much a part of that as he is. For three: The biggest part of his writing that I cut from the final text was a collection of newspaper profiles of his friends, yet to his friends, those pieces would probably comprise the core of his writing, despite their being of no interest to anyone else.

EB: What have you got planned for your own funeral?

JG: I’d like animatronics and speakers to be installed in my body so that at the flip of a switch, my body will rise from my grave and say, “if I’m going out, then you’re all coming with me.” That’d be hilarious. Then karaoke. Basically, I’d want to Andy Kaufman the shit out of it. That would be a celebration of the way I like to live my life, just as much as his funeral was a celebration of the strange, confusing, and often wildly misleading way he liked to live his.

EB: What other projects have you got in the works?

JG: I run a small theater company and our next big production is my musical comedy adaptation of H.P. Lovecraft’s The Call of Cthulhu. The script was written earlier this year, and I’m finishing up the music right now for a fall production. After that, we’ll be staging another script of mine, The Manifesto Monologues, a true-crime drama about three famous murderers. This summer I’m also probably going to start the script for the musical follow-up to the Cthulhu adaptation, Robopocalypse: The Musical, and either revisit the existing draft of another memoir I wrote about my time in youth prison, or novelize a sitcom pitch I wrote last year with a friend in the film industry.

You can check out Josh Gross’s book trailer here: