An Interview with Ellie Alexander

Ellie Alexander is a Pacific Northwest writer who loves testing pastry recipes. Her work (as Kate Dyer-Seeley) has appeared in The Columbian, The Vancouver Voice, Seattle Backpacker, Portland Family Magazine, and Climbing Magazine. 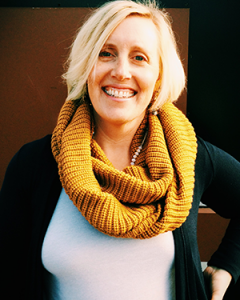 EB: How did you decide to set Meet Your Baker in Ashland, with an Oregon Shakespeare Festival subplot?

AE: My family and I used to come to Ashland for the Oregon Shakespeare Festival growing up. It’s such an idyllic setting. One of the things that I find unique about it as a setting is that there are almost two towns within Ashland. Visitors travel from all over the globe to catch a production at OSF, but then when the theater is dark for the season Ashland becomes a small town again. I think that makes for a very rich setting—there are always new characters rolling in to shake things up, or to kill off.

Shakespeare sets the ultimate stage for drama. I enjoy weaving in quotes from the bard and details about the history of the theater. And Ashland has so much more to offer from its gorgeous parks and hiking trails, to its thriving art community, surrounding wineries, farms, the Rogue River, Mt. Ashland. I could go on and on.

EB: Can you tell our readers a bit about your background?

AE: My degree is in speech therapy. I worked in an early invention program for years before shifting my focus to writing full time. In college I minored in creative writing, but I didn’t know what I wanted to write. I wrote a lot of horrible first drafts that ended up in the recycling and I read everything that I could get my hands on from literary fiction to sci-fi to non-fiction and historical fiction. In hindsight that time was invaluable to me.

Aspiring writers often ask me for advice and the first thing I tell them is to read. You can’t be a writer in my opinion if you’re not a reader first.

I freelanced for a while before taking the plunge into writing fiction. I wrote for a variety of magazines and newspapers. That experience helped strengthen my writing. I worked with editors who gave me feedback and suggestions to tighten my story. I had to meet deadlines, and finesse a story arch. My speech therapy background also come into play. When I’m writing dialog I will go to a coffee shop or a park and take extensive notes on how people are talking—all the nuances of their speech—just like I used to when I was working in the field. I hope that it makes the dialog in my books very believable.

EB: Did you grow up in Ashland? Is part of the book at all autobiographical? Are you Jules Capshaw? Are you a baker? Was your father a Shakespeare buff? 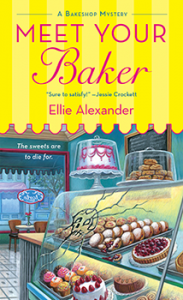 AE: I grew up in Vancouver, Washington. I came to Ashland frequently with my family and on school field trips. Yes, my dad is a Shakespeare buff. He taught high school honors English and introduced me to Shakespeare at a young age. One summer my parents threw a Midsummer Night’s Eve party, where everyone came in Elizabethan costumes and were assigned roles. I was Peaseblossom. I spent weeks making a fairy dress with my mom. My dad spent weeks crafting an authentic menu. In addition to his literary knowledge he’s an incredible cook. In fact a number of his recipes appear in the books, like his recipe for Chocolate Hazelnut Torte.

My mom got me hooked on mysteries at a young age. We would walk to the local library each week and I would return with a stack of books to devour. She was also an amazing baker. There would always be homemade pies, cookies, and cakes waiting for my brother, sister and me when we got home from school. Many of her recipes are in the books as well, like her Raspberry Danish.

Like Jules I love to bake. After I hit my word count, I’ll spend time testing recipes in my kitchen. Food is such a love language and I think she and I both show our love for friends and family through food. However she’s a trained pastry chef. I’m not. She’s also much more romantic than me.

She has just returned home to Ashland after spending the last ten years working as a pastry chef on a cruise ship. She’s left her husband on the ship and is coming home to mend her broken heart. I love writing Jules. She’s a romantic—blame it on the name—but despite the fact that her heart has been broken she’s not broken. I think that’s an important distinction.

EB: How has Ashland changed?

AE: It’s changed over the years, but the core downtown plaza still feels much the same to me. That’s a good thing. When I was working on Meet Your Baker, I interviewed a number of business owners and they talked about the ebb and flow of tourists in town. Longstanding businesses do well and can weather the off season, but many small business owners shared that some of their friends and colleagues have opened businesses at the start of the season with no plan for the slower winter months and have ended up having to close their doors.

I appreciate that downtown is still predominately small businesses. There’s so much gentrification that’s happening in the Pacific Northwest, and it would break my heart to see that happen in Ashland.

EB: Meet Your Baker is a cozy mystery. What’s the attraction of that genre to you as a writer, and in your opinion, to readers?

AE: I got hooked on cozies mysteries with Nancy Drew and Trixie Belden. One summer in early high school I read all of Agatha Christie’s books. Cozy mysteries are escapism at its best. They take readers on a quest to figure out whodunit, with a dash of romance and plenty of page-turning twists. They’re typically light reads without gratuitous violence, featuring amateur sleuths who stumble into solving a mystery while going about their everyday lives. The reader has the same opportunity as the sleuth to solve the puzzle. I think that’s one of the reasons the genre continues to be so popular. Even though cozy mysteries are lighter reads they’re still cerebral. You have to use your brain to piece all of the clues together. That’s my favorite part of writing mysteries—I want to keep the reader guessing all the way up until the very end.

I also read them like travelogues. I’m a sucker for anything set in the English countryside. That’s my goal in writing this series—to give readers at taste (pun intended) of the Pacific Northwest. I’ve received email from readers all over the country who’ve had said they can’t wait to visit Ashland now that they’ve read the book. That’s the best compliment I could ever receive.

EB: Meet Your Baker is the first in the series and the next is coming out this very soon. What happens in A Batter of Life and Death? 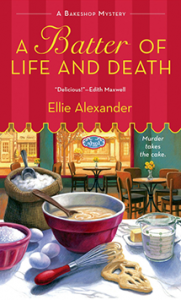 AE: In A Batter of Life and Death Jules is going to be competing in a television bake-off, Take the Cake. The Pastry Channel is in town to film the popular competition that pits top chefs against each other in a culinary challenge. She’s a bit camera shy, but the top prize is $25,000 and Torte is in desperate need of new ovens so she agrees to compete. Just as she starts to feel more comfortable in the spotlight, one of her fellow contestants is discovered buried in buttercream. Of course Jules is on the case and in the mix for murder!

I’m so excited about this next installment. Readers are going to get to know Jules and the team at Torte a little better and there are some delicious recipes that I can’t wait to share.

EB: You are a full-time writer. What’s your writing life like? Any tips for aspiring writers?

AE: I do my best work in the early morning hours. I write a minimum of 2,000 words every day. That structure works for me. Then in the afternoon I get outside and go for a walk or hike, or spend time in the kitchen testing new recipes.

Before I start writing I sketch out the story. I know exactly what every character is hiding and lying about, what red herrings I’m going to use to throw readers off the scent of the killer, and who the killer is. After I’ve made my initial sketch I write a thirty page outline. From there I start working on the first draft. I don’t do any editing as I write. Instead I keep notebooks next to my laptop to jot down things that I need to change or come back to. Once I have a complete first draft I print out a copy and set it away for a few weeks or more. I find that having some distance helps tremendously. After I’ve taken a break from it I’ll go back over it and incorporate all the notes I made along the way. It usually takes me at least two or three more drafts before it’s ready to send to my editor.

As far as advice goes—read! I know I already said it, but it’s worth repeating. And write daily. I think new writers sometimes believe that they have to wait for the muse to strike. I used to think that too when I wrote all those terrible first drafts, but what I’ve realized is that the discipline of sitting down and writing every day makes you a better writer. Or at least able to hit word count. Set a daily writing goal. Writing is like any muscle in your body. If you don’t use it, it’s not going to get any stronger.

AE: Thanks so much for having me!