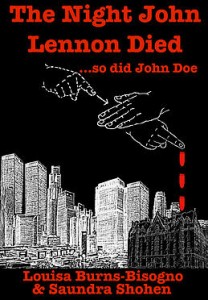 Louisa Burns-Bisogno is an award-winning screenwriter, director, author, and international media consultant with over 100 on-screen credits including My Body, My Child and Bridge to Silence. She has written stories and scripts for popular American daytime series and received a Writers Guild of America East Award for Outstanding Achievement. She is an adjunct professor of playwriting, screenwriting and webisode development at Western Connecticut State University.

Saundra Shohen was administrator of the Emergency Department at Roosevelt Hospital. She also she served as Vice-President of Program Development and Media Relations for PRISM International. She was on the New York City Mayor’s Task Force on Rape and was a judge for the Emmy Awards for programs addressing teenage suicide, drug abuse and alcoholism. She has written radio scripts for the Voice of America focused on health issues and has edited many books for other authors.

Burns-Bisogno and Shohen recently published a novel based on the events of December 8, 1980. We talked with them about The Night John Lennon Died: …so did John Doe

EB: I really enjoyed your novel, The Night John Lennon Died … so did John Doe. I understand it’s based in part on your own experience on the night that John Lennon was shot. Can you tell our readers a bit more?

SS: Since I was the Administrator of the ER at Roosevelt Hospital on December 8th, 1980 and was part of the ER team on call when John Lennon was brought in, the events of that night are as clear to me today as they were 35 years ago. The last chapter (The Death of John Lennon) in my book, EMERGENCY! (published by St. Martin’s Press) is the ‘jumping off’ point for The Night John Lennon Died…so did John Doe. Everything in our novel about John Lennon which transpired that night reflects my actual remembrance and experiences. However, our character Annie is spending her first shift in the chaos of that night. I was already a seasoned ER Administrator. I managed many breaking news stories of famous people brought into our ER for myriad reasons. So everything you read about the events of that moment in history in the Roosevelt Hospital ER are, in fact, entangled with my own history of that night.

EB: What prompted you to develop this novel?

SS: When I told my friend and co-author Louisa about a man who was in the trauma room next to John’s, had no I.D. and died within minutes of Lennon being pronounced, she was intrigued. We decided to write our book based on that unidentified patient, what his story would be and interweave it with the tragic murder of John Lennon.

EB: How fictional is the character of Annie Rolling? I have a new appreciation for the job of Hospital Administrators.

SS: Everything about Annie is fictional with some caveats. As is often true with authors’ work, there are moments and moods and circumstances that Louisa and I drew from our own histories. However, the clarification of those moments remains with us. The reader gets to experience Annie as her own beautiful, complex, strong, and sometimes over-the-top woman.

As far as Hospital Administrators, they do keep the cogs in the wheels oiled. Without policies and procedures, without budgets, without job descriptions, without meeting federal standards, the doctors and nurses and other personnel would not be able to do their jobs. Serving the public, and especially caring for people in times of medical needs, is a serious mandate. The Emergency Department (often referred to as the ER) is by far the most dynamic setting for 24/7 challenges.

EB: I was especially struck by the historical detail on the period and by the understanding of sign language and deaf culture. What sort of research did you have to do on these topics?

SS: Since I lived and worked in New York City and in the Roosevelt Hospital environs, the neighborhood supermarket, pharmacy, bank, diner, church, dry cleaners, Lincoln Center, Juilliard, the Dakota and more, were part of my daily experience. That made it easy.

However, it was Louisa who visited and did extensive research on the church – an important “character” in our novel. And she will tell you more about her fabulous attention to detail with everything from flight schedules to origins of last names to the history of Saint Paul the Apostle Church.

Major and integral ingredients in the fabric of the entire book are deaf culture and sign language. One of the most beloved characters is, in fact, deaf. Louisa, who has extraordinary knowledge of and history with this culture made the complete story come alive with her descriptive writing not only of narrative, but also capturing the unique dialogue of the deaf. I continue to be inspired by Louisa’s brilliance in how she brings to life the humanity and challenges of the deaf community.

LBB: Although the novel is pure fiction … it is fact. The story came alive because it was inspired by real people, so the situations were credible. Saundra’s experiences at Roosevelt Hospital were the springboard. The John Doe who died in the room next to John Lennon triggered my memory of a suspicious death I witnessed. While I could not generate a police investigation, I used my memory of this vulnerable cancer victim, an eighty year-old deaf man, to develop the main plot.

My brother was deaf and his family also deaf. When he was a young professional, opportunities were closed to the handicapped. The deaf club in our mystery provides a window into their community. The hearing impaired were undervalued in the past, but they had their dreams. They worked together to have as full lives as possible.

Most of the story is placed within seventeen blocks of Manhattan, from the Hudson River to Central Park. New York is extremely rich in culture–a fantastic stage to play out a story. I wanted to bring the reader to Artie and Annie’s neighborhood, hence the choice of specific locations including Juilliard and St. Paul the Apostle Church.

EB: You managed to not only keep the story moving briskly but also to create suspense by giving Annie plenty of problems to solve. Do you plot all these out in advance or did the story tell itself to you?

SS: Initially, we had many conversations about structure. From the start we determined that seven sections reflecting seven days, beginning with December 8, 1980 was the way to go. Short chapters within each part made for easy transition from scene to scene. We were clear on where the story would begin, and just as clear as to how the novel would end. Louisa, highly skilled in plot development, will tell you about the rest.

LBB: Mysteries usually begin with the crime. In our novel there were two murders at the outset. Lennon’s was solved the moment the police arrived at the scene of the crime and Mark David Chapman surrendered and was arrested. John Doe’s murder is known to the reader but not to the characters. When Annie sees the corpse’s hands and realizes he signed “murder” with his dying breath, she tries to get the authorities to investigate. She fails. So she is determined to solve the mystery herself.

After deciding on the structure—seven days—I plotted what would happen each day to move the story forward. Each day Annie discovers new information and clues about John Doe and the amazing deaf world.

There was also the need to incorporate critical backstory and weave in Annie’s personal relationships, especially with her daughter Rosie. When Rosie is attacked in her own home, Annie risks everything to solve the crime.

EB: Annie is quite an intriguing character, with a complicated backstory, family and love life, and a challenging job. Do you have any plans for a sequel?

LBB: Annie has many mysteries to solve. Her curiosity, courage, commitment and career make sequels a natural way to proceed. Indeed, her story has already appeared as a pilot script. It was chosen by the New York Chapter of the National Academy of Television Arts and Sciences for a stage reading at HBO. Six subsequent episodes complete the tv/cable series proposal. Currently we are polishing the feature film script based on our novel. Whether on the page or the big or little screen, Annie and her entourage are intriguing and have lots of stories to tell.

EB: What is it about hospitals and medicine that lend themselves to drama?

SS: Most of us have needed a hospital and/or ER at some point for ourselves or a relative or friend. The ER is a setting in which the drama of life and death are played out 24/7. I call it controlled chaos. The ‘cast of characters’ is endless…
physicians, physician assistants, nurses, nurses aides, clerks, housekeepers, social workers, security guards, patient reps, paramedics, x-ray techs, administrators. And let’s not forget the patients!

EB: What was the co-authoring process like for the two of you?

SS: Louisa and I spent more than two years writing and re-writing … thinking, talking, questioning, researching, contemplating, deciding, changing, laughing, growing to love our characters, crying with them when they were in pain, encouraging them as they found their way, worried for them when they went “over the edge.”

We also got to name various characters after beloved people in our lives. And in one case, for me, we named Malvina Ristorante for my mother, whose name was Malvina.

Most important for me was the constant inspiration I received as the result of Louisa’s brilliant storytelling.

LBB: I would not have completed this book without Saundra’s encouragement and input. We complemented each other. My strength is plot and dialogue. Saundra knows the world that Annie lives in…technically and emotionally. She is gifted in words.

After writing the first draft of a chapter, I’d pass it on to Saundra. She would give me extensive notes. We’d discuss details from our own points of view and expertise. Sometimes we’d disagree. Solutions came after animated discussion. The book benefitted greatly because of our yin and yang.

EB: What is your favorite book of all time and why?

SS: The Good Earth was published three years before I was born. It is by far my favorite book of all time. Set in various locales in China, I could almost smell the scent of the earth which sustained the characters–this as a result of author Pearl S. Buck’s extraordinary storytelling.

The Good Wife, Dallas and Downton Abby cannot compare with Buck’s dramatic challenges which her fully-developed characters experience. Issues of alcoholism, adultery and murder are woven into the universal societal behaviors in 1920’s China. Through flood and famine the generations survive and even flourish.

I was one year old when Pearl S. Buck won the Pulitzer Prize for this timeless novel. It remains, for me, a thrilling reading adventure.

You can visit the website for The Night John Lennon Died … so did John Doe here.