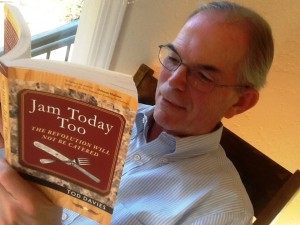 This summer I’m planning on catching up on some reading: Tod Davies’s Jam Today, Too: The Revolution Will Not Be Catered, a bunch of books by Megan Abbot and Wallace Stroby and whatever is new from John Sanford and James Lee Burke. And I’m hoping to get to José Saramago’s The Cave (suggested by Robert Arellano, Ivan Doig’s This House of Sky (suggested by Les AuCoin),

I asked some soon-to-be SOU grads what they were planning to read, once their course work was behind them.

Haley May is looking forward to Wanderlust by Rebecca Solnit, Confessions of an Eco-Sinner by Fred Pierce, Letter to a Christian Nation by Sam Harris, and The Magic of Reality by Richard Dawkins.

Julie Kanta recommends Adulting by Kelly Williams Brown, which she has already read but says has lots of great information on what to do after college. And it’s funny. She’ll be reading some books based on some of her favorite films: American Psycho, A Clockwork Orange, A Good Year, Out of Africa, and Stephen King’s short stories (Shawshank Redemption, The Green Mile, and more).

Kristy Evans is going to read The Ocean at the End of the Lane by Neil Gaiman and An Object of Beauty by Steve Martin, among (many) others.

Celia Johnson will be reading Infinite Jest by David Foster Wallace and Let’s Explore Diabetes with Owls by David Sedaris.

Lefty Barber would like to start The Game of Thrones series and work through the Collected Essays of David Foster Wallace.

Holly Deffenbaugh can’t wait to read is A Prayer For Owen Meany by John Irving and The Shantaram by Gregory David Roberts.

Daniel Alrick will be reading The Other America by Michael Harrington.

New dad Randal Lee will be reading Christianity and Liberalism by John Gresham Machen and All Quiet on the Western Front by Erich Maria Remarque.

Matthew Kent will be tackling Midnight’s Children and The Silmarillion.

And I heard from a few faculty colleagues too about their summer reading plans. Diana Maltz will be reading the Life of Pi, since she is planning on teaching a new class on The Animal in Literature in the fall.

Charlotte Haddella is planning to read both of Mary Szybist’s books: Incarnadine and Granted (Mary Sazbist will be the Chautauqua Poets and Writers headliner in the fall).

For fun, Bill Gholson will be reading All I Did Was Shoot Your Man: A Leonid McGill Mystery by Walter Moseley. He plans to read lots of nonfiction too starting with I Must Not Think Bad Thoughts by Mark Dery.

Margaret Perrow is looking forward to What is the What? by Dave Eggers and also hopes to finish The Kite Runner this summer.

Bobby Arellano is hitting the Oregon books with Sometimes a Great Notion by Ken Kesey and The Klamath Knot by David Rains Wallace.

Edwin Battistella’s latest book Dangerous Crooked Scoundrels will be released by Oxford University Press in March of 2020.
View all posts by Ed Battistella →
This entry was posted in What People Are Reading. Bookmark the permalink.

One Response to Summer 2014 — what are you reading?