The Food Blog, or the evolution of the online culinary narrative 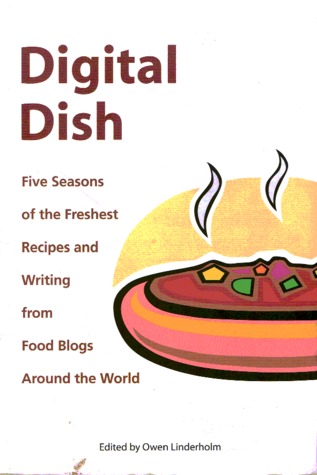 Published in 2005, Digital Dish compiled culinary bloggers’ notes, reflections and recipes before blogging was as huge a home industry and commercial tool as it is today. Linderholm says in his introduction, “At the time this book begins, in the summer of 2003, there were fewer than 50 food blogs that were easy to track down. By the time the book ends, in the summer of 2004, there were several hundred.”

Today it seems as if sites like Grub Street, Foodista, FoodNetwork, Christopher Kimball’s empire and Eater dominate, but no, the power of individual influencers reign: here’s Saveur’s vote, here’s HuffPo’s, here’s the Weblog Awards, now in it’s 14th year, the International Association of Culinary Professionals gives firsts to blogs in several categories, and there are several pretty big conferences dedicated to food blogging, among them: Foodista’s International Food Blogger Conference (bloggers get in for $95 watta deal!), BlogHer Food (food is just one of BlogHer’s content areas), and IACP (more professional, mixed culinary professions).

But back to Digital Dish: Five Seasons of the Freshest Recipes and Writing from Food Blogs Around the World. Organized by season and indexed by blog, recipe and main ingredient, the work provides a fascinating perspective on a transitional period in culinary narrative, as the web evolved into a more personal form populated by WordPress and at the same time more commercial, fueled by advertising. Digital Dish is text rich, with long musings, detailed recipes and comments by Linderholm. Brand names are almost never noted in ingredients or in the narratives. The urls of the blogs are convoluted typepad and BlogSpot addresses and are not optimized. There are few photos in Digital Dish, though the actual blog posting probably had more. Today, photos rule and text often takes a back seat or is even a no-show in blog entries. Bloggers are courted as paid brand ambassadors, their blogs openly promoting brand partners.

Researching each of the blogs noted in Digital Dish, and their bloggers would be a really interesting project; understanding the evolution and transformation of early influencers.

Sadly, some of the blogs cited in the work are no longer active – checking Spiceblog, hitting a domain for sale page.

Some of those that are active have migrated to later software with updated templates and contemporary color palettes, though again, for some, posts are infrequent or not current. Looka! last posted in 2013, commenting on the use of “weblog”, some distain resonates as he mentions the clipped, contemporary form, “blog”.

Some bloggers may have migrated to other digital platforms, as Sasha Wilson (A Girl’s Gotta Eat) seems to have done: “dudes, i moved to instagram. find me there. blogging regularly is totes too difficult for these crazy times. but i’ll update this here and there…”. And others may have moved to digital platforms managed by others, to share the work of keeping content current.

Ultimately, blogging is a huge investment of time and energy and so we have a debt to these early bloggers who made such an investment to an early digital narrative form. They paved the way for all who followed. My thanks too to Owen Linderholm for preserving these early writings in print, many probably now lost to time.

First posted to Goodreads.com in April 2014.