An Interview with Robert Antoni, author of As Flies to Whatless Boys 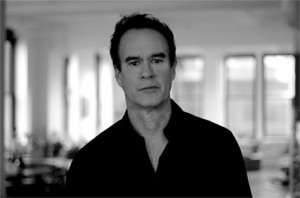 Antoni lives in Manhattan and teaches in the graduate writing program at The New School University. We recently had an opportunity to talk about his latest book, As Flies to Whatless Boys (Akashic Books, 2013).

EB:What prompted you to write this book?

RA: I was leafing through an old Trinidadian memoir, and in the Appendix I came across three paragraphs on John Adolphus Etzler, his machines, and his Tropical Emigration Society (TES). I was fascinated. But what struck me as still more amazing was a footnote to the description of Etzler: that despite the tragedy that ensued with his experiment, several well-known families were established in Trinidad. And last among the list was my mother’s surname, Tucker. Yet my mother had never heard of Etzler or the TES. The only story she knew was that our first relative to arrive from England in Trinidad, William Sanger Tucker, settled the rest of his family in Port of Spain, and left immediately with his fifteen-year-old son, Willy, into the jungle—she had no idea why. And six weeks later young Willy brought his father back to his family in a makeshift stretcher carried by himself, an African, and two Warrahoon Indians. He was dying of yellow fever, to which he succumbed following morning. That was all my mother knew. But suddenly I realized that my mother’s bizarre and horrific story made sense if the Tuckers had been part of Etzler’s experiment. I was determined to find out. So I went to the National Archives in Trinidad, and to the British Library in London, and I gathered together everything I could find about Etzler and his society—including his own published treatises, complete with mechanical drawings of his machines. And I began to pour through the mountain of photocopies, looking for the surname, Tucker. Eventually, I stumbled across it, again and again, and I realized that the Tuckers were indeed counted among Etzler’s first group of Pioneers to land in Trinidad. Not only that, William Sanger had been instrumental to building the Satellite, Etzler’s agrarian mechanism powered by the wind that would have planted the crops and performed all the labor upon the land. But the culmination of my research was the discovery of a letter, fished out of William Sanger’s pocket on his deathbed, and addressed to the editor of The Morning Star—the journal published in London that followed the progress of Etzler’s society, where the letter was mailed and eventually appeared. That letter is the only description we have of the settlement where Etzler’s great plan for humanity came to fruition, and met with its tragic end in a matter of weeks. Once I’d fond that letter, I was hooked. No turning back.

EB:I was fascinated by Willy’s language. How did you fashion Willy’s voice, with its particular cadence and creole-like grammar?

RA: That’s the language I grew up with. It’s the language of my grandfather on my mother’s side, who in his last years, lived with us in our home. He was also named William (a popular Tucker name—my own middle name, too). Having said that, Willy’s language is also an invention, a fabrication, including the grammar. It is an attempt to get that spoken language down on the page, in a way that is both readable and convincing—hopefully, even for readers who have never traveled to the West Indies. It’s the most agonizing and enjoyable aspect of my writing. And all of my books, to greater or lesser extent, are written in some form of West Indian vernacular—or vernaculars. It’s what I live for, as a writer anyway.

EB:Willy also used a lot on wonderful expressions like “What the arse” and terms like “to mongoose” “boobooloops” and “cockspraddle.” Are they authentic or a product of literary license?

RA: They’re both: a combination of well-known Trinidadian colloquialisms and invented words (which Trinis do as a matter of habit). “What the arse” comes from the contemporary “what the ass”—my attempt to make it feel both slightly archaic and British. A mongoose is of course that small rodent common in India (there are lots of East Indians in Trinidad who were brought initially as indentured laborers, and have contributed substantially to the culture and language). So a “mongoose” is commonly used by Trinis to mean a sly, shrewd, conniving, and artful scamp—like Etzler. The calypsonian, Lord Invader, had a popular song called “Sly Mongoose”. But as far as I know I’m the first person to use it as a verb. “Boobooloops” is a popular expression for an over-weight, ungainly, clumsy person—it’s one of those wonderful words that looks like its meaning. Finally “cockspraddle” should really be “catspraddle”, and anyone who has ever owned a cat will know exactly what that means. The thing is, I had already used two cat metaphors in that same paragraph, so I had to think of something else: I half-invented “cockspraddle”.

EB:The theme of language is all through the work. What did you have in mind by having Marguerete born without vocal cords? What is it she is unable to say?

RA: There is nothing she is unable to say in her silence. And in her curt notes to Willy, she says it more succinctly, perceptively, and profoundly than anybody else. But that’s precisely the point. That’s how she knocks Willy off his feet. Etzler and everybody else is all talk. But one of the reasons I wanted to make Marguerite mute was to have her contrast Miss Ramsol, the Director of the Trinidad National Archives who, in the contemporary strand of the story, is assisting the “author” (named Mr Robot, her pronunciation of Robert) with his research—which also turns into a romance. Miss Ramsol communicates to Mr Robot via emails written in what I call a “Trini-vernacular-cellphone-textspeak” (meaning that it contains lots of numerals, abbreviations, and not a single full stop). Miss Ramsol’s emails spill off the page, just like Etzler’s speeches and his own writing. But Miss Ramsol was the easiest character I have every written, and Marguerite was definitely the most difficult. For so long she felt contrived. I just couldn’t make her believable. Eventually my partner and first editor, Ali—an amazing writer herself—told me that Willy has to fall in love with Marguerite not in spite of the fact that she is mute, but because of it. That was exactly what I need to hear. It was the key to bringing her to life.

EB:The parallel love story between the writer Mr Robot and the archivist Ms. Ramsol, who lets him “subjuice” her. That seems to have been a lot of fun to write and an interesting commentary on evolution of language. What did you have in mind?

RA: The only thing I had in mind was to have fun.

EB:Is “subjuice” a real usage?” If not it should be.

RA: All mine, and thanks. 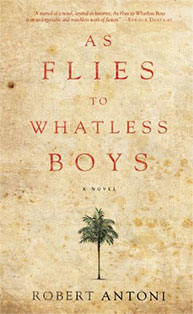 EB:The title alludes to the line from King Lear “As flies to wanton boys are we to th’ gods. They kill us for their sport.” Why “whatless”?

RA: It’s a fairly well known West Indian colloquialism meaning worthless, useless, eagerly destructive—basically without what. Contemporary spellings are wotless and wutless. But I wanted to go back to the origins of the word, almost as a way to suggest in that word the evolution of language (even though I knew that to spell it that way would piss some Trinis off—they’d say I got it wrong). But I wanted the word to appear familiar and at the same time a little strange to all of my readers, including my fellow Trinidadians. Also, I wanted to let my readers know, right from the title, what they were in for—language-wise at least. It’s like saying, right from the title, read at your own risk! Nobody who picks up the book can tell me I didn’t warn them! Of course, there are a million reasons for using the quote from Lear in my title, one being that there are parallels to Shakespeare’s play throughout the novel—including Gloucester’s blinding, the character who speaks the line of the title. I’m also, somewhat underhandedly, attempting to elevate the stature of my own story simply by association with the master. But Lear is Shakespeare’s history play that is also a family saga, and it is a tragedy, with ample comedy (thanks to the Fool and others), just like my own story. Last, I am constantly rewriting Shakespeare, and Walcott, and all of my mentor-masters-and mistresses, just as they did. What else can a writer do?

EB:What is your next project?

EB:Thanks for talking with us.