An interview with Tod Davies, author of Jam Today Too 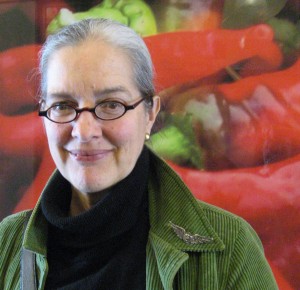 Tod Davies is the author of Snotty Saves the Day and Lily the Silent, both from The History of Arcadia series, and the cooking memoirs Jam Today: A Diary of Cooking With What You’ve Got and Jam Today Too: The Revolution Will Not Be Catered. She is the editorial director and publisher of Exterminating Angel Press and has worked as a screenwriter, film and television producer, social activist, radio show host, actor, and amateur cook.

Davies lives with her husband Alex, and their two dogs, dividing their time between Colestin, Oregon, Boulder, Colorado.

We sat down to talk about Jam Today Too.

EB: Jam Today Too is a memoir of great meals, and it’s revolutionary, spiritual, and funny. What were you aiming at?

TD: Wow, those are great targets! I don’t think I was consciously aiming at any of them, although come to think of it, they’re all combined in what I WAS aiming for: to really encourage everyone (and this includes myself most of all) to realize and act on the fact that any kind of positive change in the society at large has got to start with the individual. We all have, not just a stake in the world around us, but a responsibility to try to change things for the better. And we can do that. We can! I meet too many people who think the whole landscape is just too overwhelming, there’s nothing to be done, let’s just give up. Completely wrong, and, if I might be so bold, lazy, too. What we can do, every one of us, is become ever kinder, ever more knowledgeable about who we actually are and what we are actually doing. And then, most of all, what each one of us can do is learn what truly makes us and the people around us happy…and then get doing it! Honestly, a truly happy, balanced life is the single best contribution you can make to the polity. It’s contagious. Really. And food can help us find that happy balance.

EB: I like the way you’ve organized things into different life events: food for disasters, grief, home, friends and feasts food for oneself and, of course, food for thought. Where do you think our food associations come from?

TD: From our bodies, of course! What our bodies are trying (sometimes, these days, almost desperately) to tell us is who we are, and what are our real, authentic human needs. The more the poor body’s messages get drowned out by frantic media stimuli, drugs (recreational or otherwise), and/or commands that counter what the body needs, the farther we get away from what food really means to us. And since food is nourishment, and nourishment is what keeps us healthy and alive, we can see where obliterating that message is going to get us.

EB: How do you keep track of meals? Are you a food diarist?

TD: I used to be. I have a whole book chock full of menus from meals I particularly enjoyed with (sometimes hilarious) notes attached. Now I just find when a new recipe really impresses me, I want to sit down and write about the circumstances surrounding it. Hence the Jam Today series.

EB: You’re an advocate of cooking without worrying too much about recipes. Why? Do strict recipes get in the way?

TD: I think there’s a place for ‘strict’ recipes. They are terrific as a benchmark of a certain kind of excellence…if they’re good recipes. Certain cookbooks are great for this. Julia Child, of course—if you follow one of the recipes in “Mastering the Art of French Cooking,” you are going to get an undeniably excellent result. James Beard. Deborah Madison. And for every day cooking, Marion Cunningham. But what I’m trying to get across is the art of strengthening one’s personal autonomy through the meditation of cooking every day. If you interact with a recipe, instead of letting it dictate to you, you’re already starting to change your way of interacting with other authority sources as well—mass media, for example. You’re questioning, you’re interposing who you are into the stated ideal, you’re ACTING. That’s what I’m after. That’s what I’m always interested in supporting.

EB: Do you have a favorite non-recipe from the book? I’m personally excited to try the dried tomatoes.

TD: Really, my favorite non-recipe is the cup of tea. I make that every day of my life. And tea gives me more pleasure than red wine, even. Imagine that! (But I do have to admit, that dried tomato recipe is hugely useful in my kitchen. In fact, I have a bowl of them in the fridge even as we speak.)

EB: You’ve listed the cookbooks in your kitchen. Do you have a favorite or two? What are some must reads for cooks or eaters? 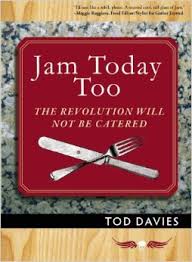 TD: I have a short bibliography in the book about both the cooking memoirs I love, and some of my favorite cookbooks. But there are so many. The ones I like best are the ones where you get a clear picture of the character of the person writing them. These are not necessarily always those that have a lot of prose attached to the recipes. Deborah Madison, for example, who I think can be called the Julia Child of vegetarian cooking. You just know from her recipes that she’s the kind of friend you would want to have if you were hit by some kind of personal disaster. She’d be right there, and she’d be able to give you the best advice. I love reading her recipes. Fergus Henderson, of St. John Restaurant, is another one where you just know you would love to sit down with him and a couple of glasses of wine. There are others.

Obviously M.F.K. Fisher is a must read for ANYONE, let alone anyone interested in food. And Elizabeth David is always a pleasure, though I must say, reading her you know she would probably look down on any “little person’s” efforts. That is a bit annoying of her. But she so loves what she’s doing that I tend to forgive her snobberies.

EB: Your husband is a vegetarian. How does that complicate your omnivoracity?

TD: It just adds another dimension to the never endingly fascinating game of deciding what we want to eat today. And I am really grateful to Alex for being a vegetarian. Twenty years ago it opened up a whole new world of cooking to me. He’s the one who got me onto brown rice. Which I now adore to the extent that I think white rice is an active bore. Thank you, Alex!

EB: You mention some bad meals you have had in restaurants. Do you have a favorite worst meal?

TD: We ate a meal in Hull, in England, that was so spectacularly awful, as well as poisonous, that I still remember it with something approaching awe. It was at a chain restaurant that shortly thereafter went bankrupt, and no wonder.

While the poisonous part of the meal is best left unmentioned, the bizarre part was the salad, which was composed of: Diced avocado. Canned tomato pulp. Partially defrosted frozen raspberries. And a blueberry-honey vinaigrette. It was the most astonishing desecration of the noble avocado I have ever come across. To this day I cannot get over how someone would do that to an avocado, when all you have to do for maximum enjoyment is cut one in half, take out the stone, squeeze a lemon over the whole thing, dab it with maybe a little soy sauce, and ENJOY.

That salad was so memorable, I wrote it into the script of the film we did later: THREE BUSINESSMEN. One of the businessmen orders it in the restaurant in Liverpool. He is exactly the kind of fool who would, too, that character.

EB: There seems to be a lot of umami. Is that a favorite flavor?

EB: After a flood, your kitchen was remodeled. What’s new?

TD: It’s pretty much the same kitchen—only better. It always had the perfect triangle for me of refrigerator, stove and sink, and it has always had a pretty view out the window of a meadow. But now the cabinets are actually beautiful and designed for my own uses. And best of all, oh heaven, the countertops are now granite. Before they were the weirdest, most useless display of tiny one inch avocado green tile. This kind of counter is impossible to keep clean. As well as being hideous. It was almost worth having a flood to get rid of it.

EB: You also have a section on the portrayal of men in the kitchen. Why are they portrayed as either geniuses or bunglers?

TD: For one thing, because both those images are of individualists unconnected to anyone or anything around them…and this is one of the major myths of our culture, the myth of the individual who triumphs or fails ALL ALONE. Both of these stereotypes come out of an idea that we all act in a kind of ideal void, separate from the actual web of community and event we are truly embedded within.

Most men I know—and certainly the ones I know who enjoy the arts of the kitchen—understand this. They understand that food is an opportunity for mutual celebration, rather than individual aggrandizement. It’s ‘look at us!’ rather than ‘look at me!’ I do think that attitude should get more acknowledgements in the mass media than it does.

EB: Thanks for talking with us. I’m off to try your recipe for “The World’s Best Upside-Down Adult Hamburger.”

TD: It’s fabulous, I promise. And don’t forget to fry more onions than you think you’ll actually need. You won’t regret it.