An Interview with Ben H. Winters, author of The Last Policeman and Countdown City

Ben H. Winters is the author of seven books, including his recent novels The Last Policeman, an Edgar Award winner, and its sequel Countdown City.

He is also the author of several books for young readers, including Literally Disturbed, (a book of scary poems), Sense and Sensibility and Sea Monsters (a New York Times bestseller), The Secret Life of Ms. Finkleman (Bank Street Best Children’s Book of 2011 and an Edgar Nominee). 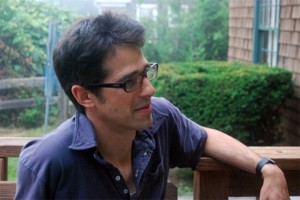 Ben Winters has also written for the theater, and was a 2009-2010 Fellow of the Dramatists Guild. His plays include ones for young audiences (The Midnight Ride of Paul Revere , A (Tooth) Fairy Tale and Uncle Pirate), and for adults (the Off-Broadway musical Slut and the jukebox musical Breaking Up Is Hard to Do). Ben Winters lives in Indianapolis.

We sat down on the internet to talk about his Last Policemen trilogy.

EB: Congratulations on all the awards for The Last Policeman, which not only received the 2012 Edgar Award from the Mystery Writers of America but was also named one of the Best Books of 2012 by Amazon.com and Slate. How does that make you feel as a writer? 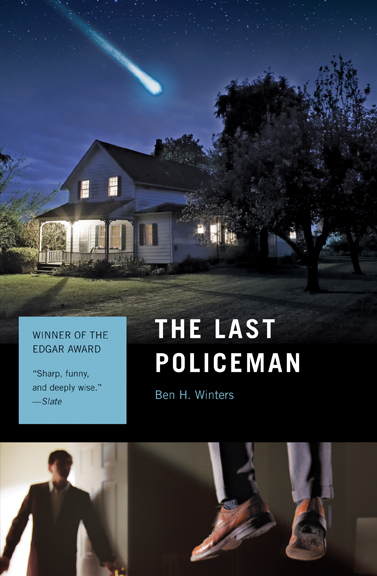 BW: Well, thank you. It makes me feel slightly less anxious about having chosen (or stumbled into) this as my profession. The question is always how much do that kind of recognition translate into interest from the general readership, but I try not to think about it, or I get a stomachache. But there’s no way it can be bad, you know?

EB: This is a wonderful concept. How did you come up with the idea of a pre-apocalyptic detective series?

BW: Thanks. I wish I knew, but I think good ideas are like Earth-destroying asteroids: you never know when one will come, right? I had wanted to do a detective novel for a long time, and I was trying to come at this well-worn genre with something we haven’t seen before.

EB: The detail -— both scientific and sociological -— is very convincing. How did you go about researching what might happen if an asteroid were about to hit the earth?

BW: By talking to a people who are smarter than me, basically. One astronomer in particular, a guy named Tim Spahr at the Harvard-Smithsonian Minor Planet Center, was extremely generous with his time. But I talked to tons of folks — economists, sociologists, detectives, beat cops, forensic pathologists — you name it. I am a real proponent of research in the writing of fiction; the fire of one’s imagination must be fed by the fuel gathered from reality. Or something like that.

EB: Why the Concord, New Hampshire setting? Are New York and Los Angeles already too pre-apolcalyptic?

BW: Actually, my first thought was to set this series in Brooklyn, which is probably the place I know best. But a New York crime novel often becomes about New York, and I had other fish to fry. Concord was perfect: small but not too small. smart but not ivory-tower smart. A real place where real people live and work.

EB: Let me ask you about the characters. I like Henry Palace, but I can’t quite explain his commitment to his work? Why does he do it? What drives him?

BW: Well there’s some backstory in there that I think probably informs the kind of cop he is, and the kind of man. But I think if you asked Hank, he wouldn’t quite get the question—he took an oath, you know? He has a job to do. He doesn’t understand the idea that the asteroid should in any way diminish people’s commitment to things (their jobs, their wives, their country, etc.) and as the series progresses that puzzlement at times becomes real anger.

EB: Henry’s sister Nico seems to have grown since the first book, and in Countdown City she plays an important role. It’s almost as if some people on the margins will become more responsible as the world ends. Is that what’s happening? Can you put us inside Nico’s head? 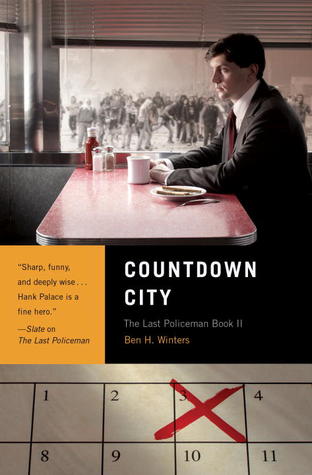 BW: Nico, like Henry, is doing her best to cope with the asteroid—it’s just that her means (joining a shadowy conspiracy-minded antigovernment organization) are opposite to his. She certainly would say that her actions are responsible; she thinks that she’s got the key to saving civilization, after all. Hank would say she’s being irresponsible and obnoxious, and she would say he’s being obtuse and square. The same things they’ve been saying about each other their whole lives.

EB: What do you enjoy most about writing this series?

BW: Probably the two (two!) separate marriage proposals people have sent—not for me, for Hank. The idea that people believe in him, and are rooting for him, might even be falling in love with him…incredible.

EB: You also write plays and books for young people. How do you keep your different writerly personas separate? Do you need to focus on certain things more in different genres?

BW: I mean, sure, you can’t use the word “fuck” as much writing, say, a play for kids about Paul Revere. But the basic idea of good storytelling is always the same: what’s the goal, what’s the obstacle? What are the hero’s flaws? Where are the conflicts, where are the resolutions? Good writing is good writing, you know—you can see it in an episode of The Wire or an episode of Sesame Street.

EB: The third—and final—installment is out in the summer of 2014. Anything you can tell us about what’s in story for Henry and Nico? And the world?

BW: Basically the set-up for the third book (titled World of Trouble, by the way) is that I wanted to get us right up to the end—it’s set two weeks before impact day—and push Henry way, way outside his comfort zone. So most of it takes place outside of Concord, where he’s spent his whole life, and he has none of his usual resources available to him. And (as they say in the biz) it’s his toughest case yet…

BW: Of course! Thanks for your thoughtful questions, and I’m glad you like the books.