An Interview with David A. Oas 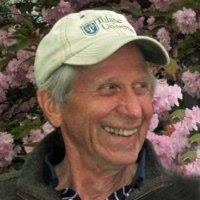 David A. Oas is Professor Emeritus of psychology at Southern Oregon University, having retired in 1997 to continue private practice as a clinical and forensic psychologist. In the 1970s he attended the University of Southern California Film School and wrote, produced and directed the film Raspberry Heaven now available as an Amazon Instant Video.

Ed Battistella: You’ve had an interesting career as clinical psychologist, screenwriter and a professor at Southern Oregon University. What inspired you to become a novelist?

David Oas: I wouldn’t call myself a novelist. I decided I would do an experiment in storytelling by expanding upon the limitations of screenplay writing to reveal character development through action, dialogue, and character reflections by the three main protagonists. I used the omniscient voice to give the storytelling breadth, depth and brevity. I chose to cut out physical descriptions of characters, and instead leveraged the ways characters acted so the readers could tap into my fictional world.

EB: How is writing a screenplay is different than writing a novel?

DO: Screenplays are written where setting, action, character name and dialogue move the story forward from one scene to the next. In directing my first feature film (Raspberry Heaven), each actor after selection by gender, age range, and informal interviews from a pool of actors, would take the script home overnight and come back the next day to do video-taped readings from selected scenes. Each actor chosen to play their part in the movie during production is then a part of my modified imagination as writer and director—often ending with contextual changes in the story I originally crafted. In collaboration with the cinematographer, scenes changed, new sides (script changes) were written revising actor’s dialogue, action sequences, and even settings (locations) based on time, weather and money. Movie making is a collaborative process unless you are writing only to sell screenplays.

I realized when writing my expanded story (somewhere between screenplay and historical fiction), my imagined characters kept changing with the environment on hand, i.e., much like a screenplay written for movie production. When writing historical fiction, my struggles with character interactions based on my emotions while writing were much the same as when writing screenplays. However, now I had the freedom (option) to write the actors (characters) reflections or escapes to the God upstairs, to complete a scene. This left me feeling less restricted in storytelling.

EB: What inspired you to write about the Vietnam War in Non-Official Cover Confessions? 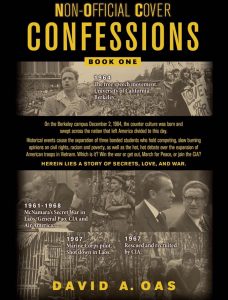 DO: The real inspiration was to write a much longer story that begins with the Free Speech Movement at UC/Berkeley December 2, 1964 and ending with the Iran/Contra Affair in 1987.

Non-Official Cover Confessions includes the Secret War in Laos, the Fall of Saigon, the

Disappearances of subversives in Argentina, the Dirty War and death squads in Nicaragua, and the Hostage Crisis in Lebanon.

Specifically, about the Vietnam War: I was a Navy pilot in training in 1957 which ended two years later when I refused to accept my wings and commission. I had a quarrel with the Admiral of the base. Enough said. Some of my pilot friends ended up in Vietnam.

When I began my career as a psychology professor at Southern Oregon University and as a licensed clinical psychologist, many Vietnam veterans and their families became my counselees and patients.

EB: Explain the book’s title. What is a “Non-Official Cover Agent?”

DO: In my story, Non-Official Cover Agents are CIA-hired operatives with no guidance from the CIA. The chain of command is vertical. All operatives live by code names or false identities only known to the individual who passes on the orders to the agent. All actions are classified with identities essentially erased after completion of the mission. Historically speaking, President Eisenhower began the Non-Official Cover classified secret program with a special group in 1957 (later identified as the 303 and 40 Committee) that has continued with all U.S. presidents through 1987, the year these two books end.

EB: How much of the books are drawn from personal experience?

DO: My best answer is that I lived through the period from 1964-1987. There was a hot war that ended and a cold war still going on.

EB: Does being a psychologist help inform your writing?

DO: Yes. I’m wedded to character development. Early in writing screenplays and books, I recognized I could not escape my life as a psychologist. I have lived my life in the midst of conscious and unconscious contradictions of others and myself. I have observed and experienced how the verities of love, sex, friendship and belonging get twisted by fears of intimacy, inadequacy, rejection, estrangement and finally loss of control over our lives.

If the reader is seeking psychological realism and truthfulness in human action, I hope they find that experience in reading Non-Official Cover Confessions: Books One and Two.

EB: The novel presents many different political opinions of the Vietnam war. Was it important for you to present a moral dilemma of sorts?

DO: Let’s include human rights violations with moral dilemmas. That’s the spine of both books. The historical events spanning the time between 1964-1987 remain divisive to this day. Some still say, “we should never have sent soldiers to Vietnam.” Others, “we should have the won the war in 1964 or 1968.”

Another question, “What was Reagan doing without congressional support by sending in the CIA to support dictatorships in South and Central America?” And quoting President Reagan, “We can’t have communism south of the U.S. border.”

The three protagonists play out their roles in taking different sides in the moral dilemmas presented as the story unfolds. The main protagonist is frozen in the middle: Is he a patriot or victim? Their stories and interactions with each other are told throughout the books with the emphasis on character development through dialogue, action and internal reflections.

Selectively chosen historical events to elucidate the divisive U.S. foreign policy decisions made over the two decades are identified in the books.

DO: I was in love with the research process for the two books. An abundance of resource material was on line for the divisive historical events taking place between 1964-1987. I have had a lifelong attraction to human dilemmas. During the above-stated time period, the United States, China and Russia defied the Non-Aggression Geneva Convention Accords of 1962 by fighting a secret war in Laos.

In South and Central America, was the Cold War worth the loss of life of ideologically left- leaning citizens who were redefined as revolutionaries, Marxists and Communists? Was buying arms from Iran paid for by unknown classified sources to support the Contras an attempt to overthrow the Sandinista government in Nicaragua? There were CIA-supported death squads in Nicaragua and Honduras targeted to neutralize so-called left leaning Marxists. Did the assassinations without a trial constitute human rights violations?

EB: What do you want readers to think about after reading Non-Official Cover Confessions?

DO: First, did the story work for the reader. Second, can the reader envision the two books adapted to screenplay formats for feature length movie production or a television series?

In the foreword of both books my last quote is my wish. “If there is a book you want to write,
write what should not be forgotten.” Isabel Allende.

EB: Non-Official Cover Confessions is the first of a series. Can you give us an idea of what is yet to come?

DO: Yes. The main protagonist pilots aircraft for secret missions throughout South America. He carries national security officials, regime officers, soldiers, mercenaries, prisoners and code-named CIA agents to and from what is called the Southern Cone that comprises five countries. With his paramilitary skills he then leads missions where he is part of the action. While in the war zones, many of the main protagonist’s actions become humanitarian efforts as his personal life becomes convoluted with loyalties, friendships and lovers.

The protagonist is later transferred to Central America to fly more missions into war zones. By this time, the code-named vertical command station has the protagonist leading death squads.

By 1983, the conflicted protagonist becomes a “hit man” in Lebanon to assassinate terrorists who are holding hostages for ransom. In the midst of all this action, a love story ebbs and flows beneath the radar.