An Interview with Les AuCoin, author of Catch and Release 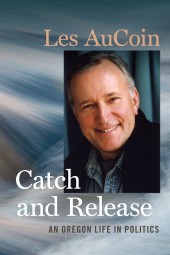 Les AuCoin was elected to the Oregon House of Representatives for two terms beginning in 1971 and was selected majority leader in 1973 at the age of thirty-one. He represented Oregon in the US House of Representatives for 18 years, from 1975 to 1993. The dean of the Oregon delegation and member of the House Appropriations Committee, he was described by the Oregonian as “the most powerful congressman in Oregon.” He helped create the U.S. Fish & Wildlife Forensics Laboratory in Ashland, the Seafood Consumer Research Center in Astoria, the Oregon Trail Center at Baker City, and the Lewis & Clark Visitors’ Center at Fort Clatsop. In 1992, he gave up his seat to run for the Senate.

AuCoin grew up in Redmond, attended Pacific University and Portland State University and served in the U.S. Army as a public information specialist. Trained as a journalist, he is award-winning magazine editor and public radio commentator, and his articles have appeared in major newspapers throughout the country. Today, he and his wife, Sue live in Portland.

His memoir, Catch and Release, has been published by Oregon State University Press.

Ed Battistella: I really enjoyed Catch and Release. Can you tell us a bit about the title?

Les AuCoin: Many will recognize the fly-fishing term, of course. I became an addicted fly-fisherman once I put Congress and politics behind me. As the years passed, I came to see catching and releasing as an allegory for my life. I “caught” a blissful early childhood until I had to release it when my dad turned out to be an addicted gambler who blew the family savings and abandoned us in the late 1940s, leaving my mom with two boys to raise on a waitress’ wage. In manhood, I “caught” a life someone with my background wasn’t expected to catch when I climbed to one of the top rungs of national politics. Although it ended with one of the most controversial and painful losses in modern Senate history, I like to think I let go of it with dignity and equanimity. If anything, I think the ethos of “catching and releasing” works better in life than in fishing. Besides, all we can ever do is toss out the best cast we can, the one thing we can control. What comes next is entirely up to the fish.

EB: I was impressed with your ability to find a dramatic moment in each of the vignettes you present—your father abandonment, the JFK assassination, your romance with your wife Sue, and much more.

LA: I’m glad you do. I didn’t set out to create drama. I wanted to share important memories from a life that turned out to be eventful. My good luck and bad seemed to heighten my capacity to observe. And not knowing what would happen next as a kid made me inquisitive. Inquisitiveness helped me find a way to stop James Watt from opening up the earthquake-prone western oceanic shelf to oil drilling. In a similar way, studied observation helped me identify the often unspoken but deeper desires of politicians. That, for example, is how I figured out how to get Jessie Helms’ right-wing Senate allies to drop their attempt to destroy the National Endowment for the Arts.

EB: A lot of political issues you dealt with, gay rights, legalization of marijuana, consumer rights issues, the environment are still in the news today. Where do you see progress as having been made since the seventies and eighties?

LA: Some issues that were venomous in my early career have become non-issues today. Guaranteeing LBGTQ citizens access to public accommodations was radioactive in 1973, when I was House Majority Leader in the Oregon Legislature. Today, gay marriage is legal in every state. Marijuana possession was a felony at the outset of my political career. I’m proud to have worked to make it a minor misdemeanor in Oregon in the mid-Seventies; today, ten states and the District of Columbia have legalized it for recreational use and 23 more allow it for medical use. As progress, that’s a sea change.

I wish I could say the same for the environment and consumer rights. Greed and its disciples are magnifying wealth disparity, and Trump and his acolytes are working to undo decades of progress on forest ecology, clean air and water, and protection for endangered and threatened species. That doesn’t even begin to describe Trump’s knuckle-dragging indifference to climate change, an existential threat to the earth and all its living things. The elections of 2020 may be our last best hope to reverse the destruction.

EB: You started your career as a journalist. What do you think of the state of journalism today?

LA: Once upon a time, it wasn’t hard to find news that was impartial, deep-digging, informative and fearlessly run by professional editors and program directors. Today, what’s left of newspapers is mostly run by the business office. Business values are not news values. We’re being entertained or titillated rather than informed. I’ve seen local TV coverage that devoted 10 to 15 minutes to a helicopter’s live coverage of an armed standoff at a warehouse where nothing happens. The station could have used the time to report on what it means if Northwest salmon go extinct. We risk becoming a nation of civic illiterates at a time when democracy faces an existential threat and economic, environmental, and scientific issues demand more sophistication than ever for their solution. Former Supreme Court Justice David Souter channeled Thomas Jefferson when he said, “An ignorant people can never be free.” It shouldn’t have surprised us that someone like Donald Trump could find his way into the presidency. I pray that Americans don’t let that stand.

EB: What convinced you to move on from electoral politics? You mentioned at one point that you felt like a telemarketer.

LA: In 1974, I won my seat in the US House for the first time. Back then, my opponent and I were limited by state law to $75,000 in our primary election and the same amount in our general election—for a total of $150,000. That law was struck down by the Oregon Supreme Court. Subsequent US Supreme Court decisions chipped away at post-Watergate federal laws until in my last reelection race, I had to raise more than $1 million to keep that same seat. Then, in 2010, the high court deemed political donations as “free speech.” Eight years later, my friend and First Congressional District successor, Suzanne Bonamici found it necessary to raise $939,392.52 for a reelection that initially cost me $150,000. House leaders of both parties now expect their members to spend 30 hours a week in “call centers”—buildings near the Capitol configured with small desks and telephones. Thirty hours! There, incumbents telephone total strangers to solicit campaign donations. I was long gone from the Congress at this point, but I distinctly remember having a goal of $3,500 a day in contributions. If I fell short and, say, raised $2,500, my next day’s goal would be $4,500. I’m told that nowadays, if you want to sit on a major committee, like the appropriations committee I served on, party leaders judge your bid in large part on how much in additional money you’ve raised for the party.

EB: What was the most important lesson you learned as a Congressman—something you might want to pass along to today’s aspiring leaders?

LA: Know what you believe and vote it. Nothing could be worse, Wayne Morse told me, than voting against your values but losing an election anyway.

EB: What did you miss the most after you left Washington?

LA: Well, it certainly wasn’t summer’s humidity, which at times felt like swimming in a bowl of boiling chicken broth. The capital, though, is a gathering spot for some of the most stimulating and knowledgeable people I ever encountered in one place. Hemingway called Paris “a movable feast,” but in DC, the diplomats, authors, statesmen, scientists, actors, scholars, and journalists I knew fed me copious servings of brain food all through my 18 years there. Where else could a fatherless boy from Central Oregon befriend the likes of George Plimpton; Dr. Spock; Mary McGrory; Hans Bethe, a Manhattan Project scientist; Elizabeth Drew; Vitaly Churkin, Russia’s UN ambassador, Christopher Reeve; Neil Sheehan; or Mark Shields?

EB: I was taken by your description of mentoring your son’s basketball team and also by the time he borrowed George H. W. Bush’s sneakers. Is it still the case that the Congressional gym lockers don’t have locks? I’m curious when that might have changed.

LA: (Laughter.) It’s a rare father who watches his son fill the shoes of the vice president of the United States. Members and former members who are current on their dues may keep their gym membership and locker. Yes, it is hard to believe this age of hyper-partisanship, the custom of leaving your locker unlocked endures. So does the understanding that you can borrow something you need so long as you return it. Kelly and I would use the gym on Saturdays to work on his jump shot and free throws when I was in town. One Saturday, Kelly absent-mindedly forgot his tennis shoes. Teenagers! We went from locker to locker to find a pair that fit. Finally, we reached the Veep’s locker. Size 10-and-a-half—perfect! What the hell, I thought, Bush is a former member and he knows the rules. Fortunately, Kelly replaced the shoes a few minutes before three congressmen, Bush, and his Secret Service detail barged through the gym door.

Here’s a side story. That morning, Kelly watched Bush and his friends play paddle ball when a dispute arose over one of the Veep’s shots that landed in front of my son, close to the line. After a lot of shouting, Bush swung around for an independent verdict. He yelled at Kelly, “Hey, kid! In or out?” Without hesitation, Kelly said, “Out.” Bush turned carmine red and, jumping so that he knees virtually hit his chin, he screamed, “Noooooo!!!” That’s when I knew my son had chops.

EB: I understand that your papers are part of the Oregon Historical Society collection. Did you keep a journal as a Congressional Representative? I was impressed with the level of detail in your book—and also with the terrific photos.

LA: I kept journals on and off throughout the years. Never consistently. But I was grateful to find so many of them stored in boxes. Some of them I had not opened in 30 years. We have kept hundreds of family photos. Political photos, too. Politics was a big part of our family’s life.

EB: Thanks for talking with us. Good luck with Catch and Release.

LA: Thanks. It was a three-year effort and I loved working with the talented team at the Oregon State University Press.