The Syntax and History of the Appalachian English Dialect, a guest post by Cole Barnes 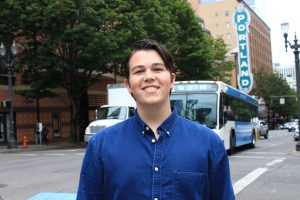 Cole Barnes is 2019 graduate of Southern Oregon University, with an English major, as well as minors in Psychology and Rhetoric and Reason. He has been fortunate to call many places throughout Oregon home, including Ashland for at least a few years now. He likes to write poetry, collect records, play guitar, travel, read books, listen to music, and take the occasional hike. Cole is excited to see what the future holds.

Appalachia is a mountainous region ranging from northern Alabama and Georgia, stretching northward as far as southern New York. The dialect native to this sub-region which spans several southern and eastern states is referred to as Appalachian English. This “mountain talk” has been commonly associated with Inland South, Midland, and even Ozark dialects. However, it is a unique dialect with its own lexicon and syntax, and has gained a certain level of legitimacy and recognition in recent years regardless of the stereotypes that have historically affected the tongue’s reputation. Primarily, this analysis will consider how Appalachian English operates, and the differences in usage that exist between this speech and other forms of English. Research on the historical origins and evolution of Appalachian syntactical patterns will also be included. This dialect shares many similarities with its standardized counterpart and contains many distinctive linguistic qualities worth investigating.

The heartland of the Appalachian region is typically classified by states such as West Virginia, Tennessee, Virginia, Kentucky, and the Carolinas. From around 1730 to the 1830’s, this region became gradually populated by European settlers through a “widening corridor from central Pennsylvania’s Cumberland Valley westward to Pittsburgh and the Ohio Valley and southwestward into Virginia” (Montgomery 26). A sizable portion of the current inhabitants of these regions hold claim to English, Scottish, Irish, or even German ancestry, as these were some of the first non-indigenous inhabitants in this area. Some of the first colonizers of the Appalachian region included land speculators, many of which were soldiers from the Revolutionary War. Others included families who had pushed westward across the Blue Ridge Mountains, many of which were immigrants (Hall 10). Generations of Appalachian settlers had begun to spread across these mountains; most white settlements had been fully established by 1810 (10).

Appalachian English has been misleadingly considered to be a dialect by which linguistic development is entirely reliant upon geography and regional features (Montgomery 27). Several hypotheses attempt to explain the prevalence of the Appalachian dialect, such as the notion that settlers of this area brought Elizabethan, Scottish, and Irish English with them to the communities of Appalachia, which led to the emergence of a unique dialect significantly influenced by the speech of the British Isles (32-33). Some claim that Appalachian speech is a uniform dialect preserved in time because of a purported geographic and cultural isolation, but such a separation of localities “should logically produce increasing differences in speech rather than uniformity” (28). Appalachian English is more conservative than it is isolated, and still changes just like any other dialect or language. Even though the original settlers strongly influenced the evolution of Appalachian English, this variant developed independently as a distinct dialect, and is not simply a remnant or a hold-over from a different time. The following sections will attempt to highlight the dynamic structure of this “mountain talk” by outlining a few of the unique usages and syntactical features of this dialect.

For speakers of Appalachian English, nouns of measure and weight typically lack an -s when used to mark plurality, precede a number, or express quantity. For instance, “They had to drive twenty mile to work,” or “I am nearly twelve year older than my sister.” Many of the mass nouns that do not require a plural -s are construed as count nouns: “Gravels are hard on the feet,” or “A beef is bigger than a sheep.” Count nouns can also be understood as mass nouns. Nouns that end in an s sound may also be taken for a plural meaning: “Give me a slice of them cheese,” or “A fox is more of a dog specie.” Plural animal names either omit or add an -s ending, contrary to the customary usage in standard English. This can be demonstrated in the following examples: “There are plenty bobcat here” or “I caught a few trouts today.” Double plurals may also be employed, as in folkses or oxen (Grammar and Syntax).

Pronouns are also an area of grammatical complexity in Appalachian speech. The commonly used nominative singular pronouns include I, me, you, ye, he, him, she, her, hit, and it. We, we’uns, you, you’un, you’all, y’all, you all, ye, and they are nominative plural pronouns. You, ye, her, him, hit, and it are used as objective singular pronouns. Us, you, you’uns, you’uns all, y’all, you all, ye, and them are all objective plural pronouns (Grammar and Syntax).

Adverbial phrases can be moved to the front of a sentence as in the following instances: “We’d all the time get in fights,” or “We’s all the way talkin’.” Adverbs of frequency can also be placed within or outside of a verb phrase: “That was the brightest light that ever I seen.” The adverb ever may be combined with pronoun forms like what. In the place of whatever, Appalachian English speakers often construct phrases that employ everwhat. This extends to cases in which speakers also say everwho in the place of whoever. Ever is also widely used as an abbreviation for every: “And ever time …” (Wolfram 99). Many of the adverbs that utilize -ly endings are left as their root form: “I’m frightful scared of spiders” (105).

These speakers also engage in the process of “a-verb-ing.” For example, “You just look at him and he starts a-bustin’ out laughing at you” (71). While speakers of other varieties of American English do this as well, it is a form most frequent in Appalachian English. The most common cases of this usage “occur with progressives, which includes past tense, non-past tense, and be + ing forms where the tense is found elsewhere in the main verb phrase” (70).

This dialect also employs the double modal. Appalachian constructions may have close “translations,” but in some cases, there are no real equivalents. “Might be able to” may be substituted with “might could,” but with some such as “might should,” there is no real modal translation that would sustain the same semantic meaning. The following is an example of a double modal in use: “I might could make up one, but I don’t know” (90). Other widely used double modals such as liketa, are most accurately translated as “almost” or “nearly.” Another common double modal, supposeta, is closely related to “supposed to” (92).

The perfective done is not widely used by speakers currently, as it is very much a stigmatized feature. It is more commonly employed among middle-aged and elderly speakers of the dialect. This construction deals with aspect, which can either be neutral, progressive, or perfect. Perfect aspect refers to a situation or action that has already occurred, and the perfective done signals completeness (Hazen, et al. 59). The following examples display how speakers familiar with this dialect may use this feature: “I done lost my wallet,” or “she done went to the store.”

Another relatively stigmatized feature is the for-to infinitive, which typically only appears in speakers born before 1947. This infinitive uses for and to in coordination with unconjugated verbs. This could be used in two ways: “Because the teacher was glad for us to come in playing music now and then” (57), or “I had to pick up chestnuts for to buy what we had to wear” (60).

Demonstrative determiners modify nouns and give information about quantity or proximity. For instance, “you may have these or those” infers distance between the speaker and the aforementioned objects. In Appalachian English, speakers utilize them as a demonstrative: “We bought them shoes” (60-61). This is a usage characteristic of the Appalachian dialect, but is also widely used among other English speakers, despite its perceived informality.

The leveled was is also a key feature of Appalachian usage. While more common among older speakers, it is a widely distributed characteristic. This leveled was essentially replaces were: “They was like any other parents” (62). Leveling verbs like was into single forms helps to resolve the asymmetrical patterns of subject-verb agreement.

The grammatical features of Appalachian English demonstrate how this dialect is not arbitrary. Speakers of this dialect have an intuitive understanding of the syntactic structures of their spoken language. Regardless of the negative perceptions that some individuals hold of “mountain talk,” being a speaker of this dialect has nothing to do with a person’s intelligence. Being able to use the various grammatical rules of this dialect appears most of all to be a marker of linguistic competence. This speech has always been evolving, never existing as a static tongue. It has changed and adapted too much and too often to have been preserved in time by any type of geographic or cultural isolation. Appalachian English is not an indicator of laziness or a lack of education, but rather of a rich cultural history, tradition, and identity. The very nature of language is ever-changing and fluid; no language or dialect could ever become an artifact unless it stopped being spoken. While major grammatical differences exist between standard English and the Appalachian dialect, both share a common historical origin. Logical and systematic structural features help to comprise every language. This speech is no exception, surviving for hundreds of years in the face of staunch opposition and radical change. Appalachian English is a legitimate and valid dialect that is being further developed and refined every day that it is spoken.