An Interview with Octavio Solis 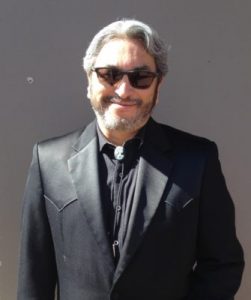 Octavio Solis is a playwright and director. His works include Mother Road, Quixote Nuevo, Hole in the Sky, Alicia’s Miracle, Se Llama Cristina, John Steinbeck’s The Pastures of Heaven, The 7 Visions of Encarnación, El Paso Blue, Santos & Santos, and La Posada Mágica. His plays have been mounted in many theaters across the United States including Mark Taper Forum, Yale Repertory Theatre, the Oregon Shakespeare Festival, the Denver Center for the Performing Arts, the Dallas Theater Center, the Magic Theatre, Latino Chicago Theatre Company, the New York Summer Play Festival, and El Teatro Campesino. Solis has been the recipient of numerous awards: an NEA 1995-97 Playwriting Fellowship, the National Latino Playwriting Award for 2003, the United States Artists Fellowship for 2011, and the 2014 Pen Center USA Award for Drama. Solis is a Thornton Wilder Fellow for the MacDowell Colony, New Dramatists alum and member of the Dramatists Guild. He is working on commissions for the Arena Stage, SF Playhouse and South Coast Repertory Theatre. Solis lives on a small farm in Southern Oregon.

Alma Rosa Alvarez is a professor of English at Southern Oregon University where she has taught for twenty two years. Her teaching focus is on ethnic literatures in the U.S.

Alma Rosa Alvarez: You have a considerable production of plays: over twenty. You are generally categorized as a Latino playwright, yet in 2018, your collection of short stories, Retablos: Stories from a Life Lived Along the Border was published by City Lights Books. Congratulations! Is there a different creative process you have to engage in to write short fiction than the process you engage in when you write plays?

Octavio Solis: The process I employed was very different in writing Retablos. There was no emphasis on dialogue; I made an effort to eschew dialogue in favor of descriptive action. I could allow myself long imagistic stretches and major shifts in time and place, foreshortening these in order to tell the story in a concise and lyric manner. Some of the “retablos” were hardly more than a character sketch, but that felt right at times. A play is very different, leaning more on dramatic action than on descriptive passages.

But I also used an approach that served me well in theatre. I determined that these stories had to be written in the first-person pronoun and in the present tense, because then I could think of them as extended monologues and the present tense allowed the stories to be relived in that zone that falls between memory and dream. And almost all of my “retablos” eventually landed on a single event where all the elements gravitated toward. That focal event felt like a scene in a play or movie, even if it lasted no more than a few paragraphs.

ARA: In your introduction to Retablos, you tell the reader that retablos are “… a kind of flash-fiction account of an electrifying life-altering event.” Can you explain what other qualities of the retablo you are connecting to your fiction?

OS: The principal feature of the retablos I have seen and collected is the picture, the diorama, if you will, of someone’s earthly crisis, at which the divine is also present in the figure of a particular saint or Holy Virgin. This simple crudely drawn and painted image is wrought with drama, depicting a moment of powerful tension, pain, and transcendence. I took my cues from these images, and determined to use them as the motif for the moments in my life that defined me. So I crafted my personal stories so they would feel as terse and vivid and magical as these painted images on tin.

ARA: Your short story, “The Mexican I Needed” really resonated with me. My parents also had Herb Alpert’s Whipped Cream and Other Delights. You close that story with “One day, thirty years later, someone tells me Herb Alpert is actually of Ukrainian and Romanian extraction…To me, he’ll always be the Mexican I needed for dreaming.” Can you speak to the way you are conceptualizing Mexican identity in this story? Can you speak to how you conceptualize Mexican identity in general?

OS: For someone born in the US but whose parents hail from Mexico, there is always a disconnect that happens between the present culture and the one before. Sometimes, it is a flimsy synapse, and sometimes the disconnect can be a chasm. My mother and grandmother had a record collection that ranged wildly from Trio Los Panchos and Agustin Lara to Petula Clark and Diana Ross and the Supremes, an amalgam of distinctly Mexican and wholly American (yes, we thought Petula was American) musical styles and genres. Landing right in the middle of these was Herb Alpert, who played his horn and dressed like he was a pop star from Mexico. He appropriated my parents’ culture and adopted it as his own, and made a career for himself using their music. I didn’t know this as a kid growing up in El Paso, where already the cultures were so thoroughly blended and Chicano bands were playing their own Latin-infused versions of Beatles tunes and Santana was about to appear in Woodstock. I saw Alpert’s dark skin, his charro– style outfits and heard that distinctly Latin sound and that said to me “I am Mexico.” So I appropriated him in turn, and now that he claims his Jewishness and Eastern European roots; I claim them as my own too. Because there are Mexicans, I have since learned, who are also Jewish of Eastern European extraction. His music awoke that part of me that ached for Mexico in ways that even more authentic music could not because, generally speaking, even as the music had that Latin beat and summoned images of rural Mexico, the titles and credits on the album covers were all in English. These albums were the bridge between my Dad’s Mexico and my America.

Of course, I gave them up once I found more genuine Mexican music, but there was something special that lingered in my mind about these silly albums, because they made me grasp a clearer sense of my self-image as someone who straddles two cultures without even thinking about it.

ARA: In the Introduction of Retablos you tell your reader that the stories have a basis in memory. You also mention, though, the various ways those memories necessarily get fictionalized when they are set in written form. How important is that overlay of fiction for you, particularly in stories that involve your family members? I am thinking about “Wild Kingdom,” for example, that begins with “He fired his gun at us but not ’cause he wants us dead. How could he? He is our dad.”

OS: In reading a lot of fiction over the years, I’ve learned that much of it comes from actual experience, but as a rule, writers don’t make that connection for their readers. I flatly declare that they are based on moments in my life, and I add that I made things up when memory failed. Obligation to story is paramount for me. But what I learned, however, is that whatever I made up in the service of these stories, it still had to be the truth. Wild Kingdom is a real memory; the only thing I made up is what the little boy wishes he could tell the cop about his dad. But it’s the truth. And yet once I wrote that down, it all became fiction. Because I am telling a skewed story about a real event, purposefully or accidentally misremembered, from a single point of view. Mine.

ARA: The Chicano Movement was heavily influenced by the Mexican Revolution idea that “the land belongs to those that work it.” Early Chicano writers used this idea to create a sense of belonging for their exploited farm worker characters. If they work land in the United States, then they are of the United States, despite discrimination and marginalization. Did any of these ideas on land influence you as you wrote your play Mother Road?

OS: Yes, they do. The idea of belonging cannot be merely expressed through a piece of paper, a document. It is expressed through labor and commitment to the land. Citizenship is an ideal, or should be, that is manifested in real effort to build community and contribute to the culture we share. American citizenship can’t be defined by what it’s not and who’s not, but by the positive values that transcend borders and race and religion and language. I refer to the great writer Cherrie Moraga who says that we must disabuse ourselves of this national amnesia and wake up to the fact that “we”, ie. the descendants of our native forbears, can’t be aliens in a land we have always lived on. For millennia. We’re a migratory species like the buffalo and the butterfly and the birds, but we have always been here. So easy, once we consider this, to rise from picker to patron, from campesino to captain. This will to be what we were fully born to be is what defines American to me.