An Interview with Michael Niemann, author of No Right Way 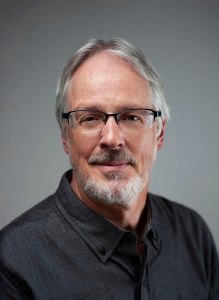 Michael Niemann grew up in a small town in western Germany before moving to the United States. He received a PhD in International Studies from the University of Denver.

For over three decades, Michael has been a teacher of international studies focusing on the ways in which ordinary people’s lives and global processes intersect. In addition to teaching and academic writing, Michael has pursued these interests through fiction writing in his series of thrillers featuring UN investigator Valentin Vermeulen, published by Coffeetown Press.

Legitimate Business and Illicit Trade were published in 2017. Illegal Holdings came out in March 2018. The fourth Vermeulen thriller No Right Way has just been released. His short stories have appeared in Vengeance, the 2012 Mystery Writers of America anthology edited by Lee Child and as Kindle singles.

Ed Battistella: I really enjoyed reading No Right Way. Can you tell folks a bit about Valentin Vermeulen’s latest adventure?

Michael Niemann: People had been fleeing the Syrian civil war that started in 2011 all along, but after the rise of ISIS (or Daesh as it’s called in Arabic), the fighting became so widespread that the flow turned into tidal wave in 2015. That wave of refugees caught the world unawares. The UN High Commissioner for Refugees (UNHCR) and the Turkish government had to scramble to deliver even a modicum of aid. They appealed for support from around the world, both in financial form and in asking places to resettle the refugees. In such desperate situation, money is often spend quickly to address the mounting needs. That means the usual safeguards, like competitive bids for services, etc., are often ignored because the need is to great. Unfortunately, human suffering and the efforts to ameliorate it also attracts all kinds of crooks hoping to cash in. So that’s the basic premise of the novel. Vermeulen is there to make sure no fraud is happening, but, of course, he finds it.

EB: How did you come up with or find the idea of the cash card and van rental scams? Are these based in real criminal activity?

MN: The smuggling of gasoline from ISIS controlled refineries to Turkey was know at the time. That’s how ISIS financed its weapons. The normal smuggling MO was shuttling jerry cans, stacked in vans across the border between Turkey and Syria. That border was rather porous, so it was easy to drive across. After NATO and others complained about the overt smuggling, ISIS even buried pipes under the border so that the vans didn’t have to leave Turkey. It didn’t take much research to tell that story.

The cash card scam was a little more complex. One of the developments in the aid sector is to move away from delivering food to refugee camps and use pre-paid cash or ATM cards instead. The logic is sound, it give refugees agency in choosing what to eat, rather than having to eat, say, surplus cheese from the EU or the US. It also supports local economies. Dumping a lot of free food in an area causes havoc with the local economy. Local shops and farmers are put out of business. So in most cases, giving refugees cash cards is a really good strategy. That doesn’t work well in very poor countries that don’t have the technical infrastructure for cashless payments, but Turkey has it.

However, issuing the cards involves multiple contractors and banks, and I asked myself, “What if one of those contractors was a front for the mafia?” Most crime writers ask themselves such “what if” questions to come up with a plot. 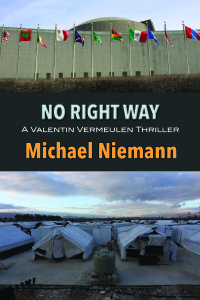 EB: The title is a departure for you—from the Legitimate Business, Illicit Trade, Illegal Holdings group. I understand that this one is based on a Turkish proverb: there’s no right way to do a wrong thing. Can you elaborate?

MN: I’m very bad with titles. I avoid finding one as long as I can. I usually get to the end of the novel and still don’t have a title. I then comb the manuscript for a pithy phrase that I could use. Yes, the first three novels had two-word titles. But that was getting a little worn. Since I had an old mafia boss, I did research on Turkish proverbs. That was my strategy to make him a little more relatable. He did use the one you cite as he complains about how his niece has run an operation. I just thought the first part had a good ring to it.

EB: What’s the most difficult aspect of writing a thriller? Pace, characterization, plot? I was really impressed with the way No Right Way kept things moving.

MN: Well, the pat answer is, “All of the above.” I think pace is important. To paraphrase Ian Fleming, you got to get the reader to turn the page. Pace is one way to achieve that. But pace alone gets boring. There was a funny cartoon in the paper where the editor tells the author (a dog), “Sure, it’s exciting, but you can’t have a chase scene on every page.”

The plot has to be plausible. I think that’s key. The reader has to believe that it could have happened. That’s where a lot of my research happens. One of the side effects has been that I know a lot about money laundering.

In the end, though, it’s the characters that make the reader care. They have to be as three dimensional as possible. I’ve gotten better at that. A good rule of thumb is Kurt Vonnegut’s maxim that every character has to want something, “even if it’s only a glass of water.”

EB: Vermeulen is a wonderful character. Tough and competent, but no James Bond or Jack Reacher. You’ve got some interesting female characters in the novel—aside from, I thought and of course Vermeulen’s daughter. Is writing strong female characters something you’ve worked on? I notice this in your last Vermeulen book as well.

MN: Yes, I’ve consciously worked on that. There’s a bad tradition in crime fiction that relegates women to be either the “dead girl,” the prostitute, rough but with a heart of gold, the mousy secretary who secretly loves the hero, and so on. I couldn’t write such characters. The women in Illegal Holdings, for example, were inspired by all the women who ran human rights organizations in southern Africa. I met them doing academic research in the region. Vermeulen’s daughter (about which we learn a lot more in the fifth novel) is still young but very competent in her job at a logistics company. She’s always part of Vermeulen’s team, as is his partner/lover Tessa. In No Right Way I chose to create a female character who’s just as strong willed, but on the other side of the law. Yesim Yaser wants to represent a new generation of leadership in the Turkish mafia. It was fun creating her.

EB: I was intrigued by the Inspector Demirel character. Can you talk more about him?

MN: He began as an afterthought, I needed a police officer of higher rank. Demirel just emerged without a lot of planning. One of the problems of setting stories in foreign places is the language barrier. Vermeulen speaks Dutch, French, English and bits of other western European languages. He doesn’t speak Turkish. To overcome this and avoid the tedious translating, I had Demirel study at Boston University. To make him more three-dimensional I also gave him a Kurdish background which makes him somewhat of an outsider. At the same time, he resents outsider know-it-alls. So he’s got a bit of national pride that is tempered by his one ambivalent status. He and Vermeulen spend a great night drinking Raki.

EB: I know you are a fan of noir. Would you consider your Vermeulen series noir?

MN: No, it’s not noir. If we use Tim Wohlforth’s definition of noir—things start out bad and only get worse—my novels don’t qualify. For one, Vermeulen isn’t some tragic character. Yes, he’s had his ups and downs, but he doesn’t drown his sorrows in whisky. My endings also aren’t worse than where the novel started. They aren’t necessarily happy endings. I think I distinguish between personal and systemic endings. On the personal level issues do get resolved, but on the system level they aren’t necessarily. So that might me more gris then noir.

EB: What else are you working on? A fifth Vermeulen thriller, I hope.

MN: Yes, I’ve finished the manuscript for the fifth Vermeulen thriller. For once, it doesn’t involve the UN or far away places. Vermeulen is called back to Antwerp where he learns that the past indeed isn’t dead and not past either. The story weaves together two mysteries, one in 2002 and one in the present.

My publisher didn’t like some of the things I’d tried to do, but fixing them turned out easier than I thought at first. I’m about to send it off again and hope that I’ve addressed those concerns.

EB: Thanks for talking with me. Good luck with the book.