Clive Rosengren and Sharon Dean Interview Each Other 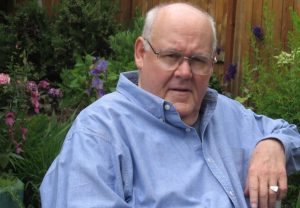 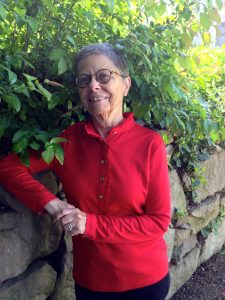 Sharon Dean grew up in Chelmsford, Massachusetts, received a PhD from the University of New Hampshire, taught at Rivier University in Nashua, New Hampshire. Having written four academic books as a professor, she has reinventing herself as a writer of mystery novels. Her thought provoking whodunits featuring literature professor Susan Warner include Tour de Trace, Death of the Keynote Speaker, and Cemetery Wine. Her most recent book is Leaving Freedom, a tale of a writer’s spiritual and personal journey from Massachusetts to Florida to Oregon.

Clive and Sharon are members of a writing group in Ashland. Literary Ashland asked them to interrogate each other about their work and writing process. Enjoy this innovative double interview.

Sharon Dean: Clive, how did your background as an actor benefit your writing? Were there any habits you had to overcome?

Clive Rosengren: One of the characteristics of the novels I’ve tried to accomplish is to have Eddie with one foot in the PI business and the other foot in the Film/TV business. So having spent 18 years in Hollywood in and around lots of sets gives me the opportunity to rely on personal experience. Habits? Trying to keep from being too cynical about the whole Hollywood circus.

Sharon: You situate Eddie so well in a Hollywood you know. Have you ever thought of bringing him into rural South Dakota where you grew up? What kind of challenge would that present?

Clive: As a California licensed private investigator, Eddie Collins wouldn’t be able to ply his trade in another state, but would have to be considered an amateur sleuth. I don’t see him going that route, at least for now. And except for some cousins, I don’t really have ties to South Dakota anymore. However, back in October, the recovering actor in me fell off the wagon and worked on a small, independent film project up at Hyatt Lake in the mountains above Ashland. While there, the germ of an idea popped into my head that would find Eddie—possibly as a favor to a director friend?—participating in a small film, during which something happens that would lure him into the need for a PI, and take him out of the confines of Los Angeles. Stay tuned.

Sharon: What’s the easiest part of writing for you? The hardest? 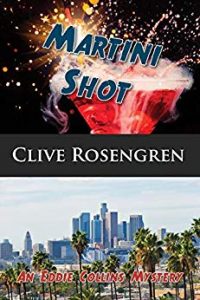 Sharon: What motivates you to keep writing in an era when so many good novels like yours don’t get the notice they deserve?

Clive: Well, first of all, thank you for the generous comment. Since the creative urge of my acting career has become almost a rumor, I’ve found it necessary and enjoyable to fulfill it with the writing. I didn’t venture into this arena with the intent of making a lot of money or becoming a best seller, but what keeps me motivated is a character I like (and am still learning more about) that I can put into the entertainment business which I’ve essentially left behind.

Clive Rosengren: Sharon, your first three novels dabbled in crime and mayhem, so what made you want to stray from that milieu in your fourth book?

Sharon Dean: Leaving Freedom bridges the gap from my academic career to my foray into fiction. I wanted to write something like it before I got caught up in my Susan Warner mysteries. My scholarship involved writer Constance Fenimore Woolson, who traveled from Ohio to Florida to Venice as she became one of the leading novelists of the nineteenth century. She had a fraught relationship with her sister and was a caregiver to her mother.  I wanted to use these relationships to create a novel. When I started, I thought I might have my character Connie to go to Venice and jump out a window onto the pavement by a canal as Woolson did. But this felt too extreme. So I decided to bring my character to Oregon, especially to Ashland with a side trip to Rajneeshpuram. It was time for me to write about places beyond New England. Woolson, by the way, also generated my idea for Death of the Keynote Speaker.

Clive: In the book you’re working on now, you’ve gotten back on the path of murder and mayhem. Your protagonist in this book is a librarian. Any thoughts of embarking on another series with this character?

Sharon: Yes. Three, possibly four, books in this series. As a librarian my character, Deborah Strong, can move around. She’s in New Hampshire right now and will have to be in places that I know well. I’m thinking some kind of library retreat, still in New Hampshire–a locked room setting similar to what I did in Death of the Keynote Speaker; New Orleans where her friend Rachel lives and which I know from when my son lived there; Ashland, which I know better and better every day. A series will evolve as it will. 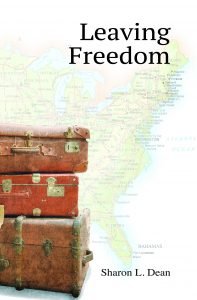 Clive: Do you do a detailed background on your characters? Or do you pattern them after people you have known?

Sharon: People equate me with my character Susan Warner because she’s a retired English professor. They equate her daughter, Erika, with my daughter. The first name initials don’t help. They share some of our characteristics but they are not models of us. I’m finding that I need an image of a character as a starting point and I often find that image in someone I know or have seen. For my new protagonist, Deborah Strong, I found a model in a candid photo in my daughter’s year book. Right look, right era for the backstory of the novel. There the resemblance stops. The characters take on lives of their own as my novels develop.

Sharon: Our writer’s group is exactly what I need to improve my writing. The twenty page submissions every two weeks helps me stay disciplined. We all write different kinds of mysteries: noir, PI, cozy, international thriller. Reading and responding to different styles stretches us. Leaving Freedom branched away from what is technically a mystery genre, and I appreciated how everyone stuck with me through what is the longest novel I’ve written. The group works because we’re honest with each other. I’m pretty tough-skinned, so I always appreciate critiques. A group where people are afraid to criticize or can’t accept criticism would be disastrous for me.

Ed Battistella: Thanks to both of you!