Posted on December 4, 2017 by Ed Battistella 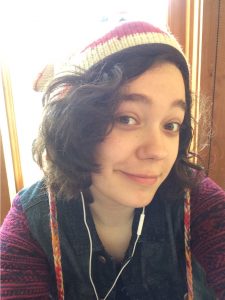 Allegra Lance is a writer and editor from the pacific northwest who regularly moonlights as a writing teacher and burrito connoisseur. In her free time, Allegra practices circus arts and dabbles in game design. She can be contacted by chanting “Roll for perception” three times into a venti iced coffee between the hours of 1 pm and 3 am. She graduated from Southern Oregon University 2017 with degrees in English and Writing.

EB: What is your graduate experience like so far?

AL: It’s a little strange! I moved home after graduation and immediately started a fulltime job as a teacher which I did all summer, and now I’m exploring options for grad school, looking at programs for creative writing and publishing. When I finished teaching I realized I hadn’t really sat down and just done nothing for two or three years so I took three weeks to eat ice cream and sleep. Now I’m taking some lower level linguistics classes to sort of see if I’m interested in that as a career option and sort of supplementing my editing skills, and it’s weird because I feel like I went a little backwards! My classes are full of freshmen and my final papers only need to be three pages long! I’m also at a much larger school, and that is a bit of a culture shock.

EB: What courses are you taking and what sorts of things were you reading?

AL: I’m currently taking a class on the structure of English, so grammar and word classes and all that fun stuff, and then I started taking ASL in case I continue in the program. It’s very different from what I’m used to, which I’m finding is nice. Taking two classes instead of five is also pretty great.

We don’t read much but very dense textbooks, but I’ve been reading in my spare time things like Big Magic and Swimming Lessons, so some non-fiction and some fiction and all just to get back into reading for fun and working towards being a better writer. Having time to read whatever I want again is fantastic.

EB: What has been the most fun so far?

AL: I think, really, it was teaching. There were definitely hard days and it’s the most difficult job I’ve ever had to do but an overwhelming majority of the time it was a blast. I think, even though it was insanely difficult and exhausting, having something to do that I really cared about and being able to make a path for myself and make a living that way was extremely gratifying. Also I got flowers from one of my students and it was the sweetest thing ever.

EB: What has been the weirdest?

AL: So I grew up in Portland, and now I’ve moved back to Portland, and there are so many things that I had no idea existed before or that came into being the four years I was away and it feels like I’ve stepped into an alternate universe where everything is just shifted six inches to the left, or, for example where the Freddie’s is two stories tall and has a tattoo parlor in the basement. It’s nice, though, because so many of the things I’m discovering are just things I never cared about before because I was young and it just didn’t matter to me yet, so being able to sort of rediscover the city I grew up in is neat.

AL: Right now I’m looking for some kind of job or internship in publishing and then within the next year I’ll be applying for grad school and hopefully starting my master’s. I’ve also kept working on some poetry, some short stories, a novel or two, so we’ll see where those go.

EB: Any advice for students considering going on for more school?

AL: Definitely make sure that you look for opportunities outside of school. I originally was planning on going straight into grad school, but now I’ve realized there are a lot of things, like internships or partnerships with people who are already out there doing what I want to do, that are really good resources and experiences. Working and doing something other than school has helped me figure out where I am in my life now and what I want to do going forward, since before now the goal had just been to graduate! Also, just be open to possibilities, even if you have a really specific idea of what you want to do. Taking an opportunity, even if it isn’t exactly what you had in mind, can still teach you a lot and open up other possibilities that you might not have even considered before. Even if you still decide to do exactly what you wanted at first, having the extra experience and that certainty can do wonders for your confidence.

EB: Thanks for talking with us!

AL: Thanks for the questions!

Edwin Battistella’s latest book Dangerous Crooked Scoundrels was released by Oxford University Press in March of 2020.
View all posts by Ed Battistella →
This entry was posted in Grad School, Ideas and Opinions. Bookmark the permalink.