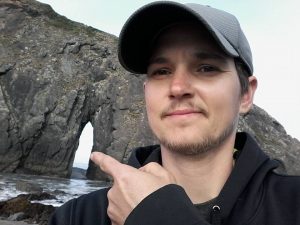 Eric Worthey is a Graduate student and First-Year-Writing Instructor at Eastern Michigan University. He was a Ronald E. McNair scholar at Southern Oregon University, graduating in 2015.

EB: How has your experience so far shaped your career goals?

EW: Recently, I received the advice that between Thanksgiving and Christmas may not be the best time to reconsider career goals. One of the reasons I chose EMU was because, like SOU, it originally opened as a Normal school. One way the University retains this heritage is through the motto ‘Education First.’ Combined with the opportunity to teach WRTG 120 and 121 for the First Year Writing Program, I also assist professors in the children’s literature lecture halls. These two positions create opportunities for me to experience diverse teaching environments and work with professors who maintain unique pedagogical approaches. EMU’s student population is much larger than SOU’s, so I have learned that I prefer the teaching and learning environments created with smaller faculty to student ratios. I still aspire to teach writing and literature, as well as produce some writing and literature myself, but I am not sure in what capacity or location these goals will manifest. I have looked into a few Ph.D. programs, but after spending the past eight years devoted to my education I think I would like to take at least a year or two off from being a student. I have learned that a big part of being a graduate student is not knowing for certain how things will unfold or where research will take you, so being open to future possibilities and job opportunities is an important way to reduce the stress associated with being attached to outcomes.

EB: What courses are you taking and what sorts of things were you reading?

EW: This semester, I branched out beyond the children’s literature discipline and signed up for an introductory course on written communication and a teaching of Shakespeare literature course. As part of my graduate assistantship benefits I receive eighteen tuition credits per year, so I am utilizing the extra six credits that I do not need to graduate to meet the qualifications for a post-graduation job opportunity. To have a chance at this job, in addition to a master’s degree in children’s literature and two years’ experience teaching first year writing, I also need at least twelve credits in literature, writing, or English.

In the written communication course, we are mostly reading academic articles which illuminate the history of the field and help us gain a sense of where we would position ourselves academically and professionally since it encompasses many different majors, ranging from technical communication to rhetorics and composition studies.

In the Shakespeare class we are reading an average of one play per week except for a few we discussed during two class periods, including A Midsummer Night’s Dream, Measure for Measure, All’s Well that Ends Well, Hamlet, Othello, King Lear, and The Tempest. I never knew that there was such a wide spectrum of gender performance and ambivalence toward gender in Shakespeare’s works until this semester. I also came to realize that queer readings of these plays are not very popular, but that they do exist.

I am also taking a multicultural children’s literature course that is cross-referenced as a teaching course, so we are reading a broad range of classic and contemporary books and discussing films that represent numerous types of diversities that students may experience or encounter, including age, race, religion, ability, gender, sexuality, as well geographic location: Snowy Day, Lon Po Po, King & King, American Born Chinese, The Hate You Give, The Perks of Being a Wallflower, Brown Girl Dreaming, The Book Thief, George, The Hunger Games, and films such as Disney’s Inside Out and Pixar’s Up. We examine these multicultural texts in terms of their literary, aesthetic, ideological, political contexts. This class is mostly discussion based, so it helps to gain insights not only from the professor but also from my peers who are also teachers or aspiring to teach.

EB: You are also teaching. How do you enjoy that?

EW: I enjoy working with the students. The relationships I develop with my writing students differ than the ones I have with the students in the large lecture hall, but I find them both rewarding in their own ways. All writing is personal, so when teaching introductory writing I like having the freedom to create a community-based classroom that operates like a writing workshop, rather than a traditional lecture-style course. I think that the lecture-style works for larger class sizes. However, when delivering lectures in this environment, I find myself assigning class activities to encourage students to participate in small group discussions. I like being able to try different pedagogical approaches and apply this knowledge to the creation of my teaching philosophy statement.

EB: What is the most rewarding part of your graduate program?

EW: The opportunity to teach and assist in teaching undergraduate students provides one of the most rewarding experiences of being a part of any graduate program in EMU’s Department of English Language and Literatures. This invaluable experience not only covers the cost of tuition, but it also offers a stipend in exchange for twenty hours of work per week during the fall and winter semesters. It is also rewarding to have three months off during the summer, but it is a little odd to have spring break amidst a Michigan winter: February.

EB: What’s been your academic focus? Has it changed at all since you began?

EW: Focus. Focus. Focus. That was Dr. Alvarez’s advice before booting me off to grad school. Initially, I had wanted to continue my research of mythology and religion representations in contemporary young adult literature. However, during my first semester several events on campus inspired me to focus my independent study on learning about the dimensions of racism. I quickly realized that I had not diverged from my original focus, but I was still attempting to answer the research question that I had first proposed as an undergraduate in a world religions class: Why has the bible been used to usurp the power of women, children, people of color, and gender and sexuality diverse people for the past two thousand years when Jesus’ and Paul’s words create oppositions? The professor’s response to my proposal to pursue this research question for my final paper will always be a cornerstone moment for me in my educational path. Also, I will never forget that it was in this class I first heard the words mythology, non-duality, and Joseph Campbell, and learning their meanings helped shape my academic focus. I did not understand what the professor meant when he identified his religious/spiritual beliefs as being ‘non-dual,’ but I do now and am trying to find ways to encourage others to consider this worldview. Two years hardly feels like enough time to try to focus on one thing that I would like to specialize in for the rest of my academic career.

Last semester, an assignment for one of my children’s literature classes involved creating something. It could be anything if we developed a rationale for the creation. I was reluctant at first, but I took one of my old University Seminar style guides and used its pages to create a postmodern version of the Grimm’s animal fable “The Bremen Town Musicians.” I incorporated drawings and collage materials to draw attention to how the contemporary American political climate seems a lot like the early days of Nazis Germany. I decided instead of writing a traditional thesis, I was going to finally create a children’s book that incorporated mythological elements and symbolism to break down binary perceptions, going back to much of the research I conducted as a McNair Scholar.

It is funny how I am still researching the same question, but at the same time I am learning new ways to look at the trouble with duality. I finally discovered that one of the difficulties of this arises because the place where oppositional forces break down remains indescribable by our languages. Thus, I am back to square one and trying to draw pictures that are highly symbolic and open to interpretation to create a graphic novel that challenges binary perceptions and socially constructed identity markers.

EB: Any advice for students considering going on for more school?

EW: If I were to offer advice to prospective graduate students, I would draw their attention to the amount of time, or lack thereof, that is required to succeed in graduate school. The sheer volume of the reading lists is enough to overwhelm the most avid readers, especially if they desire to have a social existence (not really a reality for a graduate student). Also, don’t invest your own money. Find programs that offer graduate assistantships or scholarships that include the tuition and stipend to cover living costs while you work on your degree. There are plenty of opportunities, but keep in mind that the applications deadlines usually come earlier for these than the program of study applications. Don’t rack up a lot of student debt going to graduate school because another degree does not necessarily translate into post-graduation job opportunities.

Before applying to a graduate program, conduct preliminary research about the availability of jobs on the market by joining your discipline’s organizations, listservs, or by reading or subscribing to higher education publications. Also, when seeking a potential program and a faculty member to work with on major academic projects it helps to discover which scholars or professionals are already working in that area. What institution are they from? What is their academic discipline? What organization sponsored the journal their article appears in? Was there a co-author, an editor(s), or an academic advisor? This will help gain a sense of potential institutions and/or faculty that will support your research goals.

EW: I began my postsecondary educational career when my life hinged on the space between my twenties and thirties. I lingered there and wondered what had I done with my life. Nearly eight years later, and following two degrees, I currently anticipate graduating with a Master’s degree in Children’s Literature in April, so I have began reflecting about my experiences and future possibilities. I do plan to take a year or two off before pursuing a Ph.D. program because I would like to gain some teaching experience before I hit the forty mark. While on the Oregon coast this past summer, I spoke with the dean of a community college about a potential post-graduation job opportunity. I plan to apply for this position, as well as for teaching positions at few other community colleges along the Northern California and/or the Oregon coast, and see what happens. Additionally, since I am completing the first issue of a graphic novel for my master’s thesis project, I hope to submit a copy of it along with a book proposal, like the one I created when I participated in your history of publishing course, in hopes of continuing to develop the story line into a middle-grade reader series.

EW: It was my pleasure, and thank you!

Edwin Battistella’s latest book Dangerous Crooked Scoundrels was released by Oxford University Press in March of 2020.
View all posts by Ed Battistella →
This entry was posted in Grad School, Interviews. Bookmark the permalink.