An Interview with John McWhorter, author of Talking Back, Talking Black 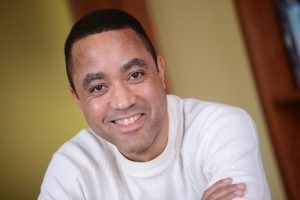 John McWhorter teaches linguistics, Western civilization, music history, and American studies at Columbia University. A New York Times best-selling author and TED speaker, he is a columnist for Time and regular contributor to the Atlantic, Wall Street Journal, and Washington Post and the host of Slate’s Lexicon Valley. His books on language include The Power of Babel, Our Magnificent Bastard Tongue, What Language Is, The Language Hoax, and Words on the Move.

John McWhorter earned his B.A. from Rutgers University, his M.A. from New York University, and his Ph.D. in Linguistics from Stanford University.

We talk about his latest book, Talking Back, Talking Black: Truths About America’s Lingua Franca.

EB: Thanks for writing this book. You’ve managed to show both the complexity of African American Vernacular and the complexity of the issues surrounding public attitudes about vernacular language and correctness. As writer, how did you choose the material to discuss—which goes far beyond the usual textbook treatment?

JM: What moved me was two things – 1) that I don’t think we linguists have made a dent in the public’s reception of the dialect in pointing out that it is systematic in its grammar (and I really mean “we,” as I wrote a book on Black English in the 90s and have written on it fairly often since), and 2) that I don’t think racism is the only thing keeping people from understanding.

So, I decided to approach Black English from the perspective I have seen laymen to have, rather than trying to give them a kind of “Linguistics 101,” which is the foundation of the “systematicity” argument – you’ve taken some phonology and syntax and you want to talk about GRAMMAR, but the public hasn’t had those courses and can’t hear what you’re saying in any real way. I gathered the kinds of questions the public usually has and frankly, the misimpressions they often so earnestly insist upon (that Black is “minstrel,” that there’s no such thing as a black “sound” except that black men have deep voices, and so on) and address them head on. That meant showing how the dialect is COMPLICATED, not just “systematic,” addressing what minstrel speech actually was and how there was a delicate, but real, intersection between that and how black people in the nineteenth century actually spoke, and also getting at something that we linguists can forget that the general public in America does not readily understand: diglossia. Most laymen think you speak one way, and that how you talk in your kitchen signifies how you talk when giving a speech. I’m not sure there is a pop source that teaches the public what diglossia is and how common – even universal – it is in how people speak. I tried to help out with that.

EB: I was particularly fascinated by the intimacy marker up, as in your example “We was sittin’ up at Tony’,” which I had heard used but never understood before. When did you first figure out the nuance to that?

JM: I’m not sure when that occurred to me, actually – sometime in the 90s, I think – probably in 1999 when the person I mentioned said “There was buck naked people up in my house.” That person was, as it happens, a white guy doing a fond kind of imitation of black speech (in the vein today often called appropriation although, as I have written, I find that analysis strained when it comes to speech). I was struck that his mimicking was good enough that he used that “up” – it struck me as especially authentic and then the “linguist hat” goes on and I thought “He is using that UP spontaneously but really, what is the function of it?”

I always have my ear cocked to vernacular constructions and am always trying to figure them out – I think it’s part of my being first, hardwired to be a linguist sort and second, black, such that I grew up hearing a certain variety of speech styles. An example would be that, as I describe in the book, when I was a kid and heard my cousins using the narrative HAD, my natural impulse was to quietly try to figure out how that usage made SENSE, rather than just dismissing it as “slang” that “they” use.

EB: What the significance of the title? I have to admit, when I mention the book to people I have to stop and think about the order of the words BACK and BLACK.

JM: Honestly the publisher thought that one up and I have rarely given it much thought! I had a different title – “How Do You Sound Black and Why?” That probably wasn’t good enough – book titles don’t come easily to me.

EB: You also describe Black English as America’s Lingua Franca. What do you mean by that?

JM: That since the nineties especially, ASPECTS of Black English have become a part of the speech repertoire of people beyond black America. First, Latinos, but now even many Asians and finally whites, especially young men. Pragmatic markers (yo, naw for no, etc.), aspects of inflection, and associated gestures are now so embraced by such a wide variety of people that to many young people the idea of Black English as specifically “black” sounds off. Now, as a linguist I specify that it isn’t that people beyond blacks (and Latinos) are actually using the full blown phonology and syntax of Black English. However, a lot of white kids, using a certain amount of the slang and intonation, consider themselves to be using “Black English,” which was all but unheard of until the 90s. It’s been part of the browning of the culture, as some have called it.

EB: Why do you think Black English is so difficult for Americans—Black and White—to wrap their heads around? Because of the complexity of race or the obscurity of linguistics, or both? 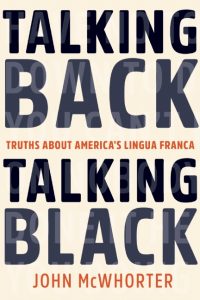 JM: Obviously both, but I honestly believe that the linguistic aspect dominates. It rankles some for me to say that – our moment encourages academics to stress racism over all, and at times that’s necessary. But the general public finds rural white Southern speech quite absurd, often, as well, and if there had ever been a push to use it as a teaching tool Fox News would have had a grand old time with that as well. Americans, because English is RELATIVELY homogenous here compared to England where it has had longer to differentiate, have a hard time processing that English can come in assorted flavors and still be legitimate. There is also an Anglophone First World bourgeois obsession with grammatical “correctness” in general – people are quite vicious about supposed grammatical errors. Does the viciousness step up some when black speech is involved? Perhaps, the race part is, in itself, just one part.

EB: Are there some common misconceptions about Black English shared by Black and White speakers?

JM: Certainly. Most people think Black English means slang, which makes any discussion of its “legitimacy” seem absurd. Linguists talk about the grammar of the dialect, but to laymen, “grammar” is a matter of things people do WRONG, not all of the complex ways that we put words together otherwise. So Black English seems to be slang and mistakes to most.

EB: You mention the Blaccent, as your call it, and that there are several different levels of the African American accent. Can you tell our readers a little about that?

JM: Most black Americans have vowel colorings that are subtly different than other Americans’, which is much of what we hear as the “black sound.” Then, some black people do not have those colorings, but still produce their speech with a slightly different “timbre,” in the sense we usually use re singers, than others. That signals another aspect of the black “sound.” These differences are internalized quite subconsciously from infancy on, and have nothing to do with right or wrong, anymore than the different vocal “placement” of British English is. I was struck by how absent from public writings this interesting aspect of black speech is beyond a certain point, and one of the things I most wanted to get across in this book was that there IS a such thing as sounding black and that there’s nothing wrong with it in any way. If the book leaves any shred of difference in public perception I hope it is that.

EB: Thanks for talking with us. Congratulations on a fine book.