My Dinner with Harlan

When I was in high school two of my favorite books were Harlan Ellison’s The Glass Teat: Essays of Opinion on Television and The Other Glass Teat. They were feisty books of cultural criticism based on Ellison’s weekly column for the Los Angeles Free Press in the late 1960s. The title vision of TV viewers fit my high school mindset (along with Herman Hesse and Franz Kafka, you know the type), and the books sent me to the dictionary every other page so I was convinced they were a serious read. 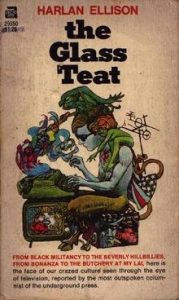 I read more Harlan Ellison, graduating to the Dangerous Visions collection and Again Dangerous Visions, with their equally abrasive introductions. I was cheering from the sidelines when Ellison wrote “City on the Edge of Forever.”

College and grad school intervened, with linguistics taking the place of speculative fiction. But I still kept an eye on Harlan’s career, enjoying a wonderful Comics Journal interview where he confesses to sliding down a conference table to deck Irwin Allen, the producer of Voyage to the Bottom of the Sea. Because why not.

Year later—maybe a dozen—I was surprised to learn that Harlan Ellison would be speaking at the university where I was teaching—the University of Alabama in Birmingham His visit was cosponsored by the Honors Program and Ada Long, the chain smoking honors director, was looking for an English professor to chaperone (as it were) the honors students who would go to dinner with Harlan after his talk. As it turned out, of the 25 or so English professors in the department, I was the only would who would admit to knowing who Harlan Ellison was, so it was on me. 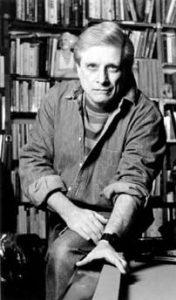 The dinner, which included Harlan, my wife and me, and a half dozen students went pretty much as you might expect. Harlan argued with the students about just about everything. I sat at the far end, sipping a beer and keeping my head down. I remembered the story about Irwin Allen.

We got back to Harlan, who was waiting with my wife, and shaking his head ever so slightly. I never asked why, but I always imagined that we had all expected something dramatic to happen at a dinner with Harlan Ellison—a crime, a brawl, the apocalypse, whatever. Harlan, it seemed, knew better.