An interview with Dante Fumagalli 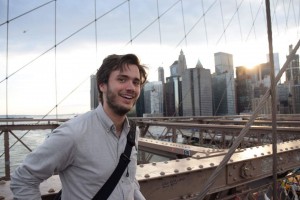 Dante Fumagalli is a senior at Southern Oregon University studying English and Art History. He is passionate about education, the arts, and accessibility.

EB: Tell us a little bit about your internship at MoMA.

DF: I interned with the education department at the Museum of Modern Art in New York City from June 8 to August 12. My time was specifically split between Community and Access Programs; School and Teacher Programs; and Interpretation, Research, and Digital Learning.

EB: What sort of things did you do?

DF: Being split between three different departments, I ended up doing a lot of varying tasks. With Community and Access, I mostly helped facilitate programs. MoMA offers a wide variety of programs for people with disabilities and it was great to see the extent of how MoMA serves these populations. I also got to attend and help facilitate a professional development conference for teachers called Connecting Collections which is hosted by MoMA, The Met, and The Guggenheim. It was amazing being able to meet people from all of these different museums, in addition to teachers from around the world who came to New York to learn more about arts education. I got to develop a lesson plan for a gallery session centered on the essential question: How did artists in the 1960s make use of everyday objects to explore political, personal, and conceptual themes?

EB: What did you learn?

DF: I learned a lot about best practices in museum pedagogy. At Southern Oregon University, I’m a staff member and a docent at the Schneider Museum of Art. My general teaching style when leading groups through the museum was friendly, but also primarily didactic. At MoMA, they stress the importance of inquiry-based teaching strategies. Watching professional museum educators and going through the many training resources that the museum offers really has changed the way that I approach teaching in these spaces.

EB: How did the work complement or expand on your academic studies?

DF: When I was working on my lesson plan, I made use of a lot of the theory that I’ve learned in both my art history and literature classes. One piece in particular that I used was Black Girl’s Window by Betye Saar. I first was exposed to Saar’s work in a class I took called Race, Gender, and Ethnicity in Art with SOU professor Jennifer Longshore. We discussed how her assemblage piece, The Liberation of Aunt Jemima used found objects to compose a comment on racist imagery in the United States. This was a great foundation for my work with Black Girl’s Window, which similarly uses found objects.

EB: What was the most interesting aspect of the internship? Any surprises or revelations?

DF: For me, the most interesting part was helping out with the program Meet Me at MoMA. It’s designed for people with Alzheimer’s and their caretakers. The framework for the program is hugely influential in Museum access worldwide, so it was incredible to see the program happen. Educators at MoMA are very patient and for this program they really extend their inquiry-based methods and bring out discussion amongst participants. At one point during the program, we visited a Roy Lichtenstein painting and one man who had been mostly silent the whole time became visibly excited and told us a story of how he had gone to school with Lichtenstein. It was really moving.

DF: I loved New York, though it was very overwhelming at first. The day I arrived, after I picked up my bag, I just remember stepping outside of the terminal at La Guardia and trying to make sense of all the chaos that was going on ahead of me. And that was only in Queens! I lived in Belmont, a neighborhood in the Bronx right across from Fordham University which was nice but also meant that I had quite a commute. If anything, though, that commute motivated me to go out and see the city much more than I probably would have otherwise. I made a concerted effort to go see all sorts of sights after work. My MoMA ID also allowed me to attend other New York cultural institutions for free so I definitely tried to make the best of that. During my time I visited The Met, The Met Breur, The Studio Museum at Harlem, The Bronx Museum of Art, The Guggenheim, The Brooklyn Museum, and MoMA PS1. It’s crazy to me that with all of that, I still missed out on so many other things in such a crazy city.

I definitely want to come back after I graduate. I’ve been doing research on year-long museum education positions in the city and I’ve found that The Met, MoMA and The Brooklyn Museum all offer paid 12-month internships I’m going to be applying for. I found that once you get used to getting around this city, it’s easy to become attached. So many of the other interns I met shared this feeling with me; it definitely brought us closer.

EB: Any advice for other students thinking about internships?

DF: Don’t sell yourself short. You don’t have to be at a school like Harvard, Yale, or Columbia to get one a coveted internship in the professional world. While I was filling out my application, I nearly talked myself out of it. I thought there was no way that they were going to accept me, a student from a small school in Oregon who isn’t even an art history major, at one of the most well-known museums in the world. Even my first day, I still could hardly believe it. It didn’t help that the first person I met was working on his PhD in art history and here I was still in school. But I was able to contextualize the experiences I have had and relate them to the mission of MoMA in my application and in my interview. And I think that’s the most important thing when applying for jobs. You have to give yourself credit for what you have already done and see how that fits in where you’re applying.

DF: Thank you! I appreciate getting the chance to reflect on and talk about my experience.

1 Response to An interview with Dante Fumagalli