An Interview with Tod Davies, author of The Lizard Princess 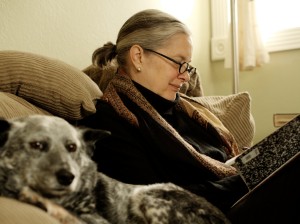 TOD DAVIES is the author of two cooking memoirs Jam Today: A Diary of Cooking With What You’ve Got and Jam Today Too: The Revolution Will Not Be Catered and three tales in The History of Arcadia series: Snotty Saves the Day, Lily the Silent, and the just-released The Lizard Princess.

Tod Davies is a proud member of the Southern Oregon Literary Alliance, and you can meet her at the Ashland Book and Author Festival, October 3 at the Hannon Library at Southern Oregon University.

EB: I really enjoyed The Lizard Princess—and all of the Arcadia tales. But the three books in the Arcadia series seem to have very different audiences.

TD: Sheer illusion, Ed. Well, yes, they’re meant to LOOK like that. First a children’s book, Snotty Saves the Day, though with footnotes that make you think, “Wait a minute maybe there’s more here than meets the eye.” And then a YA novel, Lily the Silent, complete with teenage love story and romantic illustrations. And now the “literary” novel, The Lizard Princess. But really, in my head, the audience is the intelligent fifteen year old in all of us. I was that fifteen year old. At sixty, I am STILL that fifteen year old. By which I mean, the reader who wants to know answers to the great questions: “Who am I? What are we doing here? What should we do? What should I do?” The History of Arcadia books are meant, among other things, to be a genre questioning series. What if we grouped books by their values, by what issues they wrestle with, rather than artificially by age? I personally get more out of Madeleine L’Engle’s “children’s” books, and Ursula LeGuin’s “young adult” books than out of most contemporary literary “adult” fiction. Not all thank goodness. But an awful lot of it.

EB: What’s the attraction of fantasy and fairy tales to you as a writer? And do you think it’s the same attraction for readers?

TD: Fantasy and fairy tales express desire for answers to just the questions above, don’t they? They deal with issues of good and evil; they do not pretend, as we do too often in the modern world, that good and evil are ‘relative’ concepts, ideas that don’t really exist in the ‘real’ world. They get in and dig up our true desires as human beings, the wonderfully irrational ones as well as the tidily rational. They are a door to further truths about ourselves not necessarily accessible in the accepted discourse. And I think all serious readers hunger for those truths of imagination. I know I do.

Further—really great fantasy writing is about imagining a better world here and now. Tolkien. LeGuin. Octavia Butler. Imagining what may not be working here, and fantasizing about what would work better. What would satisfy desire. What would make us a better world.

I loved what a writer for Bitch magazine called this kind of writing: “Visionary Fiction.” That’s what I like to think I write. My husband always wanted to know why on earth I was writing fantasy, then, after reading Lily the Silent, he said, “I understand now. You’re using fantasy to engage with what you think is wrong with our world…and what could be right.” I got up at the dinner table and kissed him when I heard that. It’s more than that, of course. But that’s not a bad place to start.

EB: The stories and relationships are wonderfully complex. How do you keep it all straight? I feel like I need a genealogical chart. 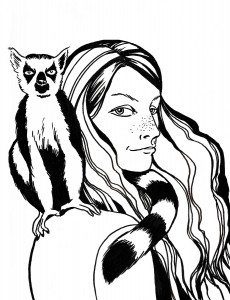 TD: I know, I know. Mike Madrid, who designs and illustrates the books, keeps wanting to make one—but we can’t just yet, since there are some surprises still to come in who parented who, in who is related to who and in what way. It’s a whole world out there that rushed in on me, and all these relationships just keep tumbling out. No lie. When I say in the books that the other world sends them to me, and is trying to communicate with our own, I’m really not kidding. All these people are alive. And moving around. Falling in love. Having children. Making choices. All these stories…it makes my head spin. I can only pray I manage to simplify enough so that the reader isn’t confused. Yikes.

EB: Much of your recent work has been about food narratives and fairy tales. Are these interests related in some way? I wonder if food writing is a kind of fantasy or if fairy tales are a kind of ethnography. What do you think?

TD: Oh, definitely, definitely. All of the above. But even more: my food writing comes from exactly the same place as the fairy tales. The place that says: what do we really want? What really makes us happy as human beings? How can we work on making ourselves and our loved ones happier, and then, after that, the people around us? How can one individual finding out who they are and what they truly desire lead to greater good, greater happiness, for a wider group of people?

Of course food is the way you can meditate on these questions THREE TIMES A DAY. And at least once a day through wine! And all day…and all night…through imagination. Through Fairy Tales, or, even better, as Maria Tatar renamed them, Wonder Tales.

EB: I’ve been reading lately about the history of the Grimms’ fairy tales. The Grimms wrote that “Wherever the tales still exist, they continue to live in such a way that nobody ponders whether they are good or bad, poetic or crude. People know them and love them because they have simply absorbed them in a habitual way. And they take pleasure in them without having any reason. This is exactly why the custom of storytelling is so marvelous.” Would you agree?

TD: How awful to disagree with two men I admire so completely. I do sort of agree that “nobody ponders whether they are good or bad, poetic or crude” (except—ahem!—maybe the Grimm brothers and a few generations of critics). But I can’t agree that people love them without reason, because they are ‘habitual’. It seems to me you have to ask why they became habitual in the first place! My feeling is they are part of the warp and woof of life, and loved for that reason. The custom of storytelling is so marvelous because it opens a door to the great depths beneath the surface of our every day existence…our cultural consciousness, as it were. This domain is where needs, desires, deep feelings that have been pushed aside in our framing of the present culture still pulse with life. Storytelling—properly done—opens the door to these, in the form of symbols that can be taken in by us, personifying vaguely felt truths, playing with our present beliefs, and perhaps finally taking solid form as a new idea we may not have been ready for until the time it is most needed. And Goddess knows, we need some of those new ideas now.

EB: Who are your inspirations as a fantasist? 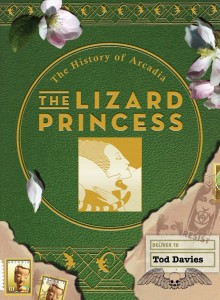 TD: Ursula K. LeGuin is just it for me, for all sorts of reasons. Her imaginings always come from the position of the true Wonder Tale: what if? What if things were different? What if we knew what truly matters? Her images pack human desires and possibilities into images it’s almost impossible not to love. J.R.R. Tolkien, for the same reason. C.S. Lewis.

I’ll tell you an odd story. I was in a hospital in Headington, which is a suburb of Oxford, in England, having an operation. And as I went under the anesthesia, J.R.R. Tolkien and C.S. Lewis, wearing 1950’s business suits, walked across the hospital floor and bent benevolently over me, reassuring me that all would be well. I woke up after and told the doctors they needed to patent that formula! But here’s the very weird thing: years later I found out that both Tolkien and Lewis had lived walking distance from that hospital in the ‘50s. Isn’t that odd? No wonder I trust the truths of imagination!

EB: The illustrations add a lot to the story for me. How do you decide on the proper amount of illustration to go along with a story? How much is too much or not enough?

TD: The illustrations for both The Lizard Princess and for Lily the Silent are by EAP creative director Mike Madrid, and the best thing I can ever do is trust his taste and his inspiration. He always seems to have a total grasp of what I’m tearing my hair out trying to express. It never ceases to astonish me how intuitively he plans the illustrations to go with the text.

That said, I don’t want you to think there are no disagreements. Where would creative activity be without disagreements? But when it comes to the illustrations—both the number and the type—if there’s a major disagreement, the illustrator wins. I think that’s fair!

EB: On a totally different note, which Arcadian characters are your favorites? I have to admit a certain fascination with Devindra Vale and Aspern Grayling.

TD: Oh, gosh, I love them all. Sophia, of course, is my not-so-secret favorite. And Leef, her lemur. I love writing Livia, because she’s so thoroughly out front about what she thinks, and it’s not necessarily for the good of the world, those thoughts. Along with you, I love Devindra: she’s so rationally brilliant and femininely wise at the same time. And speaking of Aspern Grayling, I … well, we’ll have to see what comes next with Aspern and Arcadia.

EB: What’s next in The History of Arcadia Series? I’m hoping there is more in store for us. 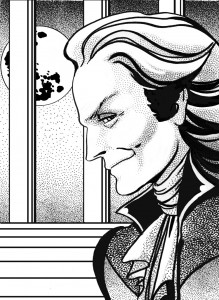 TD: Aha! I have to tell now! The next book is written by Aspern Grayling, my endlessly charming and self-regarding villain. It’s his Report to Megalopolis, an NSA style dossier of facts about Arcadia, for the use of the Megalopolitan Council of Four (which pays for the report with a generous grant for which Aspern is properly grateful, of course). As people inadvertently do, he’ll tell his own story as he tells his version of Arcadia’s.

After that, we’ve got planned a Megalopolis/Arcadia cookbook. One side filled with recipes from Megalopolis (calories counted! measurements made clear to the nth degree!), then you flip it over, and there is a cookbook from Arcadia. That will be major fun for me, and maybe make it a little more plain what food and fantasy have in common. After all, they both nourish us, the one feeding the body, and the other the soul.

Both, by the way, going very well with a glass of wine!

TD: Thank YOU, Literary Ashland. And now, what about that glass of wine you promised me?

Edwin Battistella’s latest book Dangerous Crooked Scoundrels was released by Oxford University Press in March of 2020.
View all posts by Ed Battistella →
This entry was posted in Interviews, Literary Events in Southern Oregon, What People Are Reading. Bookmark the permalink.