An Interview with Precious Yamaguchi 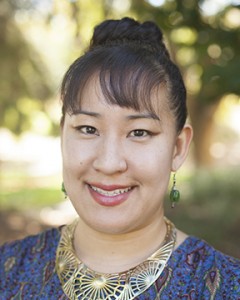 Among her awards are the National Communication Association Top Paper Award for in 2008, the Winifred O. Stone Graduate Fund Award for Outstanding Graduate Student in 2009, and the Top Dissertation Fellowship Research Award at Bowling Green State University for the 2009 – 2010 academic year.

EB: How did you come to write this book?

PY: As I was growing up as a young child, I would hear my grandparents speak about “camp” every once in a while. I was only familiar with the word “camp” as it relates to summer camp or day camp and they would briefly explain to me that the camp they were in when they were teenagers was very different, that they were imprisoned and their whole family was taken away from their homes, they lost everything they had, and had to leave their pets behind. As a child, it was heartbreaking to hear that my grandparents were once prisoners and as I grew older as a young adult, I saw that a lot of the ways my grandparents communicated and lived were influenced by their internment camp experiences, and how the internment camp mentality didn’t become erased the moment they left the internment camps, it has stayed with them throughout the rest of their lives. Everyday life situations such as my grandparents really encouraging my cousins, brother, and I to get an education because they did not have the opportunity to attend college because once they were released from the internment camp, they had to work right away because their families lost everything, and also how my grandparents are very embarrassed to speak Japanese and did not teach my parents the Japanese language because there was so much prejudice and suspicion against Japanese people during that time, they felt the safest thing to do was raise their children to be as American as possible. My grandparents’ generation felt a lot of shame and fear, but they were also very brave and did everything they could to rebuild their lives and I wanted to share their stories and other Japanese Americans’ stories through this book. The most interesting part of the Japanese American internment camp experience is not only the internment camps, it is what Japanese Americans did once they were released from the barbed wire camps. They had no homes to return to, many schools were still very prejudice against Japanese Americans and would not let them in their schools, landlords did not want to rent to Japanese Americans out of racism and fear they were bring property prices down, and a lot of companies, institutions, and stores did not want to hire Japanese Americans even after World War II. It took me around eight years to find and interview Japanese American women who were in their 80s and 90s in various parts of our country such as California, Michigan, Ohio, and Nevada to tell their stories. Some of them had never told their stories to anyone and felt an urgency to share their narratives because they started to see many of their peers pass away and wanted to share their stories before they passed away too. Three of the women I interviewed for my book, unfortunately, passed away before it was published.

EB: Who did you have in mind as your audience?

PY: People who are interested in Asian American history, American history, communication, Ethnic Studies, and anyone who is interested in reading an inspiring story about overcoming challenges and hardships. It does not matter if the reader is Japanese American or not, there will be many themes readers can relate to such a intergenerational communication, overcoming struggles, and I hope it encourages the reader to reflect on their own families’ stories and ask their relatives , grandparents, and parents questions about their families’ histories. 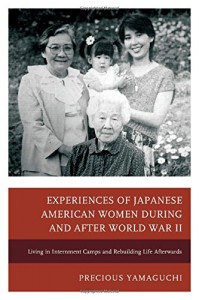 EB: In the book you examine the experiences Japanese-American of women of different generations as well. What did you conclude?

PY: One of the most significant conclusions I found that relates to not only Japanese American women, but the majority of people in their 80s and 90s, is that a lot of elderly people need people to visit, converse, and engage ideas with them. It was so interesting to see how many of the individuals I spoke with were so happy to have me visit them, listen to them, and be interested in their story. I was really surprised when some of Japanese American women told me they had never told their story before and that their children or grandchildren never asked about their stories.

More specifically, I found out Japanese American women, worked from a young age because the majority of them had to find work the moment they were released from the internment camps, so at 15 or 16 years old, they were working as domestic servants, factory workers, and nannies. My grandmother worked at the Nabisco factory when she was released from the internment camps and her mother had cancer at that time so she had to care for her mother, carrying her in and out of the bath tub, taking her to appointments, and financially supporting her, even though she was just a young teenager. No matter what socio-economic status these women were, they all worked very hard at a young age and lived very independent lives because even though they were only 15 or 16 years old, they would have to take a train by themselves to work as a domestic servant or factory worker in a city, town, or state, where they didn’t know anyone or have any resources, because their families lost everything they had. These experiences and memories of losing everything they had and having to grow up very quickly in a country that was prejudice against them, stayed with the women throughout their lives. Even though they may not speak about it often or at all to their love ones, their memories are painful, and there was so much rebuilding they had to do after World War II.

EB: There is also an aspect of memoir here. Was it difficult to combine memoir with ethnography?

PY: It was definitely difficult in this instance to combine memoir and ethnography for this book because I wanted to produce ethnographic research on Japanese American women, but during the time I was interviewing people and writing this book both my father and grandmother, who I was very close to, passed away unexpectedly. So it became even more crucial for me to write down the stories of people, because I was having loved ones pass away and was realizing how when people pass away they take their stories and unanswered questions with them. At the same time it was painful to have to reflect on their lives because I missed them so much. Also, my family has been very active in the Japanese American community in Los Angeles so a lot of the people I interviewed knew about the passing of my father and grandmother and would inquire about it. I felt including an aspect of memoir and autoethnography was important to show the first-hand experience I had with intergenerational communication between Japanese American grandparents who experienced World War II and how their perspectives influenced the way they communicated with their children and grandchildren. Intergenerational communication with grandparents, not just Japanese American grandparents, can be difficult because each generation has lived through different politics, events, and moments in history, which influence their values, beliefs, and the expectations they have for their children and grandchildren.

EB: What was the research process like for studying the Japanese-American internment?

PY: I really felt that the research for this book had to be ethnographic because both myself and the readers should be engaged in the various sources, experiences, observations, and narratives in Japanese American culture. Books such as Only What We Could Carry: The Japanese American Internment Experience by Lawson Fusao Inada and Nisei Daughter by Monica Sone, gave great perspectives on writing about Japanese Americans. I also felt that it was important to start with my family’s experiences, using interviews, observations, and writing as part of them research, and then continue to interview, interact, visit, and observe more Japanese American women who I found through personal connections and with the help of the Japanese American Citizen’s League in Los Angeles, Cleveland, Detroit, and the Japanese American National Museum was also a wonderful resource for me because they have a lot of artifacts and installations devoted to the peoples’ stories. Because I was interviewing elderly women, sometimes I would have to meet or speak to them multiple times because they would get tired or they would forget specific details and have to look up the details in their past letters, journals, or photos. A lot of Japanese American women were so helpful because even after we completed our interview, they would send me photos, artifacts, or letters through they mail, that they were able to retrieve or find after out interview.

EB: How did the internment experience affect these women? Did you find differences in men’s and women’s experiences? And in the way the experience has been historicized by gender?

PY: I focused on Japanese American women because a lot of the ones who grew up during the time of World War II, were brought up to be very modest and were taught it is rude to talk about yourself too much, boast, or have people feel sorry for you. Typically you’re not supposed to talk about positive things about yourself because it can be seen as bragging and you’re not supposed to talk about negative things too much because it may come off as seeking sympathy. There is a bit of a double-standard when it comes to gender communication in the Japanese American culture, especially in regards to the older generations. There are certain Japanese words such as enryo or gaman that emphasize the qualities of modesty, holding back, and enduring, that have no word equivalents in the English language. A lot of Japanese American women had stories of racism, working, traveling, and overcoming so many challenges and hardships, but culturally, they were not brought up to talk about themselves so many of their stories have gone untold. It was great to interview them because most of them have never had a person ask them about their lives, stories, or just give them opportunities to talk about themselves.

EB: What was the most rewarding aspect of writing the book? And what was the biggest challenge?

PY: The most rewarding aspect of writing this book has been giving the completed publications to the women and seeing their faces of disbelief and surprise that their story is part of history, culture, and literature! I enjoyed the interviews I had with all of them and the experience of writing my first book. I share the beliefs with Morris Young and Kent Ono, who are also Asian American scholars, that the act writing becomes part of the research and its great to represent Asian Americans’ experiences through writing.

The most challenging part was the death of my father and grandmother while writing this book. There were some moments I felt like I couldn’t write the book any longer and just wanted to bury the project, especially when I had to listen to the recordings and write of the interviews I had with my grandmother who passed away, but it actually became a very powerful way to reflect, hear, and listen even more closely to my grandmother’s story.

PY: Thank you for your interest!