You’re never bored when you are a linguist 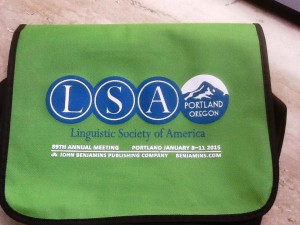 Why do we call computer cookies “cookies”? What’s up with pronunciations like “warsh,” “bolth” and “aig”? How come we have the noun “stick-to-itiveness” but no adjective “stick-to-itive”?

You’re never bored when you are a linguist. And that’s never more true than at the Linguistic Society of America. I just got back from the 2015 annual meeting—the 89th—held in Portland, where made some new friends and I caught up with former students, old friends and colleagues, and even a former professor of mine.

My brain is full and my to-do list is overflowing with new ideas and insights from the talks and workshops. Among other things I attended a slew of terrific papers on the Pacific Northwest Dialect, new approaches to teaching linguistics and talking about language with the general public: Arika Okrent explained the values of her Mental Floss listicles, Neal Whitman recounted his experiences as a guest writer for Grammar Girl, and Michael Erard talked about the hot new magazine SchwaFire. I learned about outreach efforts like the Ohio Language Pod–a research lab at the Columbus Center of Science (hey, Science Works!, we need to do this).

I made some short term plans (I need to talk about the “inner circle free pass” in class soon and revamp my discussion of Pacific Northwest dialects asap) and some long term plans as well (Dennis Preston and I have an idea…). And I need to buy Roger Shuy’s new book on The Language of Murder Cases and Rochelle Lieber and Pavol Štekauer’s The Oxford Handbook of Compounding (which won the Leonard Bloomfield Award from the Linguistic Society).

At the presentations I’m amazed at how funny and incisive my colleagues are, and how they manage to do both at once. And I come away from the book exhibit with some free pends and a long bibliography of new textbooks to check out. I’m planning to advantage of the special offer for the online Dictionary of Regional American English.

And that’s not all. The Linguistic Society meets with the American Dialect Society, which has its annual Word of the Year (WOTY) open vote, hosted this year by Ben Zimmer. The room was too crowded and raucous for me a make my pitch for “normcore” as a valuable new word, but at least it escaped the ignominy of being “least likely to succeed.”

Edwin Battistella’s latest book Dangerous Crooked Scoundrels was released by Oxford University Press in March of 2020.
View all posts by Ed Battistella →
This entry was posted in Language. Bookmark the permalink.