An Interview with Michael Baughman 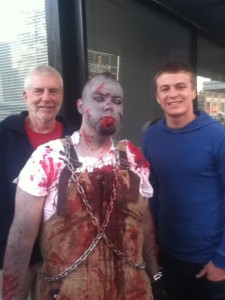 Michael Baugman, with his grandson Billy and a zombie friend

Michael Baughman, a freelance writer, has contributed to Evergreen Review, Sports Illustrated, National Wildlife, Honolulu Magazine, and many other publications. He is an emeritus professor of English at southern Oregon University and the author of Boat: A Memoir of Friendship (Arcade Publishing, 2012), A River Seen Right: A Fly Fisherman’s North Umpqua (Lyons Press, 1995), Mohawk Blood (Lyons Press, 1995), and (with Charlotte Hadella) Warm Springs Millennium: Voices from the Reservation (University of Texas Press, 2000). His latest book is Money Sucks: A Memoir on Why Too Much or Too Little Can Ruin You (Skyhorse Publishing 2014).

EB: Why did you write this book? Did you have a particular goal or audience in mind?

MB: Unless I have an assignment from a magazine or newspaper, I never have an audience in mind, so I suppose that makes most of my writing largely self-indulgent. For me writing books is a way to force myself to deal with an idea, an issue, a problem, a place. The goal is to produce something that seems to make sense, to clarify something, to work as writing. The typical American obsession with money – making it, spending it, wasting it – has fascinated me since I was a child.

EB: You also wrote Money Sucks for your grandson. What was his response when he read it?

MB: My grandson Billy called me from Denver late one night to tell me he’d read the book straight through and liked it very much. We’re close, so of course he wouldn’t have admitted he didn’t like it, but I believed him.

EB: What do you suppose shaped your attitudes toward money the most—having enough or not having enough?

I think a frantic quest for money ruined my father’s life. He was a successful businessman who, despite his success, was never satisfied. He could never stay in the same job, or town, or house, or apartment very long. When I was a schoolboy between the ages of ten and seventeen we moved from Pennsylvania to Texas to California to Hawaii and back to California again. But he never found happiness, or even satisfaction, and smoked and drank himself to death at age sixty-one.

At Punahou, an expensive private prep school in Honolulu, I established friendships with many boys and girls who were either born rich or became rich, and these friendships have lasted more than sixty years. Some of these men and women are fine people, but I’ve seen nothing in any of them that suggests they’re more satisfied with their lives than most middle-class people I’ve known. In fact, the miseries of the rich are often phenomenal.

After dropping out of college I bummed around the country: forty-eight states in a year-and-a-half, working odd jobs and sometimes homeless. True poverty is horrible, but I found that so-called working class people often seemed like more substantial human beings than the very rich.

EB: One lesson of the book is that there is more to a good life than money. How would you characterize a good life?

MB: As I tried to suggest in the book to Billy: live in a place you want to be, and do work you truly want to do. The Hawaiian beachboys I knew growing up were the happiest group of people I’ve ever seen.

EB: What should we be teaching about money in the schools? If you were designing a personal finance curriculum, what would it be?

MB: I’m not sure exactly what we should be teaching. What I am sure of is that what Alexis de Tocqueville wrote in Democracy in America remains true today: “As one digs deeper into the national character of the Americans, one sees that they have sought the value of everything in this world only in the answer to this single question: how much money will it bring in?”
So I suppose schools should expose students to such sentiments, and the exposure should lead to serious discussion and thought.

EB: I once heard someone characterize having too much concern for money as hoarding. Would you agree? 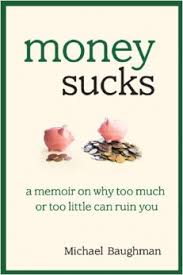 MB: I’ve known money hoarders, such as the couple I call “The Texans” in the book. They hate to spend it, but they love having it. That strikes me as a form of mental illness. Also in the book, I quote a retired CEO who surprisingly admits that the pay received by CEOs is obscene, and that competition is at the heart of the grotesque ratio between CEO compensation and average worker pay. If the boss at Corporation A gets twenty million a year, the boss at Corporation B wants twenty-five. That’s a form of mental illness too.

EB: Have you heard from any of the folks you profiled? Rich and not so rich? What did they think?

MB: I’ve heard from some of the not-so-rich. They were all right with the book. I sent the retired CEO a copy, but, even though I quoted him accurately, I never heard back from him. That doesn’t surprise me.

EB: It was interesting for me to learn about your work as a professional writer for Sports Illustrated and other publications. How is that writing different than the academic writing that we teach students?

MB: I was a Special Contributor at Sports Illustrated for several years, and wrote mostly on outdoor and environmental subjects. I think I was covering significant material that SI readers wouldn’t normally have been exposed to. Nowadays the magazine is pretty much for hard sports only. I don’t like to distinguish between different kinds of writing. All writing should be clear, economical and well organized, and it should deal with a significant and/or interesting subject.

EB: You also spend some time in the book discussing sports and athletics. What is their role in education?

MB: I played major college football, and I don’t have anything good to say about big-time college sports in general. Just as there are fine people among the rich, there are fine young men and women among college athletes – but the sports programs at the big schools are ridiculously overemphasized. I don’t see how anybody could deny it. And here we are back with money. Look what happened at Penn State. The sexual abuse of children was tolerated for years because of the money earned for the school by the football program.

EB: You are officially retired from academe, yet you continue to write. Does one ever retire from being a writer?

MB: I can’t not write, and I’ve been writing more than ever since I retired. It’s a necessary part of the day for me, as necessary as anything I do.

EB: What’s your next writing project?

MB: I have a novel coming out next spring, tentatively titled Growers Market. It’s about combat veterans growing illegal marijuana, with many subplots included. I’m working on another novel now, and also on an Afterword for a new edition of A River Seen Right.

MB: Trying to answer questions about my own work gives me a better understanding of what I’ve done. Thank you.

Edwin Battistella’s latest book Dangerous Crooked Scoundrels was released by Oxford University Press in March of 2020.
View all posts by Ed Battistella →
This entry was posted in Ideas and Opinions, Interviews, What People Are Reading. Bookmark the permalink.