An Interview with Kate Lebo, author of A Commonplace Book of Pie 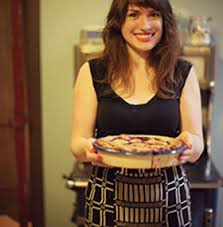 Kate Lebo‘s writing has appeared in Best New Poets, Gastronomica, The Rumpus, and Poetry Northwest among other places. She holds an MFA from the University of Washington, has been a recipient of a Nelson Bentley Fellowship and of the Joan Grayston Poetry Prize, and she is a baker and a devotee of zines. Her book A Commonplace Book of Pie was published by Chin Music Press in 2013 and she is currently at work on a cookbook called Pie School: Lessons in Fruit, Flour and Butter, forthcoming from Sasquatch Books in fall 2014.

She lives near Portland.

EB: I loved A Commonplace Book of Pie, which I found at the Chin Music Press exhibit at Wordstock. Why pie? Why not cake?

KL: I like to eat cake. But I don’t really care about it. Pie, on the other hand, can be mysterious, temperamental. A good pie can be hard to find. Pie has more symbols and clichés attached to it, so even those who don’t have personal experience with pie-making know how pie demands reverence that a cake does not. Also, pie is a sensory experience. I handmake every part of my pie crust. You can’t mix a cake with your hands.

EB: The pies, along with the wonderful illustrations by Jessica Lynn Bonin, are not in alphabetical order. You start with Pumpkin Pie and end with Peach Ginger Pie, with some great ones in between—Cranberry, Chocolate Cream, Rhubarb Custard, Mud, Mumbleberry, and more. How did you decide the order of presentation? 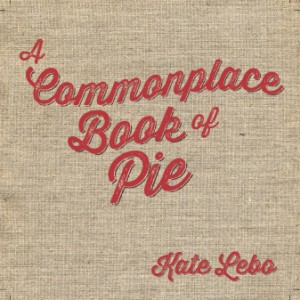 KL: The collection had to start with Pumpkin Pie because, as the very first poem I wrote in this series, it sets the tone and defines the conceit of the rest of the book. It’s a poem that tells you we’re going to use pies to describe and define a personality, we’re going to keep our tongue firmly in cheek, but there’s also some serious matters to attend to here. This poem wants you to pay attention to the possibility of materials (the pumpkin in a can of Libby’s “could be a porchlight or a smear on the street, or this can of future pie”), and to start to think about those materials as a metaphor. From there, I ordered the poems so they could build on and undercut each other and the reader’s expectation of where the book was going. Then comes the recipe portion of the book that gathers axioms, clichés, bits of wisdom, and recipe to invite the reader to finish the book by making a pie.

EB: Are recipes poetry? Or science. Or both?

KL: Depends on who’s writing them. Cook’s Illustrated recipes are closer to science, and proudly so. Mark Bittman’s recipes, with the way they leave themselves open to interpretation, are closer to poetry. As I’ve written Pie School: Lessons in Fruit, Flour & Butter, I’ve gotten completely obsessed with the balancing act of lyric writing and technical writing that’s present in my favorite recipes. The recipe must work. That’s the technical part. If you want the reader to crack an egg, you need state that with words that create clear action. But if you don’t want to bore yourself to tears, and if you’re interested in practice of cooking over the product of cooking, as I am, you long for lyricism, the invitation to feel and sense and interpret. I’m starting work on a new book that will take that tension as one of its themes.

EB: You teach both poetry and pie-making. How do the students compare?

KL: All my students are eager to make something they enjoy, that they can give to other people. Many come to class feeling mystified about how to do that with a pie or a poem. Their motivations—why they’re making pie or poems—are so diverse. I find that exciting and affirming.

EB: You are working on a recipe book called Pie School. Tell us about that project.

KL: Pie School is a collection of recipes and essays about fruit pie. I teach you how to make a pie from flour sack to cooling rack while using poetry and cultural critique to frame the domestic art of pie making. I hope the book will encourage readers to make what they can with what they have, trust their senses, and approach pie as the folk art and deep tradition it is.

EB: I read that you judged a pie contest. How do you do that?

KL: Start by eating the tip of the pie, then break off a bit of the crust and munch on that. Repeat for another 30 pies. Take notes. Remember which pies you didn’t want to stop eating. This will be a very strong feeling, hard to describe but easy to identify. That one wins. As with a lot of contests, it’s all a matter of taste.