An Interview with E R Brown, author of Almost Criminal 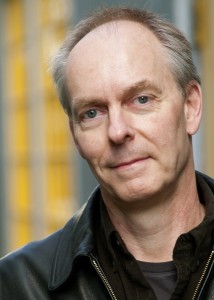 E.R. Brown is the Edgar-nominated author of Almost Criminal, published in spring of 2013.

E. R. Brown (whose first name is Eric) grew up near Montreal and now lives in Vancouver, where he writes and works as a freelance copywriter and communication strategist. His short stories have been published in nationwide magazines and dramatized by the CBC and he was won numerous awards for advertising and technical writing.

We sat down recently to talk about Almost Criminal.

EB: Almost Criminal is your first novel. Have you always been a writer?

ERB: I’ve always written, but I haven’t always considered myself a writer. For years I was involved in theater, media and music. Ultimately, though, writing is the only thing I’ve had real success with. I’ve been a technical writer, an ad copywriter and an editor. I’ve written speeches and video scripts. Storytelling has always been in the back of my mind. Prior to Almost Criminal, I had some literary short stories published, and the CBC (Canada’s public broadcaster) turned one story into an online drama.

EB: Among the accolades was an Edgar nomination. How did that feel?

ERB: I could not believe it. In fact, I didn’t believe it. One morning I did my daily Facebook check-in and saw a post from a writer friend, saying ‘WOO HOO for ER Brown this morning!’ and so on. I had to go to the Edgar website. I was certain she’d made an embarrassing mistake. I mean, really… I’m a first-time novelist with an independent publisher from Canada. Every other Edgar contender is an international success. Most are blockbusters. It was, and still is, amazing. I’m still pinching myself.

EB: I thought the book was both a coming-of-age story and a morality tale, with some social criticism and family comedy mixed in as well. Did you have a particular aim in mind in writing the novel?

ERB: When I began this project, I thought I was writing a family drama, and a coming-of-age tale of a young man struggling to find his direction. Crime was just one element of the story. But the character Randle Kennedy took on a life of his own, and the crime kept becoming bigger and bigger. Then the bikers showed up, and a boy’s struggles with his mother had to take a back seat.

I’m so glad you saw the aspects of social and family comedy. As a reader, I love stories that are grounded in the real day-to-day fabric of families, jobs and how we struggle to get by, and that’s what I wanted to do here.

EB: I enjoyed your lead character, Tate MacLane, the prodigy/dropout/barista who gets recruited to sell boutique marijuana. How do you put yourself in the mind of a teenager? 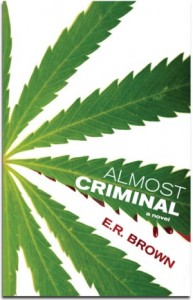 ERB: I have three children, and one of them was still a teen while I was writing the novel. Two of my kids worked as baristas in high-end coffee shops. But really, I just channeled that part of me that hasn’t fully grown up. That mouthy, opinionated teen who makes bad decisions is just under the surface.

EB: The story was quite suspenseful. I never quite knew what was going to happen to Tate next. What did you manage to build that suspense?

ERB: Thanks! I worked very hard on building the suspense. I’d never written a novel before, and I can honestly say I did not get it right in the first draft. The story went through several end-to-end rewrites as I worked on tone, voice and, more than anything, the narrative arc. All along, I wanted to create a gradual build-up of tension, as the smart-but-naive Tate digs himself in deeper and deeper.

EB: I’m also curious how you research the marijuana business, which has both underground and semi-legalized aspects?

ERB: You don’t have to look very far. There are a lot of people involved in B.C. Bud, and it’s not hard to find someone who knows someone. As Tate reflects in the book, who gives a damn about a grow op? On the block where I live today, there were three grow ops at one time, or so a neighbor tells me.

I did a lot of book research, of course. I spoke to people (indirectly, because no one would meet me face to face) and I visited the areas of BC and Washington State where the book is located. Every grow op described in the book is based on a real place. And some of the subplots, like the mayor of Vancouver telling police not to interfere with storefront cannabis businesses—and the provincial police taking down hippie-run shops with SWAT teams—are true stories, taken straight out of the newspaper.

EB: Tate’s family relations were also quite complex—his mother is an artist who has cancer, his sister is going to the wild side, and Tate is the anchor of the family. Is the chic drug dealer Randle a father figure for Tate?

ERB: A central aspect of the story is Tate’s struggle to navigate his way through to manhood. His father is out of the picture, and Tate takes better care of the family, especially his sister, than his mother does. But he desperately wants a role model, a mentor—a father. Randle is charismatic and wealthy. He challenges Tate’s intellect, pumps up his ego, and sees potential that no one else does. Anatole, one of the coffeeshop owners, is Randle’s opposite: he’s big-hearted and supportive, but he’s a bit of a doofus. They’re two possible father figures, and Tate’s need to choose between them or find a third path, is what drives the story.

EB: Almost Criminal is a wonderful concept. It’s strikingly original I think in the themes it explores—both of growing up and of the middle class drug culture. Some readers will inevitably compare it to the television series Breaking Bad. Were you influenced by that show at all?

ERB: As a huge fan, I find the comparison very flattering. But when the novel was first conceived, I’d never heard of Breaking Bad. I don’t watch much TV, especially when I’m in the thick of writing. After I had finished the first draft, an early reader mentioned it—but then I avoided the show, to be sure I wasn’t going to be influenced. Since finishing the book, I’ve seen the entire series.

EB: What’s your next project? Do you have a second novel in the works? Or something different altogether?

ERB: My second novel is about three-quarters done. It’s not a sequel, but it is a crime novel, based in both Canada and the US. Since it’s unfinished and doesn’t have a publisher yet, I’m not going to say anything more.

ERB: Thank you for your interest. It’s really rewarding to hear from people who’ve read this story. For years there was just me and a computer screen, and very little hope of even getting it published. It’s been a remarkable journey.