Who Needs Newspapers? An Interview with Paul Steinle and Sara Brown

Paul Steinle is a veteran journalist and news media manager who has been teaching journalism since 1991. From 1991-2001, he launched graduate journalism programs at the University of Miami and Quinnipiac University; from 2001-2010, he taught journalism and served as associate provost, Southern Oregon University, Ashland, Ore. From 1961-1990, Steinle was a broadcast journalist and news manager. He was the president of UPI and the Financial News Network; TV news director, KING-TV, Seattle, and WIXT-TV, Syracuse; he reported from Saigon and Hong Kong for Group–W radio news; and he was a reporter and producer for WBZ-TV and WCVB-TV, Boston. Steinle has an M.B.A. from Harvard, a M.S. from Syracuse University and a baccalaureate from Amherst College. He is also the co-author of Commune: Life in Rural China.

Sara Brown has over 30 years experience as a human resource professional, management trainer, columnist and educator in the newspaper business. She was vice president of human resources at The Columbian (Vancouver, Wash.), and manager of organizational development at the Los Angeles Times. Brown has a master’s degree from the University of San Francisco and a doctorate in human and organization systems from the Fielding Graduate Institute. She is also the author of How to Create the Life You Want After 50.

In 2010 and 2011, Steinle and Brown founded the nonprofit organization Valid Sources and launched the Who Needs Newspapers? project, a fifty-state snapshot reporting how American newspapers are recasting themselves in the digital age. Their research is reported in the soon-to-be re-released book Practicing Journalism: The Power and Purpose of the Fourth Estate (Marion Street Press, 2014).*

EB: What made you decide to embark on this project?

Professionally, we were intrigued by the constant proclamations that “newspapers are dead or dying.” This is a concern since experience and surveys have proven that newspaper journalists provide most of the independent reporting generated in the USA, and, should newspapers disappear or shrink significantly, we were fearful that citizens would lose a key information source about life in their communities.

So, we decided to go see for ourselves by visiting one newspaper in each state, interviewing their publishers and editors and reporting our findings on a website for everyone to read. Personally, Paul was retiring from his position as associate provost at Southern University in June 2010, and we had been contemplating getting an RV and touring the USA. So, by combining these two goals, we were able, simultaneously, to see the USA, at ground level, and fulfill a reporting mission. 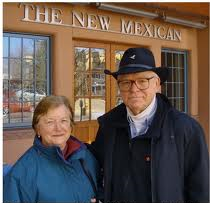 EB: What was the reaction when you set up interviews?

PS & SB: We ultimately visited 50 newspapers in 50 states. We selected each one, working about six weeks in advance, in consultation with the relevant state’s press association.

We were seeking newspapers that had won statewide general excellence awards and/or were innovative. We also selected among a mix of ownership categories – usually family or corporate – and among a balanced range of circulation sizes. We also sought three ethnic newspapers, and one alternative weekly.

Using those criteria, two major market newspapers – The New York Times and The Washington Post – turned down our request for interviews, and one small newspaper that was engaged in buying another newspaper also said no. Otherwise, we found 50 newspapers that were intrigued in our project, and, when they understood it, were all willing to set aside time to meet us and tell their stories.

EB: What is in more danger, newspapers or journalism? Are the two separable?

Newspapers are in danger because their traditional business model, which had produced high profit margins of 20-40 percent until about 2000-2005, has been squeezed for dollars by advertising competition – such as Craig’s List, which undermined newspapers’ classified ad revenue.

Newspapers have been squeezed for readers by competition from alternative news and information sources – many of them on Internet platforms – that have driven down newspaper readership and circulation figures.

Newspapers have responded by embracing the Internet to deliver news through digital channels and by devising new sources of revenue – online ads, online subscription fees and various direct sales techniques — to earn revenue. On the whole – when you combine newsprint readers and online readers — newspapers have probably increased their readership. But the new digital revenue sources have not been as lucrative as the display ads they could previously sell when they dominated the news market. There are too many alternative Internet news channels that keep ad rates, online, relatively low. 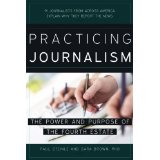 So, if local and national advertisers can achieve the sales impact they are seeking on the Internet alone, newspapers are going to be constricted further as their revenues shrink.

But, some advertising seems to work better via newsprint – like supermarkets with multiple items and those weekend inserts that newspapers drop on readers’ doorsteps along with the news. So newspapers have some unique selling properties.

The same seems true for newspaper readership. If the reading-a-newspaper habit dies, newspapers are similarly unlikely to last beyond the current generation of baby-boomers many of whom who still practice the newspaper reading habit.

Reading a newspaper and discovering the news on each page is a unique experience and perhaps that experience may endure, but the digital generation is not being nurtured on that phenomenon. So unless reading habits change, newspapers could have a limited shelf-life — hence the danger to their future.

As for the dangers to journalism, journalism has always been, and presumably will always be, a mixed bag of Pulitzer Prize winners and fish wrappers.

It seems reasonable to expect that some citizens will always want to be informed well. That there will always be a market for pertinent, accurate, compelling information. And the people who gather that information – the journalists — need to learn certain skills and certain ethical standards to ensure that the news they deliver is timely, relevant and comprehensible.

But journalism, per se, has lately been swamped by a tsunami of information-style products. They have arrived like a thousand food vans, driving up to your front door and trying to sell you dinner.

It’s easy to become inundated with so-called news. So perhaps finding valid journalism is a harder chore than it used to be.

Journalism would be in mortal danger if nobody continued to seek it any more, but it’s still in demand and is capable of being produced by the cadre of journalists this country has produced.

If you doubt they exist, listen to some of the journalists whom we interviewed on our website — www.WhoNeedsNewspapers.org. Or please read our book, Practicing Journalism: The Power and Purpose of the Fourth Estate, and meet some of them there.

EB: As you traveled did you get a sense of how newspaper readers felt as well?

PS & SB: We did not set aside time to talk in depth to newspaper readers on our journey.

EB: The Oregonian recently announced it was cutting jobs and reducing home delivery. What do you make of that?

PS & SB: That’s a strategic move by Advance Publications, a newspaper firm owned by the S.I. Newhouse family, which controls The Oregonian. Advance is seeking to develop a new business model that can support a local newspaper.

In 2009, Advance shut down the print-side of The Ann Arbor (Mich.) News and replaced it with an all-digital online newspaper. Then Advance started publishing a several-times-a-week print edition, again in Ann Arbor.

Advance also owns the New Orleans Times-Picayune newspaper, which since June 2013 is now printed and delivered three-days-a-week, and supplemented with a newsstand-sales-only tabloid on the remaining days.

Advance has come up with a similar formula for Portland. In October 2013, the Oregonian reduced its delivery cycle – this time to four days a week – and laid off personnel.

So Advance has cut its overhead and reduced its delivery cycle, hoping to find a business formula that will allow it to survive with one foot in the newsprint world and one foot in the digital world. In the process it has reduced its reporting staff, constrained its reporting prowess, and tampered with its relationship with the community by reducing its community leadership role.

Newsprint readers in Portland have lost three days of local news delivery, and, unfortunately, since Advance is a private company and its financial results are held privately, there is no way to tell from the outside whether these distribution experiments can help their newsprint business.

Bottom-line, the community is getting a newspaper produced with fewer journalism resources, fewer days a week. The reduced Oregonian still has an important role in reflecting life in Portland back to its citizens, but it’s a more passive role since its newsprint edition is no longer landing on the community’s doorsteps seven days a week.

EB: If you were starting a newspaper today, what would it look like?

PS & SB: It would emphasize compelling stories (so people would read them) – of success and failure — about life in whatever community it served. It would try to tell the story of what it is like to live in our community. It would reflect the community’s priorities, it would attempt to offer a news agenda that reflects those priorities, and it would celebrate the positive aspects of that community’s life.

It would attempt to be “the first draft of history” about life in our town.

PS & SB: What motivates people to become journalists: Curiosity, a desire to tell stories, and a desire to make their communities better places to live.

What makes a good journalist: Honesty, empathy, curiosity, persistence, industry, ethical balance and the skill to tell a compelling story.

Why do people become journalists: A rabidly curious nature, a desire to tell stories and a concern for the well being of the world in which we live and the people who populate it.

EB: What’s next for WNN?

PS & SB: We’re going to take an extended look at Canada and see what newspapers are like there. Stay tuned.

*The title of the first edition was The Power and Purpose of Journalism: Journalists’ Epiphanies.