An Interview with Mike Madrid 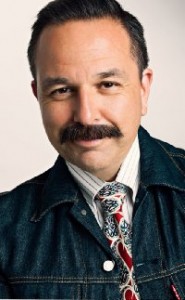 San Franciscan Mike Madrid is former advertising executive, the author of The Supergirls: Fashion, Feminism, Fantasy, and the History of Comic Book Heroines, which explored comic superheroines like wonder Woman, Batwoman, Elektra, Storm and the She-Hulk, and Madrid is a life-long comics fan and student of popular culture and was featured in the documentary “Wonder Women! The Untold Story of American Superheroines.” His latest book, Divas, Dames & Daredevils: Lost Heroines of Golden Age Comics, brings back heroines like Madame Strange, Lady Satan, Betty Bates–Lady at Law, Maureen Marine, Marga the Panther Woman, Spider Queen and Spider Widow, reproducing dozens of actual stories and adding his own insightful commentary. The book was recently released from Exterminating Angel Press.

Check out Mike Madrid’s work at heaven4heroes.com. And if you are in the Portland area on October 21, he’ll be appearing at Powell’s Books on Hawthorne at 7:30 PM. We recently sat down for an interview.

EB: I was fascinated to learn of some of these superheroines, many of whom are quite unusual: Pussy Katnip, for example, seems to live in an alternate reality of anthropomorphized animals. Mother Hubbard is an old woman who fights crime. Any ideas why the range of comics was so diverse?

MM: Most of the stories features in Divas, Dames & Daredevils come from the very early years of comic books, when creators were trying out different concepts to see what would attract readers. The medium was so new, so there was an opportunity to experiment with rather wild ideas like an old lady crime fighter. After World War II many of these more unique characters disappeared.

EB: What caused them to be replaced by much more timid characters in the 1960s?

MM: In the mid 50s there were allegations that comics were corrupting young readers. Comic book publishers developed the Comic Code Authority to clean up comics and make them more wholesome. Unfortunately in our society there is idea that sexuality and independence are intertwined. Adventurous female characters were somehow seen as too risqué. So, most 50s and 60s comic books presented readers with a message that a woman’s path in life was to be a wife and mother.

EB: How did you select the heroines and the stories to be included in Divas, Dames, and Daredevils?

MM: I tried to choose strong, unique heroines that most modern comics fans probably wouldn’t have ever heard of. I also wanted to feature female heroes that were different from what we’ve seen in comics over the past 50 years. Many of these women are surprisingly progressive, and that’s something I think a modern audience will find interesting.

EB: Do you see some of these heroines being the antecedents of modern-day heroes and heroines—Spiderman, for example?

MM: Some of the heroines I feature in the book are certainly similar to characters that followed in later years. The Spider Queen wears bracelets that shoot webs much like Spider-Man would use twenty years later. Marga the Panther Woman has razor sharp claws like Wolverine. Sadly the independent spirit that many of these early heroines had would not be seen in again in comics for three decades or more.

EB: How did you get interested in comics history and feminism?

MM: I loved comic books as a kid, and I wanted to learn as much as I could about them. That led me to start checking out books on comic history from my local library. This was in the early 70s, when Women’s Lib was making big headlines. I may not have known exactly what feminism was at a young age, but I know I didn’t understand why women in comics were not allowed to be as strong as men.

EB: It seems to me, anecdotally at least, that more women and girls are reading and creating comics today than when I was growing up. What do you think? 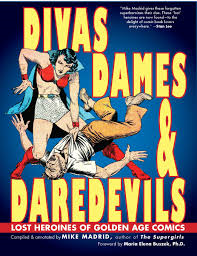 EB: If you were going to invent a superheroine, who would she be?

MM: I don’t have a specific idea of what powers she would have, but as far as personality she would be a woman who was smart, fearless, and had a good sense of humor. For me that’s a winning combination.

EB: What’s your next project?

MM: I’m interested in doing a companion book to Divas, Dames & Daredevils focusing on evil characters. And we’re looking at coming out with some eBook collections of more stories of these early comic book heroines from Exterminating Angel Press.

EB: Some of the artists were women themselves: Barbara Hall, Fran Hopper, and Claire Moe—what have you learned about them?

MM: There were a number of female artists working during 1940s. At that time there were more opportunities for these women because many male artists were fighting in WWII. Unfortunately those opportunities dried up when the men returned home. My friend Trina Robbins is the expert on women artists in comic books. Anyone interested in learning more on this subject should check her book Pretty In Ink: North American Women Cartoonists 1896-2013.

EB: What are the best research sources for someone interested in comics history?

MM: There is a wealth of information on comic book history available now, from books and websites to documentary films and college courses. Anyone interested in the subject just needs to pick a place to start. Invariably that will lead to more information sources, which is part of the fun.

EB: What should the history of comics do, in your opinion?

MM: A good comic book history should give the reader information, but also inspire that reader to want to learn more. That is what the books that I read growing up did for me. I also think a good history should look beyond comics to see how cultural factors shaped the medium throughout various eras.

EB: You are also the creative director at Exterminating Angel Press. What does that involve?

MM: I’m responsible for the visual design and image of the Exterminating Angel Press books. It’s been a fun creative journey for me developing and evolving the look of the press over the past four years.

EB: Thanks for talking with us?

MM: It’s been my pleasure. Thank you.