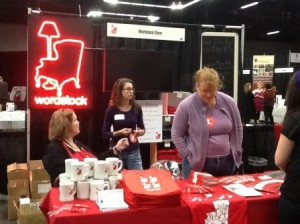 WORDSTOCK—Portland’s Festival of Words–is about stories and books and writing. I’ve never been able to break away before, but this term’s sabbatical allowed me to drive up to Portland to take in the readings, panels, workshops, and hundred or so exhibits by authors, publishers, cultural non-profits and businesses. I was able to catch up with the folks at Literary Arts, the Friends of William Stafford, Oregon Humanities, Fishtrap, the Oregon Cultural Trust, and the Northwest Writers and Publishers Association. 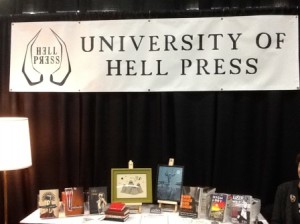 Our friends at Indigo Editing, who sponsor the Sledgehammer Writing contest, highlighted some of the authors they’ve worked with. And there was a slew of MFA programs: the University of Oregon, OSU, OSU–Cascades, Pacific University, Portland State and more. Presses were there: Copper Canyon, OSU, Black Heron, Chin Music Press, Ooligan Press, Oak Trees Press, Tin House, Nestucca Spit Press, and The University of Hell Press (Who knew?) A few east coasters even made the trek: MIT Press and the New School and the New York Times showed up. 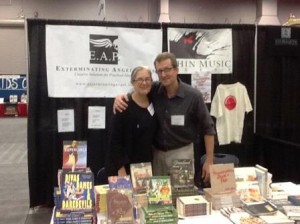 Ashland was represented by Tod Davies’s Exterminating Angel Press and Michel Holstein’s Madrona Press (complete with bookbot). The publishers were doing a brisk business, selling books, consulting with writers, and checking out the industry trends. The author booths looked a little lonelier, but I got some great ideas on booth logistics and for books I want to read, like Breakfast: A History by Heather Arndt Anderson.

Besides catching up with Oregon publishers, I went to panels on humor in writing (why not), historical detail, audiobooks, and magazine writing, and heard as many readings and Q&A’s as I could fit in, including ones from T. C. Boyle, Nicholson Baker, the Portland State duo of Paul Collins and Diana Abu-Jabar, the always hilarious Chelsea Cain, Eugene’s Barbara Corrado Pope (author of The Missing Italian Girl), Jacob Tomsky (Heads and Beds), and Peter Ames Carlin (Bruce). 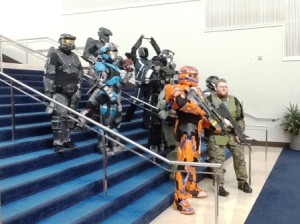 The convention center was also hosting the Portland Retro Gaming Expo, which I initially walked into by mistake. My first thought was that Wordstock was really going to be weird. Oh, and the Portland Marathoners were out and about too, as well as cheesemakers at The Wedge, the Hops Festival, and the Greek Festival.

The next Wordstock will be in a new venue and date—at Portland State University (rather than the Oregon Convention Center) and in spring of 2015, skipping 2014 altogether. 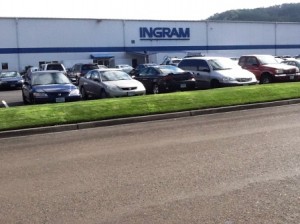 En route to Wordstock, we also stopped off for a tour of Igram Books Distributors, courtesy of Robin Conrad. Wow. Ingram handles distribution for some 300,000 book titles in the west and in housed in a two-story warehouse/shipping facility about the size of a couple of COSTCOs. We saw pallets and pallets full of books, staff adding library checkout info, folks finding, sorting, packing, shrink wrapping, boxing, and even a station for gift wrapped drop shipments for Amazon and others. Ingram is the largest wholesale distrubtor of trade books in the world and the Roseburg facilty is a major part of that. It’s a great Oregon business.