AN INTERVIEW WITH DAVID CHURCHMAN

David Churchman has been an infantry lieutenant, social worker, high school teacher, research associate at University of Southern California, and program officer at the National Science Foundation. He was a professor at California State University for 27 years where he held a dual appointment as Professor in the Humanities and as Chairman of Behavioral Science. In the latter capacity, he and two colleagues initiated one of the first graduate degrees in the country in Conflict Management in 1987. He received his bachelor’s and master’s degrees from the University of Michigan and his doctorate from UCLA.

David taught in Morocco, has been a Fulbright Scholar in Cyprus and Ukraine and a Malone Scholar in Saudi Arabia, and has conducted research on zoo visitors in Australia and Singapore. He is the author or co-author of over 150 publications, including Negotiation: Process, Tactics, Theory and Developing Graduate Theses and Projects in the Humanities. 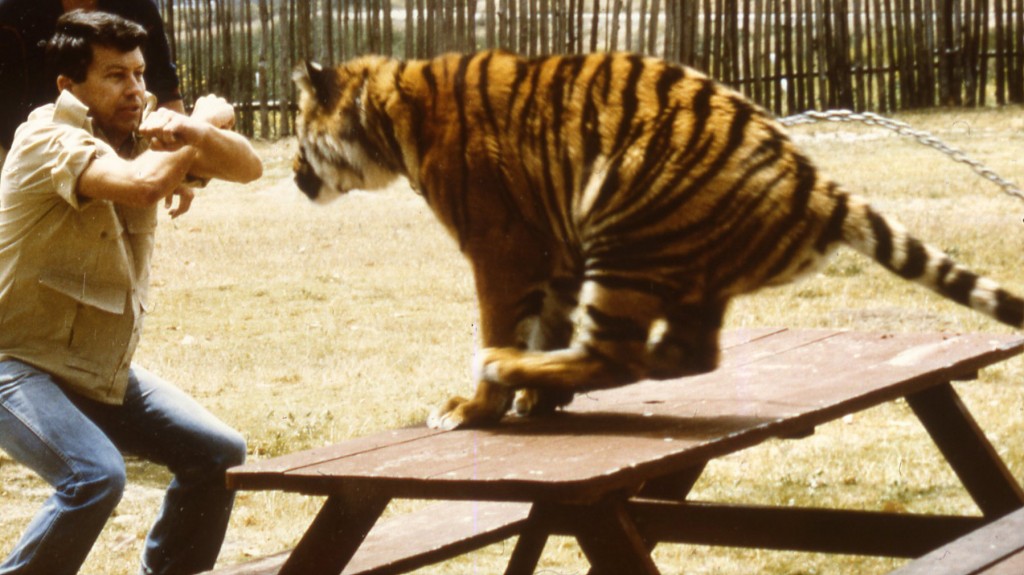 He is also a moderately experienced wild animal trainer who worked primarily with big cats, and is the co-founder of Wildlife on Wheels or WOW, a live animal environmental education program that was reaching some 100,000 Los Angeles basin children each year. David Churchman lives in Ashland.

The second edition of his book Why We Fight: The Origins, Nature, and Management of Human Conflict has just been released by University Press of America.

EB: How did you get interested in conflict as a topic?

DC: A mildly complicated story. My main appointment at Cal State was in graduate behavioral sciences. Whenever people asked what that was, we answered “whatever we want.” I came back from a year at National Science Foundation in Fall 1979 with the idea for a single course in negotiation. It proved so popular across so many majors that my very astute colleague David Nasatir suggested that if we had more than one course we had the core for an MA. Discussion that a colleague, Marilyn Garber from History but also a lawyer, soon joined led to proposing an MA degree in Conflict Management in 1982 in which students chose family, environmental, organizational, and international conflict as a specialty. A three year approval process followed, with implementation delayed one more year by my sabbatical. When we did get going, my assignments were the negotiation course and a new one in “conflict theory” without much idea of what it meant.

EB: You describe conflict at some half-dozen “levels” from interpersonal to inter-state and draw on a very wide range of academic disciplines. What motivated that choice of exposition?

DC: When I decided to write a book on conflict theory, I considered three possible organizing schemes. The first, by type of theory, seemed to be too abstract and pedantic–and besides James Schellenberg had already done it successfully. The second possibility was by traditional academic disciplines, but each one had so much to contribute to so many different types of conflict that a book so arranged would become something of a scavenger hunt for the student primarily interested in some specific type of conflict. A substantial number of conflict theory courses seem to rest almost entirely on the major discipline of the professor, with occasional brief forays into one or two other disciplines. This is much too narrow an approach for a field like conflict study. The third possibility recognized that most people are interested in a few specific types of conflict depending on their career goals—future marriage and family therapists in gender differences in communication rather than, say, geostrategic concerns that that might interest aspiring diplomats, while both might be interested in how culture affects conflict. From these ruminations, here more coherent than the actual process, arranging the book by “level” of conflict but explaining each in multidisciplinary fashion seemed to me the most useful approach. Not that I think the proposed levels or the academic disciplines that I draw on are definitive or complete.

EB: There seems to be quite a lot about critical thinking. What was your goal in the book? 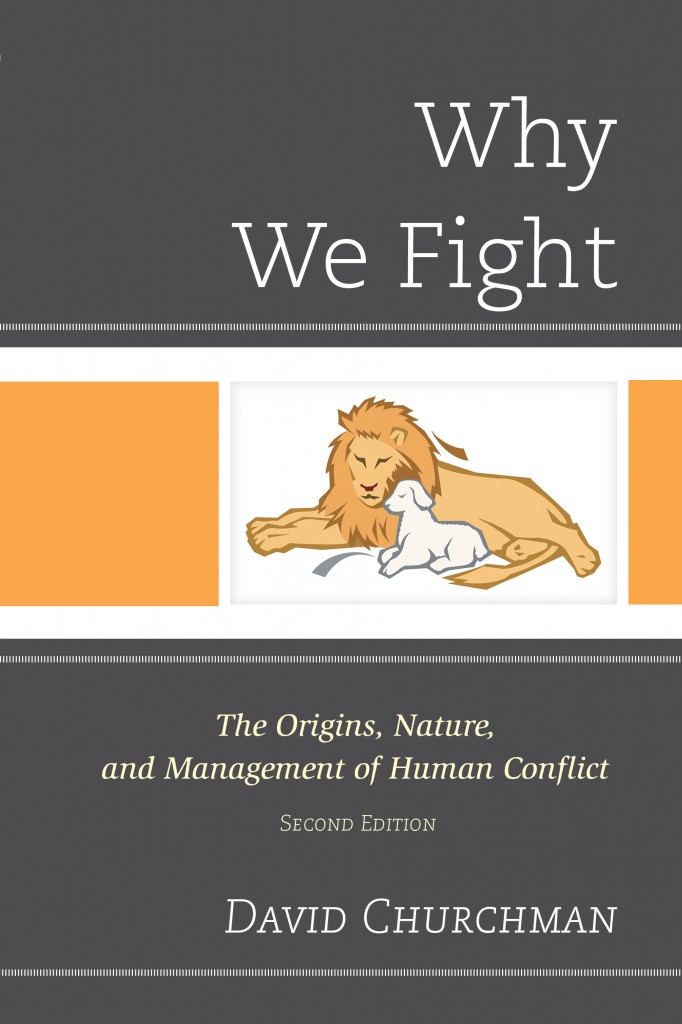 DC: Educators hear a lot about the importance of teaching students to “think” rather than simply to learn facts. But, this often comes down to telling students that all opinions are equally valid. Balderdash! To take an extreme case, Hitler’s opinion on race was not as good as that of Martin Luther King. Critical thinking requires evaluating evidence, distinguishing fact from opinion, determining where cause and effect are established. We need to give everyone a comprehensive, systematic, and objective approach to judging whether theories increase understanding, help us make better decisions or develop better methods for managing conflicts, and help us identify attempts to impose social or political agendas under the guise of science. I discuss six possible criteria in the book for judging anything we are going to call a scientific theory: it should be empirical, falsifiable, generalizable, logical, parsimonious, and useful. There is nothing new here—parsimony for example goes back at least to the fourteenth century. Furthermore, the six are useful for judging all ideas, not just conflict theories.

EB: I notice that you talk about conflict management, not conflict resolution. Can you elaborate on the difference?

DC: “Resolution” implies we can completely solve all of our conflicts all of the time, and I do not believe that we can. “Management” implies a more modest and I think realistic goal without denying that resolution sometimes is possible. I prefer the more modest term and more realistic goal.

EB: This is the second edition of Why We Fight and you’ve clearly been thinking about this for a long time. How has your thinking evolved?

DC: As best I can remember, when I agreed to teach a course in “conflict theory,” I thought primarily as a historian influenced by the combination of army service and a doctorate in applied statistics and research design. The program that I chaired included the department of Marriage and Family Therapy, an obvious expansion. There had to be something in between conflict between nations and conflict within families, which led quickly to identifying all sorts of other “levels” of conflict. Serving as the campus lobbyist for our faculty union led to thinking about labor-management conflict. A short stint at Department of State helping develop the US position on the Law of the Sea while I was at NSF and the negotiations to get the Conflict Management degree itself designed and approved got me thinking of managing disputes between different parts of an organization. Starting a wildlife education program with a former graduate student led to thinking about environmental disputes rich in political and economic issues. At some point, I realized that ideas were a source of conflict and turned to the few courses I had in European intellectual history as a starting point. That and the arguments about Vietnam and the Gulf War led to recognition of the need to consider moral aspects of conflict. And so it went. In other words, the evolution has been unplanned and serendipitous. If anything, I am much less sure of anything than when I began this journey about thirty years ago.

DC: I doubt it, at least in the real world and probably not even in literature, which would make for a pretty dull plot. As I say in the chapter on the search for peace, the lack of war may be a necessary condition for peace, but it is not sufficient. Following up on your point about critical thinking, it is a negative definition. It says what a thing is not rather than what it is, so is inadequate. My saying that you do not speak Mongolian does not tell anyone what languages you do speak. Rather, building on the remarks of Ralph Bunche in accepting the Nobel Prize, positive peace requires well-being, cooperation, freedom, justice, respect for human rights, and non-violent means of managing disputes. That is the goal. Sometimes our methods succeed, perhaps temporarily. Sometimes they fail.

EB: Of all the approaches you consider do you have a favorite, or one that seems to work best?

DC: I am not sure “favorite” is the right word but there are three theories that I think have the greatest potential for coalescing into a single coherent one. The first focuses on how important satisfactory resolution and how important the relationship with the opponent is to each party on each issue. Together, they predict which of five strategies each party will follow: collaborate, compete, compromise, surrender, or withdraw. The second analyzes a conflict in terms of what may be lost or gained at what level of risk to identify the most rational course of action for a particular party. The third requires preferentially ranking every possible course of action from the perspective of each party to the conflict, and analyzes these “preference vectors” to identify the one that is most likely to remain stable once agreed to. They are much too elaborate to explain here. Readers will have to buy the book.

EB: Who should read your book? Do you have a particular audience in mind?

DC: The main audiences that I have in mind are professors and students in the proliferating degree programs in conflict management and peace studies. I hope to provoke debate among them as to which theories and methods are good and even whether conflict theory is tenable at all given human ability to adapt and manipulate. I hope that parts of the book at least will be of some use to individuals involved in the particular types of conflicts—as evidenced by the endorsement of it by one US Congressman and one senior businessman.