An Interview with Siobhan Kelly 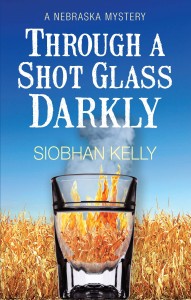 Siobhan Kelly’s novel Through a Shot Glass, Darkly is about a Jersey girl who buys a tavern in the small mid-western college town, fictional Sherman, Nebraska. She makes some friends, learns the culture, when suddenly one of her customers is murdered. It’s up to Alex Fitzpatrick to figure out who the killer is and figure out what’s going on in Sherman.

Siobhan Kelly grew up in New Jersey and taught for thirteen years as a college professor in northeast Nebraska, where she also wrote a food column for the Norfolk Daily News. Today she lives at the Jersey Shore with her partner and three demanding cats, where she is at work on a sequel to Shot Glass.

SK: Both! And amusement. She’s like me, when I moved to Nebraska to teach at a state college. Rural Nebraska really is a different world from the East Coast: much slower-paced, quiet, very conservative. It was culture shock. But whereas my social universe was the “gown” part of town, Alex owns a pub and gets immersed in the “town” part of Sherman. She’s kind of a social anthropologist, standing behind the bar. But it’s not the total shock to her that it was to me, because she has family there and has been out on visits. Of course, living there and owning a business is another story.

EB: Some of the differences that pop up in the book are bigger, like the roles of men and women and religion. The book has a social message but also a mystery—which of those did you find driving the story more? Or can you even tell?

SK: I really can’t separate them because the social stuff is so much a part of the mystery. The best mystery writers today weave social observation and commentary into their mystery plots, and I tried to do that in Shot Glass. Sherman is a town and a culture that doesn’t love change—at least not for the sake of change. And some people seem willing to kill, to stop change.

EB: You burn up a bookstore in the novel! Aren’t you afraid that readers will hate you for that?

SK: Yes! And it was painful to do it. But that was the image that started the novel for me and I built the story around it. I also kill off Alex’s first friend in Sherman and she’s grieving as she investigates. I really wanted to ramp up the stakes for Alex, and for the reader. It bothers me that in so many mysteries, the victim is just kind of a vehicle for the story and the grief happens offstage. Alex is gutted. Then she gets pissed. And the cultural stuff she’s been amused or mystified by becomes material she must decode, to unravel the mystery and get justice for her friend.

EB: I enjoyed the way you used the tavern as a place for people to congregate. You also seem to know a lot about running a tavern. How do you come by that?

SK: A liberal arts degree, of course! No wait, several. That post-college job in publishing never materialized so I started waitressing, and I did that, on and off, and a little bartending, all through grad school. I enjoyed it: the energy, the craziness, the different kind of people you met. And it was a nice contrast to the academic world.

EB: The title adapts a Biblical quote, which was also a Bergman film. Can you elaborate on its significance?

SK: There was a Bergman film with this title?? The quote from Corinthians is about not seeing things clearly. That’s Alex’s challenge, because she’s trying to understand this culture but can only see it through the fog of her East-coast worldview. And she’s a bartender so the glass became a shot glass.

SK: Revising. Over and over. I sent various drafts to agents, contests, small presses. Lots of rejections along the way, but with some of them came positive feedback and advice about how to make it better. So I’d go back and revise again. Shot Glass could have become the proverbial first-novel-in-a-drawer but I was too stubborn to let it die. It’s come a long way. My biggest surprise? When a character started doing things on his own! I’d heard of this phenomenon but never quite believed it. It was amazing. Then other characters started developing their own minds, too.

EB: Your main character likes to read Agatha Christie. Is Alex what Miss Marple would be like if she were young, gay, and ran a bar?

SK: LOL! Now there’s an image. I can’t imagine Miss Marple dispensing anything but tea, though.

EB: Seriously though, your protagonist is gay but her sexual preference doesn’t seem to play a big role in this story. Was that intentional?

SK: I’ve had readers say that before and it surprised me, so no, it wasn’t intentional. But I guess it’s just a reflection of how I live my life. I’m gay and not closeted but I also don’t make a big deal of it. And I think more and more people are living their lives that way.

EB: Who would play Alex if there was a movie?

SK: What a fun question. Hmmm. How about Helen Mirren? No, I’m just saying that because she’s my favorite. How about Rachel Maddow? She’s got that kind of lesbian-girl-nextdoor vibe that I like to think Alex has. But Alex isn’t as sexy as Rachel, and not quite as smart! As for Alex’s love interest, Chris, that’s a different story…

EB: Do you have a sequel planned? Will we see more of Sherman, Nebraska?

SK: Yes, and this time you’ll see more of the “gown” part of Sherman: the state college. So it’s partly an academic mystery this time. Alex has professor customers in Shot Glass but I develop them further in the sequel, and draw on my experience as a professor. Stay tuned for satire.

EB: I think it would be fun to have Alex and some of her Nebraska friends visit New Jersey. How about it?

SK: Love it! I’m picturing Alex, Kathy, and Chris on a road trip. Of course, once in New Jersey, Alex would have to do all the driving!