An Interview with Clive Rosengren 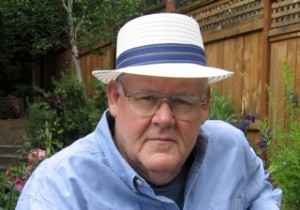 Clive Rosengren has been an actor for the better part of the past forty years, eighteen of them pounding the same streets as private eye Eddie Collins does in his novel Murder Unscripted. Clive’s movie credits include Ed Wood, Soapdish and Bugsy. Among his television credits are Seinfeld and Cheers, where he played the only person to throw Sam Malone out of his own bar.

He currently lives in Ashland, Oregon, amidst an extensive movie and crime fiction library. Murder Unscripted is his debut novel.

EB: You spent much of your career as an actor. How did you make the transition from actor to writer? How is writing like acting?

CR: When I was still living in LA, an actor friend and myself joined an ongoing screenwriting workshop, out of which ultimately came Murder Unscripted. Acting is essentially an art form that relies on “community”–other actors, writers, directors, etc., while writing is primarily a solitary discipline. But since I rely on reading my work aloud to determine whether or not it sounds right, I suspect there is some sort of “performance” basis to it.

EB: Where did you get the idea for Murder Unscripted? Is it based on a true story?

CR: As I mentioned, Murder Unscripted came out a screenwriting workshop. I think somewhere way back in the development process, I had an idea of a serial killer committing murders following the examples of Shakespeare’s great tragedies. Obviously, the plot veered off from that, but back there somewhere was that germ of an idea. The plot, to my knowledge, is not based on a true story.

EB: Your character Eddie Collins is an actor/private eye. I guess many actors have other jobs. Are there some who are private eyes?

CR: When I was still making the audition rounds in Los Angeles, I seem to remember encountering an actor who worked as a private eye. I don’t know that the PI sideline is that prevalent, but certainly seems to me a worthy “day job,” since the hours are pretty flexible, leaving one open to still pursuing the acting bug.

EB: What is your writing life like? Do you work with a writing group? Slave away alone? Write all day? Do you wear the porkpie hat when you write?

CR: I do work with a writing group, a group of four other writers that is informally dubbed “Monday Mayhem.” I don’t write all day; in fact, my writing habits leave a lot to be desired. I don’t wear the porkpie hat when writing, but now that you mention it, perhaps the Muse can be found underneath it. I shall have to try that!

EB: Do you have a next project? I know that you’ve also been involved in writing screenplays.

CR: I’m at work on a second Eddie Collins story, tentatively titled Red Desert. I have also signed a contract to do the narration for Murder Unscripted for Blackstone Audio. It is scheduled to be released in January of 2013.

EB: I know that you have an extensive collection of movies and crime fiction. What are some of your favorites? What do your read?

CR: My hands-down favorite film is Chinatown, closely followed by L.A. Confidential. The Godfather trilogy is high on my list, along with almost anything starring Meryl Streep, who I believe is the finest screen actress of her generation, maybe even of any generation. I have a handful of crime writers I read religiously: Michael Connelly, Robert Crais, James Lee Burke, Nevada Barr, Craig Johnson, T. Jefferson Parker, John Sandford, and the list goes on.

EB: Any advice for first time authors out there? What have you learned?

CR: Read voraciously, not necessarily in the particular genre you wish to dwell. Make the best effort you can to write every day, anything, even it it’s in your journal. I have learned that persistence pays off, that you must trust your instincts, and write what you want to write, not just because some form or genre is “hot.” Polonius hit the nail on the head when he said, “…to thine ownself be true.”