Meg Null, or Like…Brag: an Exploration of Language in M.T. Anderson’s Feed — A guest post by Anne Bryan

Feed: a. an internet chip implanted in the brain at birth. b. a science-fiction novel by M. T. Anderson that addresses the repercussions of implanting internal feeds. His futuristic saga recounts the tale of Titus, an ordinary hip teenager, who meets a counterculture, innovative, feed-resisting girl named Violet. In this American dystopia of consumerism, corporation, and technology-inspired globalization (or rather, solar system-ization), language has adjusted to complement the status quo. In addition to advanced technology and startling societal values, language is one of the primary ways M.T. Anderson shapes this world. He alludes to this important aspect in the book cover biography, explaining that for inspiration: “I listened to cell phone conversations in malls. People tend to shout. Where else could you get lines like ‘Dude, the truffle is totally undervalued?” Beyond raising cultural questions, Feed highlights interesting characteristics of language; though fictional, it reveals the continual fluctuation, and immediacy of language. 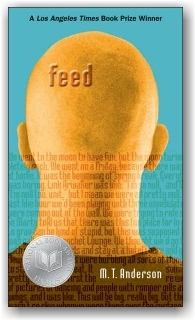 Narrated by Titus, the novel unfolds in the current teenage vernacular, not unlike high school-speak of today. Phrases such as “like whatev” (10) and “it’s sometimes like—whoa, really—whoa” (82) embellish the dialogue. When Titus asks Violet to help test-drive his new upcar, he exclaims, “both she and me were really excited by the whole thing” (99). This kind of informal language usage, especially in the written form, makes persnickety English teachers, grammarians, and a large portion of the general public, wince. However, linguists are adamant in the assertion that language change is natural, normal, and not the exasperating process naysayers shake their heads over.

John McWhorter in his The Word on the Street: Fact and Fiction about American English feels the general populace is not aware of the descriptive, rather than prescriptive attitude linguists hold towards language change. He believes people are concerned about speech ‘errors’ because overall language change, and acceptance, “can be difficult to perceive within the context and span of a single lifetime… [and are] large-scale phenomena that are barely perceptible within our daily experience. They only become clear through comparison, inductions, and trips into the past” (2). To his statement, I add that language evolution can also be demonstrated by a trip into a perceived future, like the one in the novel. Perhaps these subtle language differences can best be observed in Feed by a closer look at the lexicon.

In the linguistic tradition of A Clockwork Orange (with perhaps a satirical wink), Anderson fills with Feed with initially unfamiliar terminology or word uses. Anthony Burgess stated that as A Clockwork Orange was “supposed to be about brainwashing, it was appropriate that the text itself should be a brainwashing device,” and he initially did not want to include a glossary so that it would be “an exercise in linguistic programming, with the exoticisms gradually clarified by context” (Craik 51). Unlike A Clockwork Orange, Feed actually was published without a glossary, and readers can easily deduce the meaning from the larger context.

One can also discern the meaning and function of unfamiliar words with knowledge of semantics, syntax, and word formation. Most of the noteworthy lexicon is slang, and while there are many ways to define slang, or provide a criteria, I turn to the words of Antonio Lillo, from his examination of Covert Puns as a Source of Slang Words in English: “Slang is the one domain of the lexicon where the speaker, freed from the restraining inﬂuence of the standard, plays around with all the potentialities of word-formation, thereby imbuing communication with creative zest and a sense of humour.” He goes on to clarify that only “rarely does it yield new forms, for more often than not the creativity of slang lies precisely in the attachment of new meanings to old lexical materials” (319). Null is a word that displays this idea.

Current speakers are familiar with the word null, its connotation covering the realm of empty, vacant, possessing no information. In Feed, null means bored, or boring. It has undergone a form of pejoration, moving from stating the fact of emptiness, to indicating that the lack of information necessarily implies a lack in entertainment value. At the onset of the story, Titus and his buddies are making plans, and we are informed, “everything at home was boring. Link Arwalker was like, ‘I’m so null,’ and Marty was all, ‘I’m null too, unit,’ but I mean, we were all pretty null” (3).

Even if we were not given such obvious implications, with the word boring preceding their declarations, we could still tell several things about the word. For example, on what was portrayed as a fruitless shopping adventure, one of the guys “ordered this really null shirt. He said it was so null it was like ordering nothing” (24). Null modifies the word shirt, which is a noun, so we glean that null must be an adjective. With this information, combined with the lack of enthusiasm towards the shopping trip, and the comparing of the shirt to ‘buying nothing,’ it would be easy to arrive at the appropriate meaning of null. Titus also uses the term when he preps for spring break, admitting, “I didn’t want to be null for the unettes on the moon, at the hotel, if any of them were youch,” (4).

The final term in the sentence is also illustrative of the language of Feed. Youch is a blend of the two words yikes and ouch, and is used nowadays as an exclamation, in situations of pain, or jokingly, after a verbal insult. Pain is a reaction. Youch, in this newer situation, is still a reaction, though it has experienced amelioration, and is used only by the male characters in the story to describe attractive females. It replaces the adjective hot of this era. As an example of language change, each decade has words to describe levels of attractiveness. Note the 1910’s Peacherino, 1920’s Biscuit, 1940’s Rare Dish (Ostler 15, 30, 87), and in Feed we have the futuristic Youch. When Titus first meets Violet, he describes her as “meg youch” (16).

In addition to youch, he uses the quantifier meg, which is dominant in the language of the novel. This is a clipping of the word mega (large/extreme) we are used to, and has become a primary degree word in this futuristic world. Titus continually says things like, “that was meg yesterday” (64), and she was “meg blushing” (50), which was “meg pretty” (118), and became “this whole meg thing” (137). Throughout the entire book, the myriad uses of meg could be replaced with even, big, totally, so, too, very, rather, quite, entirely, and especially. The use of the word meg is not limited to Titus and his friends, but is frequently heard from the adults, such as parents and medical (technical) personal.

Other words are not as generationally shared. In fact, several of Anderson’s terms aptly show how language shifts generationally. The word unit illustrates this concept well. Like the current day dude (which is still surprisingly prevalent, considering how many decades it has been around), unit can address or allude to someone specifically—“Unit! Hey, Unit!’ (9)—or can be used a generic expletive, as in “Whoa, unit! The moon!” (4). Interestingly, where Titus uses the word unit, his father still utilizes the antiquated equivalent, with phrases like: “Dude…Dude, this is some way bad shit” (46) and “Dude, I just bought you an upcar, and you’re being a brat” (105). Dude is being phased out with the father’s generation, and unit is being phased in by the next. Violet’s father, on the other hand, is an anomaly. He illustrates a far longer epoch of language evolution. Functioning with an outdated feed that exists outside of his brain, he is a professor at a university and teaches dead languages. These programming languages—FORTRAN and BASIC—have long been extinct, replaced by more advanced programming for internal feeds.

Another interesting element of generational change is seen in what Robert Moore calls basic slang. In an article titled We’re Cool, Mom and Dad are Swell: Basic Slang and Generational Shifts in Values, he explains that basic slang differs from the normal concept of slang, in that it is not transitory—sometimes lasting several decades—and is pervasively used by many sectors as a term of approval. He tracks the word swell and its replacement, cool. While both have a long history, the dominating slang usage of both signals a generational shift. Swell was a 1920s rejection of lingering Victorian values, while cool became a marker of the distance and disconnect youth felt towards adult culture, in the decades following the Second World War. “These linguistic shifts,” he explains, “are indicative of positively valued emotional attitudes that can rise or fall rather abruptly and do so in the hands of those youthful cohorts that decisively reject some of their parents’ values” (83).

An interesting follow-up, Peter Petrucci and Michael Head write that in Australia, sweet has become a frequent synonym for cool, though it has not replaced cool. I know from the conversations of my 14-year-old brother and his friends that sweet is also used extensively, at least among youth of Northern California. It will be interesting to see if it continues to grow as a trend. In Feed, the word brag has succeeded swell, cool, sweet (and perhaps others still unknown to us) as the pervasive slang for approval. Since this is fiction, and we know only the outcome of linguistic change, we can only surmise the ascent of brag’s established popularity, and its larger social connotation. Regardless, it is a marker of linguistic change.

Beyond generational change, language must change to reflect society. Thus every new advance in technology spurs an accompanying change in everyday language. When the automobile arrived on the scene, there was in influx of new vocabulary, from the now obscure duster (a garment worn to protect clothing), motoring goggles s (worn to protect the eyes), and rumble seat (a fold out trunk designed for luggage, but used as a seat), to the still in use gaselene (now spelled gasoline), and running board (Ostler 11-12). Auto became a morpheme that attached to dozens of existing words to adapt to the new automobile culture. Conversely, the society in Feed relies on upcars that drive in or on uptubes —compound words that use the morpheme ‘up’ with the traditionally understood words car and tube, to update (pun intended) the meaning, and account for vertical as well as horizontal travel. Another highly significant language decorator involves the advent of the computer.

We live in a world infused with such morphemes as cyber, net, e-, and web. One could say, “I e-mailed an online friend from one of my favorite networks, and gave her a link to a website about cyberliteracy,” and be understood. These kind of words have been phased out by the time we reach the ambiguous date of Feed, and have been replaced with words like “feedcast” (21), “feedflinging” (27), and “Feed-sim”(99). Fugue and malfunction are words for scrambled states of feed (both accidently, like technical failure, and self-induced, like substance abuse). Another feed-related term is m-chat, presumably shorthand for mind-chat, which doesn’t require vocal chords or lip movement. It is interesting to note how the word chat transitioned from meaning oral communication to written, as on external computers, to finally, a form of sensory verbal communication on internal feeds.

Whether m-chatting or talking, the language of Feed is exemplary of the manifold ways language changes. The lexicon of Feed reflects generational differences, and the ever-evolving relationship between language and society, both related to value systems, and technology. With its changeability, fluctuation, and non-static nature, language is anything but null. Language is brag—meg brag.

Edwin Battistella’s latest book Dangerous Crooked Scoundrels was released by Oxford University Press in March of 2020.
View all posts by Ed Battistella →
This entry was posted in Ideas and Opinions, Language, What People Are Reading. Bookmark the permalink.