In today’s market there is a wealth of young adult writers – all of whom strive for different goals. They each have the opportunity to change the face of the genre with every new book release, but not all of them go about it the same way. One author will put together a novel and release it onto the market, letting it forge its own name without much guidance – but the results differ. Sometimes books like this hit the jackpot and make it big, like Stephenie Meyer’s Twilight. Others flop without much notice. But some authors can make a splash by putting in a bit more effort. With the use of new media platforms, an author can connect with fans more easily than ever. John Green is an example of an author who goes the extra mile to communicate with his fans. 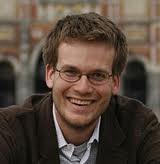 Green has written several novels for young adults – some of which are even used in classrooms. His second book, An Abundance of Katherines, details the journey of Colin, a once-time child prodigy who is struggling to come to terms with the fact that his mathematical skills are not advancing as quickly as he wants them to (and not to mention his recent breakup from a girl named Katherine). As the story evolves, Colin learns valuable lessons and comes to a greater understanding of himself, as well as the people around him. The themes and messages of the novel are realistic and meaningful, but Green’s various web platforms allow him to help his readers understand the text even more fully.

Green’s contact with his fans evolved when he and his brother, Hank, started their YouTube channel in early 2007. This platform did not begin with a large viewing, but as it grew its potential climbed steadily. While the channel is not always aimed towards literary interpretation, its educational value is undeniable; the brothers address current events, discuss little-known facts and even give kids dating advice. Their overall message to kids is, essentially: strive to be intelligent, passionate and caring individuals – and aside from that, just don’t forget to be awesome.

Well-known authors could immediately make a similar connection with fans, simply by creating and sharing videos – or even just blogging regularly. This would allow authors to dispel misconceptions related to their books, or to share interesting bits of knowledge. Authors would even be able to inspire their fans to organize events to support charities or conduct research studies – but the benefit of author-fan contact does not have to end there. It may seem that fans get all the benefit from author’s involvement, but social platforms also give authors the ability to alert their fans to book-tours. New, lesser-known authors can even attract new fans by putting themselves out there. In truth, the positive impact that authors can bring about by being more vocal is boundless; as new platforms emerge the ability for authors to reach out to their fans is becoming easier, and new opportunities arise every day.

Alyx Johnson is passionate about young adult literature, which helped
guide her to become an English Education student at Southern Oregon
University. She currently lives in Medford.