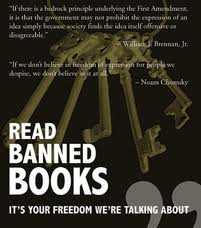 It’s banned book week, of course, and you know what to do.

New York Times’s critic Sam Anderson’s talk is coming up this Thursday at North Medford High. No banning Sam. It’s sponsored by the Jackson County Library Foundation and was featured in a nice article by John Darling in the Medford Mail Tribune and Ashland Daily Tidings.

Next Friday October 7, at 6 pm, the mystery writing team of Michael Sears and Stanley Trollip will be at Bookwagon (1652 Ashland Street). They collaborate as Michael Stanley (get it) to write a series of mysteries set in Botswanna. Michael Niemann, international economist, will introduce will talk about Botswana politics, trade and culture on Sunday October 2 at 2p at the Ashland Public Library.

Congratulations to Amy MacLennan whose chapbook The Fragile Day was recently released by Spire Press in New York. It should be available soon at Bloomsbury Books in Ashland.

And coming soon on Literary Ashland: a selection of our SPAM, Alyssa Zysett’s bookstore tour, and our Twitter strategy unveiled. Tell your friends to follow us.

Edwin Battistella’s latest book Dangerous Crooked Scoundrels was released by Oxford University Press in March of 2020.
View all posts by Ed Battistella →
This entry was posted in Literary Events in Southern Oregon. Bookmark the permalink.