Posted on September 3, 2011 by Ed Battistella

Anderson grew up in northern California and Oregon, where he narrowly escaped being named Elvis. He studied at SOU (where he wrote for the Siskiyou) and Louisiana State University and New York University. His work has appeared in New Orleans Times-Picayune, the Christian Science Monitor, the Oxford American, Slate, The American Scholar, Creative Nonfiction, on NPR, and in The Best Technology Writing 2010. Until recently moving to the New York Times Magazine, Anderson was the Critic at Large at New York Magazine. He tweets the best sentence he reads every day at twitter.com/shamblanderson. 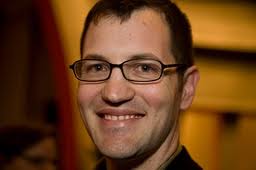 Anderson’s forte is book reviewing, and he takes it seriously, as a genre of engaging criticism. In 2004 he won the Best Essay Award from The American Scholar, for an essay on James Joyce, and in 2007, the National Book Critics Circle awarded him the Balakian Citation for Excellence in Reviewing.

Read Anderson’s January 2011, Times Book Review piece on “Translating the Code Into Everyday Language,” where he talks about the relationship of culture to time and text and argues that critics can no longer take readers for granted. Reviewing still matters, he explains, but it needs to be given more respect and self-respect. And that starts with writing. Well-written reviews have a vitality that equals their objects. Badly-written ones are “self-canceling.”

Anderson has trademarked the imitative review, criticism in the style of the book, and in addition has written on film, humor, rap, cryptography, and caves. He’s even managed to explain James Franco, or at least put him in perspective.

Here’s a link to the New York Magazine inventory of Sam Anderson’s articles. Read a few and then make your way to North Medford High on September 29 for his Southern Oregon Arts & Lectures talk. If he talks like he writes, you won’t regret it.