An Interview with Jim Gilkeson

Born and raised in Kansas, Jim Gilkeson studied languages in college in the 1960s, was a brother in an order of mystics, which took him to Europe. After leaving the order in the early 1980s, he studied energy healing with teachers in Germany and Denmark. Jim returned to the US, he worked for many years in Northern California at a hot springs retreat center. He and his partner, Diane Tegtmeier, live in Ashland, Oregon.

Gilkeson is the author of three books, A Pilgrim in Your Body: Energy Healing and Spiritual Process, Energy Healing: A Pathway to Inner Growth, and most recently Three Lost Worlds.  You can find more at his website.

Ed Battistella: I’m enjoying reading about your life. What are the Three Lost Words of your title?

Jim Gilkeson: Thank you, Ed. Your introduction makes me suddenly aware that all my books have long titles! The full title of this most recent one is Three Lost Worlds: A Memoir of Life Among Mystics, Healers, and Life-Artists.

It’s my story of “running off with the circus” in my early twenties, (a lot of us did that, of course), ending up under vows in a semi-monastic order of Christian mystics, in an apprenticeship in energy healing in northern Europe and, finally, working on the health services staff at a clothing-optional hot springs retreat center in Northern California. Those are the “three lost worlds,” because none of them exist anymore.

EB: How was writing a memoir different from the other books you’ve written?

JG: The first two books were my gloss on the art and craft of energy healing, and I wrote them mainly with my students in massage schools in mind. I was encouraged by the publisher of my first book to sprinkle a few stories in with the instruction, and that turned out one a good way to connect with the reader.

The memoir, on the other hand, is all story. I had to develop an eye for the narrative arcs in my own life. I would write and let my memory speak, and suddenly I would be sitting there with pieces of my life all over the page. It was then a process of assembling those fragments of my life into something whole. In a funny way, writing memoir strikes me as a form of digestion.

EB: Your earlier books were about energy healing. Can you unpack that for our readers? You described it as a “world of self-ordained practitioners.” 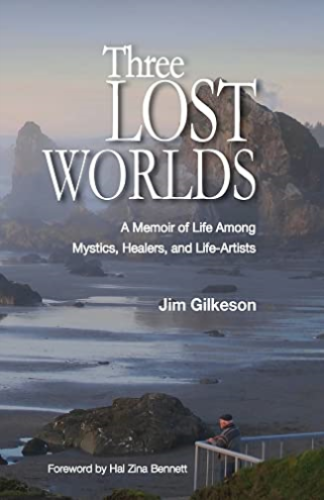 JG: Energy healing is a broad category of practices that use the human energy field therapeutically. Many people have heard of Polarity Therapy and Reiki, and those would be examples. Classes on various forms of energy healing are now standard fare in schools of massage and bodywork, but it hasn’t always been like that.

When I talk about “self-ordained practitioners” in my book, it harks back to a time before the proliferation of massage schools and standards and regulations for professional bodywork. At that time, a person who became proficient and confident in their skills in energy healing would just declare themselves ready and hang out their shingle.

In my case, I learned energy healing from my former wife and her teacher, Bob Moore, and these energy practices struck me as an adjunct to my meditation practice. At the time, it was all about meditation and spiritual growth. I knew nothing about hands-on healing practices. By and by, I had training in various forms of therapeutic bodywork. As I got more sure of what I was doing, I began blending energy healing with other bodywork disciplines.

EB: In Three Lost Worlds, you describe the years you spent with a group called The Holy Order of MANS in San Francisco in the 1970s. You mentioned that some people would describe it as a cult, but it didn’t seem that way to you.  How so?

JG: The cult question is an interesting one. The Holy Order of MANS was one of a myriad of “new age” spiritual groups that formed on the West Coast in the 1960s and ‘70s. What made it different from most of the spiritual movements back then was that it had strong elements of western Christian monasticism and roots in mystic traditions like those of the Rosicrucians.

I devote part of a chapter in Three Lost Worlds to the question of whether the Order was a cult or not. It’s a hairball and, to me, there’s no clearcut answer. The Order certainly had cultish features. We wore clothes that identified us, and there was a uniformity in the Order’s teachings and self-image, but you could also say the same things about Catholic monastic orders and the US military.

I was a member of the Order at the time of the Jonestown mass suicide in the late 1970s. There was a lot about that in the press and a huge uptick in general concern about cults. It was a pretty fraught issue. The Order did a lot to distance itself from all that. I remember at the time the director of the Order making a scholarly distinction between a “cult” and a “sect.” I think most people in the Order saw themselves in the latter category.

Here’s a weird thing: not long after all this, the Order made a, for me, baffling swerve from being a “new age” spiritual enclave to joining the Orthodox Church. This was in the early 1980s. In the process, of course, they had to renounce their “heretical” beliefs in reincarnation and other esoteric teachings. I left the Order in 1983, before all this took effect. Cult or not, I was glad to move on from the Order.

EB: I enjoyed hearing about Harbin Hot Springs, where I went once years ago.  What was that experience like?

JG: Like going into the Order and my apprenticeship in energy healing, it was a big turning point in my life to become part of the Harbin community. Harbin Hot Springs was the home of of Watsu, a form of aquatic bodywork. My partner Diane was a Watsu therapist at Harbin, and I came on board as a bodywork therapist at Harbin Health Services in 2001.

As with the Order, Harbin had its own quirky outside-the-mainstream culture, which I adapted to. Of course, people make a big deal out of the “clothing-optional” aspect of Harbin culture. It’s a sure-fire conversation piece with people who don’t live in that environment, but you get used to it quickly. Being on the bodywork staff and in and out of the pools all the time, you get used to being around a lot of naked people.

Harbin attracted colorful, interesting, creative people from all over the world, so I got to learn my craft on all kinds of bodies and people you don’t run into in Wichita. For me, Harbin was the place where I hit my stride in hands-on healing work. That’s where I developed my own hybrid of massage, craniosacral work, and energy healing and began to teach it.

When Harbin burned down in the wildfires of 2015, it was a huge loss. Workplace, community, it all went up in smoke. Our little cabin outside of Middletown didn’t burn, but we had to evacuate and, in many ways, start over. It’s what got us to Ashland.

EB: What’s next for you?  More books?

JG: I am finishing up a collection of short pieces, mostly from vignettes that were edited out of the memoir. The working title is Stopping the World on Kansas Highway 4.

In addition, I have a practice here in Ashland—craniosacral and subtle energy therapy, and I teach energy healing in a couple of massage schools.

JG: Thank you, Ed. It’s been a pleasure.