An Interview with Tea Krulos, author of American Madness

Tea Krulos is a freelance journalist and author from Milwaukee, WI. He writes about art and entertainment, lifestyle, and food/drink for publications like Milwaukee Magazine, Shepherd Express, and Milwaukee Record. Other publications he’s contributed to include Fortean Times, The Guardian, Boston Phoenix, Scandinavian Traveler, Doctor Who Magazine, and Pop Mythology. You can find his a weekly column, “Tea’s Weird Week,” on teakrulos.com.

His most recent book is American Madness: The Story of the Phantom Patriot and How Conspiracy Theories Hijacked American Consciousness (2020, Feral House).

Ed Battistella: American Madness is a bio of sorts of Richard McCaslin. Who was he?

Tea Krulos: Back in 2010, I was working on my first book, Heroes in the Night, which is about a subculture of people who adopt their own “Real-Life Superhero” persona. Richard had seen that I was working on the book and contacted me, saying he was one of these Real-Life Superheroes and called himself the “Phantom Patriot” and that he had been arrested in 2002 when he started a fire in a secret retreat in northern California called the Bohemian Grove. It quickly became clear that he was a hardcore conspiracy theorist. I was interested in his life story and how he got there and began a long process of interviewing and researching.

EB: What’s your goal in the book?

TK: I think the first thing that really appealed to me was that Richard’s story hadn’t been told and I was in a unique position to be the one to tell it. As time went on, though, I found there was a bigger picture to this story. I found that Richard wasn’t alone in his views and that some of his beliefs and inspirations were becoming more prevalent. When I first started working on this book, people like Richard were really fringe and isolated. Now you have big social movements like QAnon that follow these ideas.

EB: I wanted to ask about your earlier book Heroes in the Night. Is there a connection between what you call the real life superhero movement and conspiracy theories.

TK: Real-life Superheroes (or RLSH) are a really eclectic group of people that share the desire to invent superhero personas and do good in the world. Most of them aren’t into conspiracy theory, but a couple of them are willing to entertain the ideas. Richard had a tough time breaking into the RLSH community, at first most of them didn’t want to be associated with him because of his beliefs. Eventually he did make a few RLSH friends and joined them on some meet-ups. But he really was, as he himself described it, “the black sheep of the RLSH.”

EB: Is there a particular type of person who is attracted to conspiracy theories?

TK: I think a lot of people have conspiracies they believe in, they’re just usually much more small scale– a conspiracy against you at your workplace, for example. I think people that get in deeper are really looking for meaning and order in this crazy world. There’s some appeal in thinking that a satanic network of Illuminati or “Deep State” is causing everything bad to happen. The Internet has really caused the widespread of some of these ideas. I quote a study in my book that found that almost 100% of flat earthers got sucked into the idea via YouTube. In Richard’s case, and other stories I examined I found that conspiracy believers had gone through a rough time in their life and conspiracy kind of filled the void they were feeling, almost like taking solace in a religious faith. 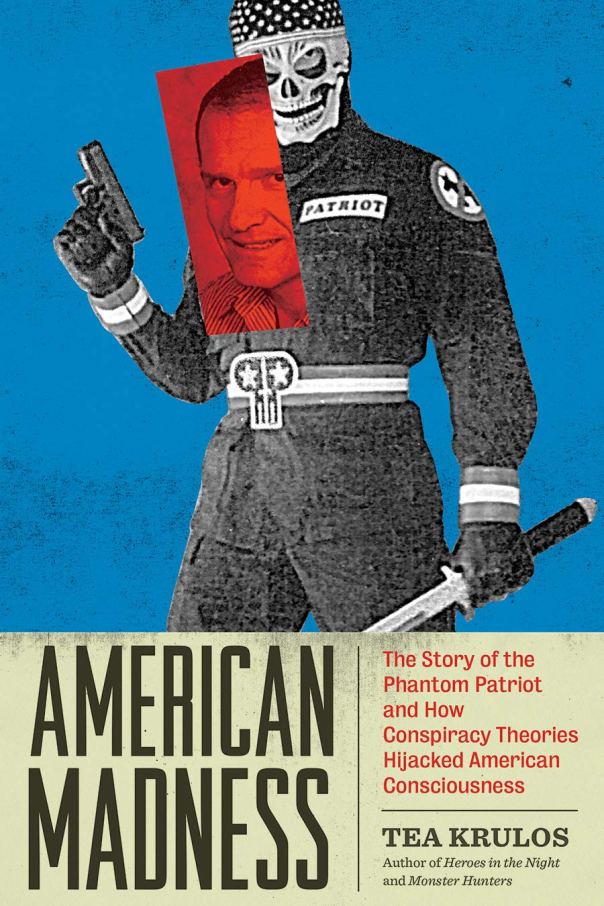 EB: You also talk about super conspiracies theories, where various conspiracies connect together, like Q-Anon.

TK: Yes, I think this is something that’s evolved. You used to find more theorists that had a conspiracy they focused on– “Assassinologists” are mostly interested in the JFK assassination. But most conspiracists now are super-conspiracists which means they’re likely to believe most conspiracy ideas they’re exposed to and believe that all of them are connected together, all perpetrated by this evil Deep State league.

EB: Is it possible to engage with someone who believes in conspiracies? What’s the best strategy?

TK: Sadly, it’s difficult to engage with someone after they make the conspiracy plunge. Almost anything you present to them– legit journalism or even photos or video will be dismissed as “fake news” or a “hoax.” It’s frustrating because how can you argue a point with someone like that? I think the best strategy is to not mock the person or get angry, but to listen and present why you think that they are wrong and point out the credibility issues with their sources. Hope for the best, but don’t expect them to budge in their thinking.

EB: Is the US more prone to conspiracy thinking that other countries or is this a world-wide phenomenon?

TK: It is world-wide. I just read a report about how QAnon has started to get a foothold in the UK, Germany, and other European countries. Other countries have long used conspiracy as a form of propaganda. That being said, conspiracy is very American. It’s gotten to be prevalent here, especially in this Trump era. From Bohemian Grove to Area 51 to Dealey Plaza, it’s part of our landscape.

EB: How do politicians respond to conspiracy theories? What should they be doing?

TK: Well, some conspiracy theorists are getting elected to office! Trump himself knows very well the power of using these theories as a weapon, whether it’s Birtherism, alleged voter fraud, or blaming his orange skin tone on energy efficient lightbulbs. The Trump effect has led to a number of QAnon inspired candidates to run– Marjorie Greene, a QAnon believer, is poised to win a seat in Congress this year and others look like they have a chance of winning, too.

That’s why I think it’s important to look at your local elections. It’s exhausting to keep up with all the misinformation, but I think media and politicians should be calling out Trump and other politicians spreading conspiracy every time. There is a war on reality about politics and the pandemic, and that should concern us all.

TK: Great talking with you, thank you!