I don’t enjoy most social media, but I will admit to spending time on Tumblr, a social media platform with a penchant for encouraging tight-knit communities based around books, television shows, hobbies, and other special interests. My time on Tumblr has allowed me to become fluent in a new form of language, a type of English that exists only in digital spaces. Without access to facial gestures or vocal tonal shifts, written language has needed to evolve for a setting as informal as ordinary speech. Internet users have created a grammar out of misspellings, carefully placed punctuation, capitalization, and emoji. It is not limited to Tumblr; my time on other social media platforms, communicating with people through online messaging systems, and interacting with friends through texting all use the language of the internet. In spite of its prevalence, I rarely see people older than myself recognizing the ability of language to communicate casually through texts, emails, or posts on social media. The internet represents a new frontier in language, a wild west of communication that needs a dedicated linguist to categorize, analyze, and understand. 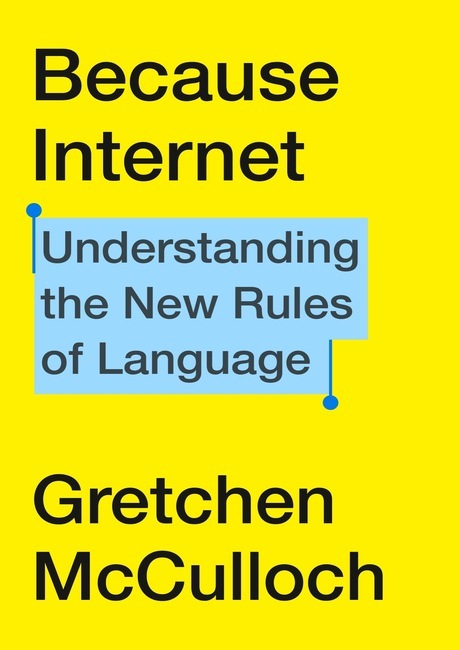 Gretchen McCulloch is one such linguist. Her book, Because Internet: Understanding the New Rules of Language, takes the internet’s ways of communicating as its subject. McCulloch, a self-described “internet linguist,” is a millennial fluent in internet-speak. She also has the resources, education, and grit to attempt to capture the internet into a single compact volume. Having encountered attempts to analyze internet communication in the past, I was hesitant, but McCulloch won me over in about eleven pages. During the first chapter, McCulloch discusses social, as opposed to formal, acronyms, including omg (oh my god), btw (by the way), and lol (laughing out loud). When I use these acronyms, I never capitalize them. Capitalization in internet communication is already a tricky thing, with some people I know going out of their way to write all in lowercase, but traditional acronyms like NASA, DNA, and AIDS are displayed in all caps. Some publications consider it proper to capitalize all acronyms in this style, regardless of how they are actually used. To me, this is an immediate giveaway that the writers, editors, and publishers behind articles about newfangled acronyms never use the acronyms in their daily lives and have no actual understanding about their use. When McCulloch writes that she “made the stylistic decision to write social, internet acronyms in all-lowercase,” I know that this was the book for me. Because Internet is not a discussion of internet language from the perspective of an outsider, but rather from someone who is not only fluent in internet-speak but also passionate about it.

I am an outsider to the field of linguistics, but McCulloch made me feel welcome. Part of this is the subject matter, which I know well, but much of it comes from her informal tone and willingness to explain specialized concepts. She discusses every idea in just enough detail for me to understand without drying up the subject matter. She also contextualizes the terminology that she uses, framing it in such a way that I felt connected to her ideas. For example, McCulloch divides internet users into five categories. She starts with the Old Internet People, who got involved with the internet in the earliest years, when a person needed programming skills to do anything online. She continues on to the Full Internet People, the group that she includes herself in, who got involved with the internet as a way to engage with new communities. In the same wave as the Full Internet People are the Semi Internet People like my parents, who treat internet culture as an extension of their real-world personal or work lives. Finally, the last wave of internet people includes the Pre Internet People like my grandparents, who have as little interaction with the internet as physically possible, and the Post Internet People such as myself. Initially, I resisted her classification, but she explained that Post Internet People are internet users who “don’t remember the first time they used a computer or did something online” much in the same way that previous generations don’t remember the first time they watched television or used a phone. I found that her classification made sense and helped me to understand how people interact with the internet. I feel comfortable communicating on the internet, but McCulloch reminded me that there is still a lot I can learn.

Because Internet covers a wide range of topics, from internet people and tone of voice to emoji and memes, because the internet is a complex place with a specialized and challenging language. Without that language, navigating the internet is difficult. Because Internet is both a key to that language and a celebration of it. It takes a little-understood topic that I see almost no love for in the world at large and elevates it to something worth studying. It acknowledges and embraces the internet as the future of language. Above all, it is a testament to the idea that in order to understand something, one must first appreciate it.

Levi Coren is a Post Internet Person. He spends objectively too much time mired in a small variety of toxic social media cesspools. In spite of his passion for the growing legitimacy of internet culture, he is completely out of touch with the internet lingo of people only a few years younger than him.