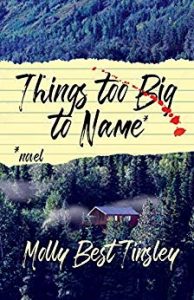 In a fit of sanity, award-winning writer Molly Best Tinsley resigned from the civilian faculty of the US Naval Academy and moved west to write full-time. She is the author of My Life with Darwin (Houghton Mifflin) and Throwing Knives (Ohio State University Press), she also co-authored Satan’s Chamber (Fuze Publishing) and the textbook, The Creative Process (St. Martin’s). Her more recent books are the memoir Entering the Blue Stone and another Victoria Pierce spy thriller, Broken Angels, the sequel to Satan’s Chamber. She is also the cofounder of Fuze Publishing.

Tinsley’s fiction has earned two fellowships from the National Endowment for the Arts, the Sandstone Prize, and the Oregon Book Award. Her most recent book is the literary thriller Things Too Big to Name.

Ed Battistella: Where did the idea for this novel come from?

Molly Best Tinsley: The short answer is I don’t really know. I do know the incident that got it started: I was driving home at twilight, minding my own business, when a stag with impressive antlers jumped out of the woods and hit my car. The animal disappeared, and my car was totaled, though I managed to drive it the rest of the way home without power steering.

The event left me shaken and whiplashed and feeling terrible that somewhere in the woods on the other side of the road, a large, stately creature was dying a slow death. I turned to writing about what had happened as a way of managing the traumatic effect. I thought it would become a short story, but it just wouldn’t settle into the confines of that genre.

Then during one writing session, the car’s driver, Margaret Torrens, staggered into her kitchen to find the ghost of her deceased husband waiting to engage her in conversation. Neither I nor Margaret believes in ghosts. But for some reason, we both realized we should accept this one. For one thing, he arrived bearing a pretty detailed backstory about the seven years of their young marriage that ended with his early death.

At that point, I began trailing my intuition, often reluctantly, as it suggested what would happen next.

EB: Can you say a bit about the title?

MBT: I’m pretty uninspired when it comes to titles and the file name for this narrative was deerstory for the longest time. By the time I’d completed a zero draft, though, the deer had become a minor player, and I actually had a braid of three different stories covering three different time frames and thematic territories. I went through the manuscript looking for a phrase that might apply to all of the above and landed on a message Margaret receives from her own heart: “Trust in things too big to name.”

I realized that I’d been working with all sorts of “big names” in my text and finding they didn’t come close to encompassing reality. Words like soul and death, love and evil, fidelity, justice, sacrifice–these are crude simplifications of the agonies and ecstasies life puts us through. The more I revised, the more I played on that note, and I’m satisfied now with how the title works. 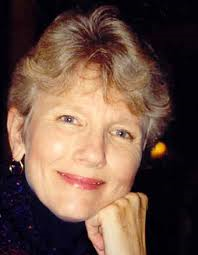 MBT: Initially, Margaret and I were the same person; I invented her in order to process my own difficult “deerstory” by telling it through her. I fleshed out her past as an academic with my own anecdotes. And I understand her cultural despair and her craving for solitude. But as the story began to grow, Margaret became more and more autonomous.

Our separation became absolute maybe halfway through the zero draft. In the process of reading an article about the interrogation of Edward Snowden, I was taken with the tension of his situation, the cat-and-mouse game, the hovering possibility of an unreliable narrator surrounded by “helpers” he can’t really trust. I wanted to capture all that with Margaret, and so I cut her loose. Faced with a decision-point in the action, I could no longer ask myself, “What would I do?” I had to check with Margaret, who was more innocent than I and also, I think, more brave.

EB: Who was the easiest character to write? And the most difficult?

MBT: The psychologist, a man in his late 30’s, came to life most slowly. His immediate job is to evaluate Margaret’s sanity after an act of violence, but I had no idea when I started who he was beyond a “Qualified Mental Health Professional” working for the criminal justice system. His official title itself invites irony, and it was tempting to consider him Margaret’s antagonist, and set her up to get the better of him. But the world isn’t that simple, even when it’s a fictional one. The psychologist seemed to be taking sides, but his position kept shifting. I had to wait until the end to find out where he would come down.

Jane, Margaret’s former student, was also slow to become herself. Still beautiful in middle age, this former California girl, with her blond hair and blue eyes, had outgrown one stereotype by the time she’d graduated from college, thanks in part to Margaret’s chilly mentoring. But it took constant nudges and shoves to keep her from slipping into some other one.

Meanwhile Victor’s appearance well into the story began a hostile take-over of the antagonist role. He was probably the easiest character to write because he was unpredictable, tactless, and he made things happen.

EB: I was taken with the wonderful writing and some of the turns of phrase you use—like referring to one character’s “stay thither look.” I wonder if, as a writer, you have an inventory of turns of phrase that you’re waiting to deploy.

MBT: I like your choice of the word “deploy” because writing a story is so much a matter of conscious strategy—how best to hook your reader in then keep her turning the pages to find out what happens next. And at those times when propulsion lags, you need to offer different surprises, of diction, imagery, wordplays, to hold attention.

I used to keep a Writer’s Notebook to catch phrases, metaphors, bits of dialogue, character studies that a day would offer. It’s a good idea, and I’m not sure why I stopped, maybe because I realized my process took a different route. Whatever I’m working on, I tend to channel into it the material that arises in real time. I bump into people whom, I decide, certain characters can look like or sound like. I notice things in my own setting to fill out a fictional one. I come across something in the paper that provides a key incident in a story. As for turns of phrase, my greatest pleasure in writing is playing with style, finding original ways to connect words. I can get absorbed for an hour with finding the right phrase when I should be building and making alterations to structure.

EB: I’m also curious about how you decide what to write. You’ve crafted plays, literary fiction, spy thrillers, a memoir, a middle-grade novel, and a creative writing textbook. What motivates you to take up a particular project or form?

MBT: I suppose that if my first novel (My Life with Darwin, Houghton Mifflin), a work of literary fiction, had been a blockbusting success, I might have stuck with that sub-genre and built my career around it. But it didn’t, and my mainstream publisher lost interest in a collection of short stories I’d put together. Thus after I found a home for that volume myself with Ohio State University Press, I turned to playwriting, where I’d had some surprising success. The collaboration involved in staging a play was new, stimulating, expansive. It taught the importance of structure and propulsion, and though I wound up setting aside narrative for many years, when I returned to it, it was with a stronger grasp of storytelling.

In a way, I shifted literary genres in a search for both technical growth and an audience. But it’s also true that certain ideas come with genre attached. The middle-grade novel, Behind the Waterfall, conceived in collaboration with my twin grandsons, could only be a middle-grade novel. Some topics seemed to lend themselves to drama, others to narrative, and the plots that became spy thrillers didn’t leave room for the more leisurely pace of literary fiction. As I mentioned, Things Too Big to Name refused the constraints of a short story and insisted on becoming a novel.

EB: Your narrative technique involved a number of flashbacks. How did you manage to maintain order?

MBT: Though Things is a first-person novel, the narrator, Margaret, is actually braiding three different stories. One took place in the distant past; another in the recent past; and the third in the present. As each strand unspooled, I began to realize I also had three different narrative voices, determined by who the audience for the story was and what Margaret’s purpose was in delivering it. In the immediate present, she keeps a hidden journal for herself to keep track of her sessions with a psychologist she cannot trust. He has requested that she compose an account of the recent past, and carefully, strategically, she does so. More spontaneously, she writes letters to the ghost of her husband and in the process comes to terms with their brief, flawed relationship and his death.

This might sound confusing, but it was the distinctness of each voice that helped me sort out the way they fit together and what information was available to each.

EB: What was the toughest decision you had to make as a writer in crafting this book?

MBT: I fought a lot of inner resistance in following where this story was taking me. It felt like too dark a place, and it required research I didn’t want to be identified with. So it was tough to keep going. I’m content that I did because the book wound up representing the times I fear we’re living in now.