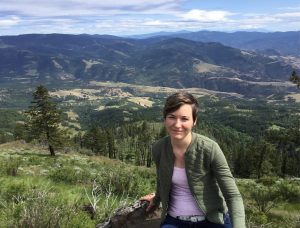 This spring, I had the privilege of conducting an oral history with nine Southern Oregon lesbian separatists and land lesbians. This demographic was brought to my attention by SOU researcher Maureen Battistella as I was nearing the completion of my undergraduate degree in History at Southern Oregon University. Before 2019, I had little awareness of either of these movements, let alone the fact that the area I live in is home, or home away from home, to over a hundred of these women, the majority of whom are now in their 70s or 80s. During my research, I learned that lesbian separatism was a movement that emerged out of radical feminism in the early 1970s and called for women to remove themselves from the world that men have made and pour all of their sexual, economic, and political energies into other women as a means of achieving the goals of feminism. At the same time, land lesbians, many of whom did not resonate with some of the militant and anti-men extremities of separatism, were inspired by the Back-to-the-land Movement and were similarly dedicated to rural, women-only land.

Getting in touch with these women was not easy, as many are understandably quite protective of their privacy. When I was finally able to make contact through email addresses listed in a 2011 Curve Magazine article, I was thrilled. During this exploratory period I also submitted paperwork and received SOU Institutional Review Board approval. Over the next two weeks, I spoke to several land lesbians over the phone as they sought to ascertain if I was someone with whom it was safe to share their stories and beliefs. As a woman married to another woman, I had an immediate relatability that undoubtedly helped to set them at ease. Soon I began to schedule interview appointments, ultimately visiting three women’s lands. Of the nine women interviewed, five were video record, one was audio recorded, and three were sent a dozen or so questions via email.

I went into this project with a variety of possible points of focus concerning these women’s ideologies and legacy, but was surprised when my research was led in an entirely new direction after several women initially brought up concerns around the transgender rights movement, a point of contention of which I was only minimally aware. I found that while this is far from the only issue that these women are passionate about, many are deeply concerned about what they describe as the mounting pressure from the queer community for butch women to transition to male, the violent demands for trans-women’s inclusion in “womyn-born womyn” spaces, and other similar concerns.

To be clear, those who live on or frequent women’s land hold a diversity of opinions regarding the inclusion of trans-women. The spectrum varies from fully embracing trans-women as women and welcoming them onto women’s land to excluding them from these spaces for a mixture of deeply held reasons. Though trans activists are not currently knocking on the doors of Southern Oregon lesbian land communities, each of the nine women I interviewed has thought at length about this issue and each believes that they are justified in maintaining spaces that include only women who were assigned female at birth and have lived their entire life as a woman. My work, “Lesbian Nation: Separatism, Women’s Land, and Trans-inclusion,” traces the history of lesbian separatism and women’s land while documenting the reasons these particular advocates for women-only space do not believe trans-women are a fit for either some or all of their spaces and events.

Undoubtedly, several of the views recorded in my work are controversial and offensive to segments of society. Yet, I believe this historical record is extremely important and valuable, both to those of like mind and those in opposition. However, we unfortunately find ourselves in an increasingly intellectually segregated society in which the norm is to avoid discomfort, suppress what is offensive to us, and practice selective listening and selective study. This means that it is becoming more and more common to only research and read perspectives that align with one’s own. Because of this gradual societal shift, it is often assumed that if you are reading a particular book, taking a particular class, or listening to a particular commentator, you are of that ideological persuasion. I encountered this on two separate occasions when telling a close family member and then later an acquaintance about my research. They both immediately expressed concern that I was holding what they believed to be radical beliefs. They instantly assumed that by undertaking this project and choosing to study this demographic, I must be in ideological alignment with my subjects. In fact, aside from the constant quest to be aware of and transparent about my own implicit and explicit biases, my personal beliefs and to what extent I agree or disagree with the theory and aspirations of “womyn-born womyn” spaces, are largely irrelevant to my research. My job as an aspiring historian is to work toward impartially recording and relating the events and beliefs of the past and present, not only those that align with my personal worldview.

But what of those historical realities that some label the dark side of human thought? I would go so far as to say that there is no viewpoint that is too dangerous to be recorded and accessible. Perhaps that is a somewhat uniquely American value, but I hold it quite dear. Everything that has happened in the past and all the ideas behind the events, have value of a kind because it is all precious knowledge and can do much to illuminate the present. Conversely, when portions of history are excluded from study, certain historical beliefs and realities are minimized, and sometimes nearly erased, leading to dangers of naiveté, shortsightedness, and ignorance. The oft-quoted Edmund Burke’s assertion that “those who do not know history are doomed to repeat it” is in fact devastatingly true.

While undoubtedly all ideological positions past and present do not possess equal merit and certainly all positions do not deserve the same time, platform, and visibility, every feature of the past should be recorded for posterity and accessible for research and understanding. This is the job of the journalist, historian, sociologist, and anthropologist. Additionally, historians do well to avoid moral commentary in their work. I aspire to trust the intelligence of my future students and readers and to allow them to determine for themselves shades of right and wrong, good and bad, without interpolating my own moralizing judgments.

One effective means of giving voice to disparate historical memories is oral history. From the lips of the people themselves, oral history provides a glimpse into the why behind the beliefs and actions of those in question, providing vital insight into human nature for the religious leader, policymaker, philosopher, activist, psychologist, or voter. In a sense, oral history is really just the practice of empathy, listening to diverse views and life experiences in order to understand what has led a person to think and act as they do. Rarely do beliefs arise out of thin air. Rather it is life experiences and context that propels people forward into disparate belief systems and ways of living. Accessing oral history gives the listener or reader the opportunity to put themselves in the shoes of another.

In the specific instance of the debate over trans inclusion, much of the rhetoric on both sides is characterized by caricature and a lack of empathy. My aspiration is that this work, written by someone who has is neither a trans activist, nor a champion of women-only spaces, could provide useful insight into the motivations and convictions of separatists and land lesbians. I believe that an oral history of trans-women seeking inclusion in these communities is also in order.

Truly listening to one’s ideological counterpart is increasingly rare in America today and consequently the “other” is easily dehumanized and villainized. Without hearing opposing positions, positions that may feel offensive, one can never understand those who think differently and no two sides will ever be able to hear each other speak. Listening does not mean that one will or should change their beliefs, but it does enable them to begin to disagree well, to present a compassionate and informed disagreement, devoid of caricatures.