An Interview with Phil Busse, author of Southern Oregon Beer 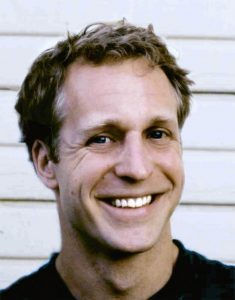 Phil Busse is an Oregon writer and publisher. Raised in Wisconsin, he graduated from Middlebury College in Vermont, and began as career as a journalist with the San Francisco Weekly. He has written for the Eugene Weekly and helped start the Portland Mercury, where he was managing editor. Busse is the executive director for the Media Institute for Social Change and is the publisher and editor for the Rogue Valley Messenger, which provides news, entertainment and reviews to southern Oregon.

Southern Oregon Beer: A Pioneering History, his first book, was published in 2019 by the HISTORY Press as part of its American Palate Series.

Ed Battistella: How did you come to write a book on the history of Southern Oregon beer?

Phil Busse: I helped start the Rogue Valley Messenger six years ago—and have been the Publisher for the paper. Part of that job is writing beer reviews now and again. Last summer, I received an email from a publishing house asking me to write a book about the history of southern Oregon breweries. It was completely out of the blue.

I took a day to do some quick research to see whether there was even a story there—and quickly found some fascinating stories and characters, and wrote back to the publisher saying, “heck yeah!”

It was such a fun project to research – to learn about the dusty gold rush days of Jacksonville, to learn about how the railroads impacted local economies, to find out how big the hops industry was in the 1920s, not completely unlike the weed industry is today! It was just a great vantage point on history. I had so much fun researching this topic.

EB: The origins of brewing in the region seem to be in Jacksonville. Why there?

PB: Starting in 1851, Jacksonville was a gold rush town—a gold rush that coincided with a massive immigration of Germans; more than 1 million Germans arrived in America in the 1850s, with many finding boom towns like Jacksonville where they could make an impact and with a decent number of those Germans with beer brewing talents (Miller, Busch, Coors, Weinhart; these were all German immigrants arriving in America in those years). In the 1850s, southern Oregon was fairly desolate, but these settlers came with ideas about striking it rich—and a couple decided that starting up breweries for the their miners would be their ticket.

It was extremely isolated, though, so it is amazing that breweries started. Consider not only how tough it was to get the basics like wheat and hops, but to drag cooper tanks across the mountain passes!

EB: Some of the earliest breweries were run by women. Tell us about Fredericka Wetterer and Marie Kienlen, who you profile in the book.

PB: Yes, it is amazing that half of the breweries in southern Oregon in the 1880s/90s were owned and run by women. Beer brewing has been – and continues to be – a male-dominated profession, but in the late 19th century, it was a different story in southern Oregon.

Fredericka Wetterer was a German woman in Jacksonville. She came from a family of brewers, and outlived her husband who had started one of the first breweries in Jacksonville. She was interesting in the records she kept. Hundreds of receipts that helped tell the day-to-day story about running a brewery back then—about buying bales of hops from the Willamette Valley, about doing business with Henry Weinhart.

Marie Kienlen was a bit more zany. She was a French woman who landed in Grants Pass, and walked around town with parrots on her shoulders. With her husband, she bought a brewery – which, in turn, burned down. They rebuilt on the same spot, a brick building that today is Climate City Brewery. Unlike Fredericka though, there weren’t many records kept by or about Marie. Even basic information – like her birthdate – was impossible to pin down.

Even so, these two women give a lot of insights into what it was like to run a business in southern Oregon at the turn-of-the-century.

EB: There are some interesting historical and contemporary photos and lots of observations from the newspapers of the early years. What was the research like for you? 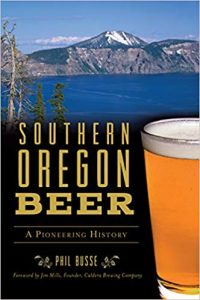 PB: Researching this book was both fun and like trying to solve a mystery. I was trying to piece together information to build a picture about what life was like. I found a number of great resources. Southern Oregon Historical Society was fantastic; just really wonderfully kind, helpful and interested in what I was doing. And, there were a couple databases of newspapers that gave me contemporary insights into people’s lives back then.

The book also talks about what is happening now, and has been happening for the past quarter-century. For that, I had a number of interviews with brewers, who all were excited to talk and share their thoughts—and beers.

EB: What was the impact of prohibition? How did brewers cope with that social change?

PB: Obviously, Prohibition had an impact. It shut down the breweries for 15 years (more in Grants Pass, which passed a resolution a full decade before the rest of the country). Interestingly, though, there were other market forces that were as big and damaging. I was surprised to learn that the peak of breweries in America was in the 1870s, with more than 4000 breweries, a number that wasn’t surpassed again until 2005!

The decline in that number started decades before Prohibition and was all about consolidation – and about local economies being undermined with national products like Budweiser came about and had distribution from a nationwide network of railroads. It isn’t a completely different story from what we’ve been seen in the past 20 years with the internet; a tension between locally-produced products and those easily available from national companies.

There was an upstart brewery in Medford, for example, but that was bought out by the Portland-based Weinhart, which was a big regional force.

It was a double whammie to local breweries – first, trying to compete with national brands and, second, becoming illegal from Prohibition. By 1933, when FDR lifted Prohibition, the number of breweries had sunk into the several hundred. It has taken decades for the diversity to recover.

EB: One of the results of prohibition was a ban on homebrewing, which lasted until the 1970s. How did Oregon become such a center of the homebrewing and then the craft beer movement?

PB: I’m not sure why Oregon became such a hub for homebrewing; really, all of the west coast. Maybe it is the pioneer spirit and spunk, or the notion of doing-it-youself. But yes, even after Prohibition was lifted, homebrewing was still illegal for five more decades. This was like removing the minor leagues from baseball; there was no training ground for small breweries to come up through.

Once legal again, though, there is a boom with small breweries. Something like 90% of that first generation of small breweries came from homebrewers; in southern Oregon, that was guys that started Walkabout and Caldera, and Wild River Pizzeria’s craft brewing.

EB: Any predictions for the future of Southern Oregon brewing?

PB: That’s a tough question. I like to think that the trend towards regional breweries will continue.

Southern Oregon Breweries really are gems—places like Portal and Opposition and Conner Fields that are so tied to their community. That is the spirit of the mid-19th century breweries that served as adult community centers in a way. I like to think that philosophy will only deepen. The economic trends seem to indicate that, although it can be a tough business, and is increasingly competitive.

EB: Where can readers get Southern Oregon Beer?

PB: The book is available at most book stores, and online at Amazon. I will have some readings and events in southern Oregon in late September and early October. I have a barnstorming tour, stops at Bloomsbury Books and also at various breweries and other events. We will announce those in the Messenger.

EB: Thanks for talking with us. Cheers.

PB: Cheers! I appreciate the interest in the book. I really am happy for the opportunity to share the history that I was able to piece together and write about.

Edwin Battistella’s latest book Dangerous Crooked Scoundrels will be released by Oxford University Press in March of 2020.
View all posts by Ed Battistella →
This entry was posted in Ideas and Opinions. Bookmark the permalink.