An Interview with Amy Anne Layton

Posted on December 7, 2018 by Ed Battistella 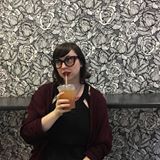 Amy Anne Layton is a Library Circulation Assistant at Simmons University Beatley Library. A 2016 graduate of Southern Oregon University, she taught in France from in 2016 to 2017.

Ed Battistella: Tell us about the program you taught in? How did you find it? What was the application and training process like?

Amy Anne Layton: I taught through TAPIF—the Teaching Assistant Program in France. It employs and salaries over 1,000 French majors to help teach English abroad in France for seven months. I found out about this program through the French program at Southern Oregon University. Normally, at the end of our time there, we’re required to either work at an internship abroad for 10 weeks minimum, or something equivalent to that.

TAPIF required letters of recommendation on the topic of your French education, a written sample of our French, and our University transcripts, among other information such as passport information.

Training took place twice, in which every assistant in a district met at a centralized location to learn about French bureaucracy, documentation, school rules, and government, among other societal things we might not have learned about in school. The second training focused on creating lesson plans for younger and older students.

AL: In all honesty, my interest in teaching abroad paralleled my interest in graduating with a degree in French culture. It was essentially required for me, so I had no choice but to get excited!

AL: I think I would be lying if I said yes. The biggest shocks that came to me were more based on the fact that I lived near a city than anything else. I’d never taken public transportation before, nor commuter trains, and there were a lot of other big firsts that I hadn’t experience prior to living in France. After my initial Oh God What Did I Just Do reaction during my first night abroad, it felt like I was on vacation, and then I felt like I was at home. French folks typically have some understanding of English, and everyone there showed me such great kindness, so it was easy to just fall into step!

EB: You had studied French before going. What has the experience like of living in France?

AL: Absolutely incredible. There is still not a day that goes by that I don’t think about or wish that I was living in France still. In all honesty, and in retrospect, I think that French Amy is the best Amy to have so far existed. Being so far removed for seven months from all you’ve ever known is a frightful experience, but it’s one that helped me center myself and realize just how proud of myself I should be.

In terms of the language—I lucked out. I had fantastic professors to teach me French, and it certainly helped that my roommates in France knew English and were able to help me process my thoughts when I was trying to speak French. Not only that, but I was happy to visit some French exchange students from the prior year at their towns, where their families introduced me to classic French films (without subtitles!), their families, and ways of going about life.

EB: What were people’s attitudes about English and learning English?

AL: My students’ attitudes were about the same as those learning a foreign language in high school here in the United States. The ones who were more proficient and fluent were typically in other advanced classes and had more opportunities to visit England than those who were only interested in learning the bare minimum to pass. In France, I think it’s safe to say that those who know and had an affinity for learning English were viewed as more privileged than those who had a harder time.

AL: None at all! I had the wonderful opportunity, however, to work with Professor Margaret Perrow for an independent studies class in which I analyzed various struggles and eases English language learners had in regards to learning English.

AL: Yes. If you’re a woman going abroad by yourself, people are going to love the fact that you’re foreign. Especially men. Watch out for them. I thought men were terrible when we spoke the same language, but they go above and beyond when there’s a language barrier and you’re on their playing field. I was in a generally safe area and spent much of my time alone, but men will take advantage of the fact that you don’t perfectly speak their language. They will take advantage of the fact that you’re alone and newer to the area. Use your best judgement, use your instincts.

That isn’t to say that every single French man is terrible, however. Two drove me to my Airbnb when they saw me struggling with my suitcase. Another showed me around Montmartre. One cashier engaged me in conversation every time I went to the grocery store. There are kind people out there. But there are also scammers, creeps, and your every-day dudes who think it’s okay to harass you. Their behavior is never okay, but if you’re empathetic and sensitive and a little shut-in like me, it’s necessary to grow a thick skin, and fast.

EB: Any suggestions for others considering teaching abroad, especially in Europe?

AL: Money is sadly still a necessity in this world. TAPIF encouraged us to have at least $2000 prior to taking off for our assistantship—it’s enough to hold you over until your first paycheck.

Airbnb is your friend! It takes a while to find a place to live, especially if you get placed in a smaller town like me. Airbnb can help take a lot of stress off of you when scouting out apartments and rooms.

Do touristy things. Have no shame. Buy the best champagne when you go out, get the best seat available for the opera. This is your time, and you should use it however you want to.

And ultimately? Have a blast.

AL: Of course! Thanks for listening.