An Interview with Vyvyan Evans 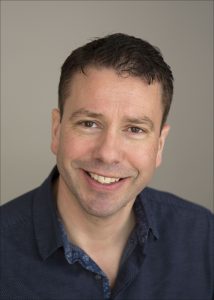 Vyvyan Evans received his PhD in Linguistics from Georgetown University, Washington DC., and has taught at the University of Sussex, Brighton University and Bangor University. He has published 14 books on language, meaning, mind, and digital communication, including The Crucible of Language: How Language and Mind Create Meaning (2015); and The Language Myth: Why Language is Not an Instinct (2014). His writing has been featured in CNN Style, The New York Post, The Guardian, The Conversation, Nautilus Magazine, Newsweek, New Scientist, and Psychology Today.

His latest book is The Emoji Code: The Linguistics Behind Smiley Faces and Scaredy Cats.

Ed Battistella: How did you get interested in the emoji?

Vyvyan Evans:It was January 2015, and an editor from The Guardian newspaper, in London, contacted me. She was looking for a language expert to write an article about the world’s first alleged emoji terror threat: a teenager from Brooklyn, NY, had just been arrested under anti-terrorism 9/11 statues, for threatening the NYPD using emojis. The case made headlines, but the problem was, back in 2015, there was no one with expertise in how Emoji works as a system of communication; Emoji was still such a new global phenomenon. I took on the writing assignment, somewhat sceptically. But as I conducted the research for the piece, I began to see how Emoji as a communicative system, parallels aspects of the way in which language achieves its communicative functions. A couple of months later, a London-based telecoms company, TalkTalk, commissioned me to undertake research into Emoji usage in the UK. And from there I was hooked. I set aside the book I was working on, and began work on what became The Emoji Code, instead.

EB: What exactly are emojis?

VE: Emojis are the single character pictographic glyphs, the yellow smileys, winks, and so on, that populate the electronic keyboards of our smartphones and mobile computing devices. They were originally developed in Japan in the late 1990s for the world’s first commercially available mobile internet system on early smartphones. And since their incorporation as standard, on iPhones in 2011, they have become a global phenomenon. Since 2010, emojis have been regulated by Unicode, a California-based consortium of primarily multinational tech companies, that sets the international standard for computer fonts and displays. Unicode carefully vets proposals for new emojis, with rules as to what can and can’t be an emoji: branding is forbidden, as are emojis for persons living or dead and deities. While anyone can propose an emoji, the whole emoji vetting process takes around 18 months, before a new emoji is likely to pass muster, and make it from the drawing board to a smartphone near you or me. In 1999, when they were first introduced in Japan there were 176 emojis. As of June 2017, with the latest Unicode update, there are 2,666 officially-sanctioned emojis.

EB: I was fascinated to learn some of the intricacies of emojis, such as the fact that the images show up differently on different platforms. What other interesting facts did you uncover?

VE: Around 3.2 billion people, well over 40% of the world’s population, has regular internet access, and around 92% of those internet users regularly send emojis. On Messenger alone, Facebook’s messaging app, over 5 billion emojis are sent on a daily basis. Emoji is now a central feature of social media. Indeed, today the average person, during their lifetime, will spend over three years updating social media, compared to 12 months in a pub, and 235 days waiting in a queue. In the industrialised world, communicating virtually is increasingly replacing aspects of face-to-face and phone interaction. For instance, in the UK, under 25s now spend an average of 27 hours a week on-line, while even over 45s spend an average of 20 hours per week on the internet, which represents about double, in both cases, from a decade earlier. The world’s first arrest for an emoji-related terroristic threat took place in 2015, and in 2016 a French man was sentenced to three months in prison for using an emoji to issue a death threat. The world’s first political interview, conducted via emojis, involved the Australian minister for Foreign Affairs, Julie Bishop, and in 2015 Finland became the world’s first country to brand itself using bespoke emojis, the same year that Oxford Dictionaries, the world’s leading arbiter of English language usage, dubbed the ‘face with tears of joy’ emoji its word of the year.

EB: What surprised you most doing the research for The Emoji Code?

VE: The prejudice against emoji usage. Many otherwise educated and liberal commentators often seem to view Emoji as a joke, the communicative equivalent to an adolescent grunt. But this amounts to prejudiced cultural elitism, and fundamentally misunderstands the nature of communication. Emoji is more than a mere splash of juvenile colour. The fact that Emoji can and will be used in a court of law against you is testament to that. 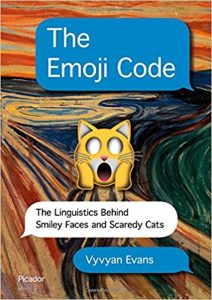 EB: In The Emoji Code, you mention that emojis are like paralanguage? What does that mean?

VE: In our everyday face-to-face spoken interactions, much of communication is effected not via language, but through nonverbal cues. For instance, according to one estimate, as much as 70% of our emotional expression may come from non-verbal cues. Paralanguage relates to the non-linguistic signals arising from the medium that conveys language. In spoken language, these include the rise and fall of our pitch contours, such as intonation. Paralanguage also includes involuntary aspects of the spoken modality, such as laughter, or a voice cracked from emotion. These non-verbal cues provide important information that complement, nuance and even change the meaning of our words. For instance, when you or I say “I love you” with falling pitch, as when making a statement, this is a declaration of undying love. But now try saying it with rising pitch, as if asking a question. It now becomes an ironic counterblast that lays someone low, and is probably best not said to your nearest if you wish to keep them your dearest. In similar fashion, Emoji serves a paralinguistic function in digital textspeak. Emojis helps nuance and complement the meaning of our otherwise, seemingly emotionally arid abbreviated digital messages. They help add tone of voice, and better enable us to nuance what our texted words actually mean. For instance, a text message that reads “Hey, so I tripped and banged my head on the kitchen cupboard”, becomes a plea for sympathy if followed by a crying face emoji. But with a laughing face, we are inviting our addressee to acknowledge our clumsy buffoonery. Either way, the emoji helps clarify what we mean by the words, much as tone of voice does in face-to-face interaction.

EB: You also point out that we “see” emotions. How so?

VE: Humans are primarily visual creatures; vision is our dominant sense. With the eyes open, two thirds of the brain’s neural activity relates to vision, while 40% of the brain’s nerve fibres are connected to the retina. And it takes just 100 milliseconds for a human to recognise an object. Moreover, we are extremely adept at using our visual smarts to read how someone is feeling, their emotional state, from their facial expressions. Indeed, humans use 43 facial muscles to make over 10,000 distinct expressions: these are reflexes of our undulating emotional selves. And many of these we use to interpret what others mean by their words, or how they are responding to and feel about ours. In digital textspeak, the large array of yellow emoji faces help us convey, and figure out the meaning behind our words. Around 70% of the world’s daily emoji usage relates to emotion, emphasising, or nuancing the meaning of our words. They provide powerful visual cues that convey emotional states, and can help highlight the meaning behind the words, from an eye-roll emoji, to signal that I’m being ironic, to the ubiquitous wink emoji, to tone down an otherwise face-threatening remark.

EB: It seemed to me that your book was about more than just emojis. It was an introduction to linguistics concepts using emojis. Was that part of your goal in writing The Emoji Code? What are some of the key linguistic ideas you explore?

VE: The rapid adoption of Emoji, in just a few years, makes it a rich (and well-recorded) case through which to explore the nature of human communication, including the nature and functions of language, and other nonverbal aspects of communication. Accordingly, my exploration of Emoji, as a system of communication, represents an opportunity to delve into a wide range of related issues. These include grammar prescriptivism, the evolutionary origins of language, the social and cultural factors that govern language use, language change and its development, as well as the nature and organisation of language, and what it reveals about the nature of the human mind, and how meaning arises when we communicate. My central thesis is that far from being some passing fad, Emoji reflects, and thereby reveals, fundamental elements of communication; and in turn, this all shines a light on what it means to be human.

EB: How do you think emojis will evolve?

VE: The future is notoriously difficult to predict. For instance, in one scene from the cult classic sci-fi movie Blade Runner, the main character, Deckard, played by Harrison Ford is in a bar. He makes a phone call to Rachel, with whom he’s falling in love, and invites her to join him for a drink. But while the future Los Angeles involves off-world colonies, cyborgs, or ‘replicants’ as they are termed, and hover cars, Deckard, in the film, places the call from a hard-wired phone, on the wall. Apparently, foreseeing the invention of mobile phones was a step too far for the 1982 movie.

This issue is even thornier when considering human communication. From the perspective of technological innovation, we are living in a digital age: technology is transforming the ways we communicate with one another, and interact with the world around us. But while the creative directors of Blade Runner inhabited an era before cell phones, texting, and now mobile internet-based computing have changed the way we communicate. Moreover, other technological pipe dreams that were once only the preserve of science fiction are now becoming reality. For instance, John Anderton, the character played by Tom Cruise in the 2002 movie Minority Report – originally a book by Philip K. Dick, as was Blade Runner – wears a data glove, providing a sophisticated gesture-based interface system. But touch-based computing is now de rigeur, with the pinch, pull and swipe features of Apple iPads and iPhones having led the way in the 2000s. In terms of computer gaming the Wii, in 2006, and later, Microsoft Kinect consoles developed similar ways of interacting and controlling virtual characters and actions. Devices such as these are surely but a prelude of what is to come.

We might speculate on how Emoji will develop—in the short term, animated, avatar-like emojis might be one way in which textspeak can be further enhanced by multimodal cues. Facial expressions and gestures are what make us who we are: let’s see it, and not be afraid of seeing it, in Emoji! But whatever the next stage in the evolution of Emoji, the driver is, ultimately, the cooperative intelligence that makes us the embodied communicators we are. And in this regard, Emoji makes us more effective communication in our 21st century world of communication.