An Interview with Kirsten Johanna Allen of Torrey House Press 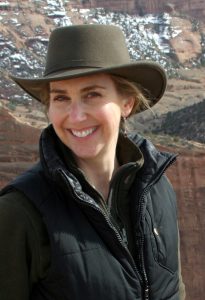 Kirsten Johanna Allen is the publisher and editorial director of Torrey House Press, based in Salt Lake City, Utah. Torrey House Press is an independent nonprofit publisher dedicated to publishing diverse voices with transformative stories of the American West and developing literary resources for the conservation movement.

Ed Battistella: How did Torrey House Press get started?

Kirsten Johanna Allen: Mark Bailey and I have long loved writers like Wallace Stegner, Terry Tempest Williams, Rachel Carson, Ed Abbey, and as we got more familiar with the degradation of the West’s mountains and deserts due to public land management problems, we realized one of the best ways we could help is by publishing the works of the next Stegner and Carson. We founded the press as co-publishers in October 2010 and published our first title the following summer. Mark has stepped back from day-to-day operations and I am now publisher.

EB: Torrey House is unique in that it has not just a regional mission but is organized as a non-profit. How did you decide on that model?

KJA: Creative work always has to be subsidized because it doesn’t pay for itself. Big publishers subsidize their economically risky fiction and creative nonfiction with blockbusters, and many terrific hybrid publishers share the financial risk with their authors. We’ve admired the work of independent literary presses such as Milkweed Editions and Coffee House Press, and, as it typical for them, Torrey House Press book sales revenues cover only about 50% of expenses so contributions are critical to publishing the books that fulfill our mission to promote conservation through literature. We became a nonprofit so donations could be tax-deductible for our contributors and so we could apply for grants.

KJA: I first fell in love with the outdoors as a child visiting my grandparents’ ranch in eastern Nevada, and I think I’ve always loved books. I combined the two in college, writing a thesis on Wallace Stegner’s use of landscape. My education and professional background includes a master’s in public health from the University of Utah School of Medicine and a bachelor’s in English from Westminster College; 25 years of private piano instruction, 25 years of freelance editing experience, and five years teaching college English composition; board membership with nonprofits; and a lifetime passion for the West’s fantastic landscapes.

EB: Torrey House publishes both fiction and non-fiction. What do you look for in a book?

KJA: In both fiction and nonfiction, I want a book that draws me in transparently. I want to not realize I’m reading, to be engrossed in the story without distractions. I find that often it’s common errors that trip up the writing, especially repetition, multiple verb phrases, and thinker attributives like realized/thought/remembered.

KJA: Because Torrey House Press is small—we’re two unpaid staff and two part-time paid staff—deciding to work with an author is adding a new family member so we want to be sure we’re a good fit. We care deeply about every title—each one feels like a new baby we’ve midwifed—so writers get our whole hearts as well as our expertise. Authors who sign with Torey House Press need to believe in our mission to promote conservation through literature as much as we do, and need to demonstrate their commitment to working as partners with us in the all-important work of developing a readership for their book. 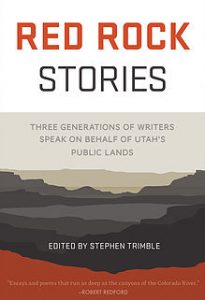 EB: You been involved in the campaign to save the Bear Ears and have a books out called EDGE OF MORNING: Native Voices Speak for the Bears Ears and RED ROCK STORIES: Three Generations of Writers Speak on Behalf of Utah’s Public Lands. Can you tell us a bit about those books and some of the events surrounding them?

KJA: RED ROCK STORIES was first printed as a limited edition, art-as-advocacy chapbook, Red Rock Testimony, and editor Stephen Trimble and I went to Washington, D.C. took copies to Obama Administration officials in June 2016. Chapbooks were also sent to every member of Congress as decision-makers deliberated between a destructive public lands bill and a national monument proposed by the Bears Ears Inter-Tribal Coalition. On December 28, 2016, President Obama established Bears Ears National Monument, and in June 2017, this historic collection was expanded and published as a trade book, RED ROCK STORIES, in celebration of protecting exquisite and sacred landscapes. I first started looking for an editor for EDGE OF MORNING in August 2015, contracting with Navajo/Yankton Dakota journalist Jacqueline Keeler in January 2016. Jackie contacted Native writers, activists, leaders, and poets, and the collection she developed speaks to the power of sacred landscape and the importance of Native sovereignty for Native and non-Native Americans alike. The book has anchored events and conferences including the White Privilege Conference where Jackie was a keynote speaker. She is now working on a book exploring sovereignty and sacred lands through the the 2016 standoffs at Standing Rock and the Malheur Refuge.

KJA: Independent publishing brings a variety of thought, stories, and authors that keep our culture lively, rich, and diverse. Just as a healthy meadow or riparian area requires both dominant plants and animals and a host of less dominant flora and fauna to function successfully, the world of books and ideas needs both big and small publishers to expand human thought and experience.

EB: What have you learned since beginning your press?

KJA: That it’s difficult and expensive to sell books. And that the best thing about publishing is the people—from authors and readers to librarians and booksellers and other publishers, the community is comprised of the most interesting and generous folks on the planet.

KJA: Workshop your book with other authors or editors many, many times before considering submitting it to a publisher or agent. When querying an agent or publisher, remember that your pitch needs to be about them not you. Understand what that particular agent or publisher is looking for and show how you and your book fit with their needs and culture.

KJA: Thank you for all you do for books and ideas!